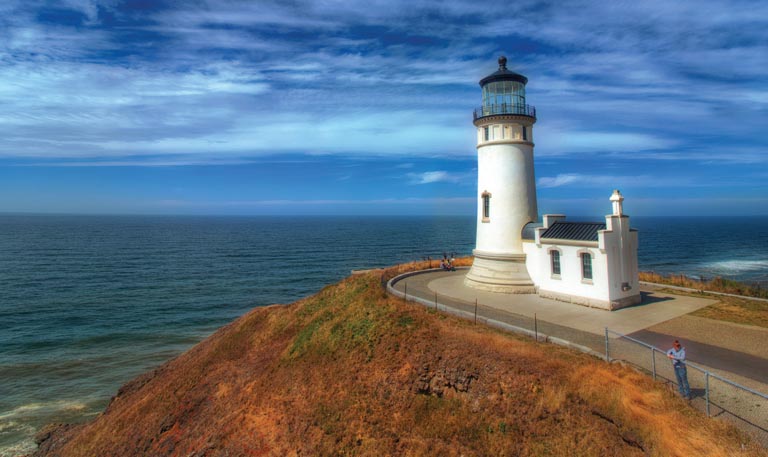 If a road trip disappoints, it might be because of the baggage you carry.

“What about shooting from up here?” I say to my friend, George.

I stand on a picnic table, looking across a massive buffer of ocean driftwood. Huge logs and gnarly limbs, bleached like dinosaur bones, form an uncrossable mound.

Beyond them is the beach. And beyond the beach rises Cape Disappointment Lighthouse, a solitary chess piece atop a wave-battered cliff jutting far into the sea.

“We got to get down to the beach,” George says, climbing to stand beside me. He claps a big hand on my shoulder, steadying himself. Then, wincing and rubbing his right knee, he climbs back down.

Barely five weeks ago, George underwent four hours of knee replacement surgery. The surgery should have been two months earlier, but COVID-19 had a way of switching hospital priorities around.

“George” is George Stenberg, a regionally prominent professional photographer known for his dreamy, hyper-real Hood Canal panoramas. Only a few days earlier did he finally feel well enough to join me on this road trip, hoping to get some rugged coastline shots to add to his inventory. And on this day, we’re both worried he won’t be able to take a single shot if his knee gives out.

We are the same age, 64, and have known each other for five years. Still, I have never been on a trip with him, and in some ways we are very different—2020 presidential politics, for one, and while I am married, George remains born-again single after a distant divorce.

We decide to drive to Long Beach for lunch. As we wind below the big, leafy trees of Cape Disappointment State Park, the late summer sun strobing our faces, my awareness of our differences grows.

I harbor a secret, fleeting worry that as the hours pass and we soon find ourselves in a motel together, poor George will come within howling distance, not exactly of a wolfman, but what my wife, Linda, calls the “Snore of the Century.”

Linda, God bless her, has endured 22 years in the same bed with what my entire family regards as nothing less than the sound of a water buffalo snared in a trap. After three days at my sister-in-law’s place in Phoenix, for example, I noticed the breakfast table just happened to have a medical equipment catalog parked next to my plate, open to the page on CPAP machines.

George is less subtle. I worry I’ll wake to a madman wrapping a plastic bag over my head.

In Long Beach, we catch a hearty meal of chicken fried steak, eggs, hash browns, biscuits, and gravy at a place called Benson’s by the Beach. Loading up on carbs seems like a decent decision, as we face a long hike to get into position for lighthouse sunset photos.

Since afternoon light is too glaring for good beauty shots, we decide to walk about the gaudy, helter-skelter facades that line the strip in Long Beach, Washington’s surf-side town with Coney Island aspirations.

Already the crosswalks are crowded with parents, their hands tugging or being tugged by children drawn to the many ice cream, doughnut, kite, and T-shirt shops. Masks cover their nose and mouths, in fact, a powder blue surgeon’s mask lying against the curb has me thinking that masks are now the new litter. A mini merry-go-round babysits the young. The teen scene is split among the dark, electro-pulsing video game arcade, a noisy, boisterous go-kart track lined with stacked tires, and one of those green-carpeted, dreary putt-putt golf courses where boys pray for the chance to show their dates proper putting form. And, at age 64, I’m praying for the visual excitement of any old windmill with its blades still turning.

I don’t remember seeing one.

George is tired. I am tired. He has my mug in front of a curio shop called Marsh’s Free Museum, a local landmark where all the toys inside are placed at knee height so kids can easily claim them, while outside, adults can buy a “life-size” carved wooden Bigfoot for about 2,000 bucks.

George takes a shot of me next to the Sasquatch and we both call it a day. We need to find our motel. We can both use a nap before shooting the lighthouse.

George stays in the car while I check out the rooms at a frumpy, threadbare establishment called Seaview Cottages. Honestly, no sea, no view. I overpay for a two-bedroom cottage and take the room in the back, which has a sliding door.

We nap almost instantly. When I wake, I see my door has been shut for me. I come into the kitchen and George’s face says it all: he has heard the hound of hell and now knows I wasn’t kidding. But he makes a good joke about having heard worse––he is the only man on the planet, other than the karaoke spinner, to survive seven minutes of me mangling the Doors’ “L.A. Woman” at a bar in Lake Nahwatzel.

We leave for the lighthouse shoot, still groggy from the carb overloading at breakfast.

Returning to the Cape

This isn’t my first trip to Cape Disappointment.

In early spring two years ago, I had just finished a long, arduous book on Olympic Mountain waterfalls, pulling together directions, notes, and old articles from years before, and rewriting day and night to meet my self-imposed deadline. It nearly killed me, not in the least for putting my wife, all my relationships, and other interests on hold.

On the morning I was to hand over the entire file for printing, it was gone. The folder containing more than 60 documents––all my chapter files––was nowhere on my desktop and nowhere in any other folder. All gone, gone, gone.

I searched, nearly blind and shaking from a panic attack. I went from shock to tearful disbelief, to numbness, and then to an angry rage, finally grabbing my wallet and keys, running out of the house, leaving Linda in the driveway as I sped away.

Well, I got there, all right, but I turned off the engine and stared at the sea. I couldn’t go through with it. But I still felt anger at the gods for their cruel betrayal. I did a bunch of things that night of which I’m not proud including my downing of six vodka tonics in the company of strangers in an Astoria bar.

I wanted to go back to the Cape to celebrate the fact I was better now. I’d gotten my book published; in fact, it had been Linda who texted “FOUND THEM” to me in Astoria.

Then, two days before my road trip the oddest thing happened. Linda and I had a long night’s talk by a crackling fire in our backyard. She’s been processing sad, dysfunctional family stuff ever since I’ve known her, classic 1950s male dominance dynamics that, basically, come down to a father who thought it best if all women, especially his wife and three daughters, just kept their mouths shut, thank you very much.

“He wrote me off,” Linda said. She was the oldest child and absorbed the brunt of her parents’ mistakes. “I’ve never been heard,” she continued, “even by you, Mark. You want to dismiss what I have to say sometimes. You think you already know. But I haven’t even begun to tell you. I’ve been fighting my whole life to be heard, to be counted, to be valued as an equal. Damn, you’re supposed to be my best friend. But you won’t take the time to hear me.”

“Good clouds shaping in the West,” George says, as we pull into the parking lot at Waikiki Beach, Cape Disappointment State Park’s gorgeous, postcard of a swimming destination. There’s plenty of daylight to shoot multiple scenes.

I grab some gear but remain distracted by thoughts on the future. A man our age is rooting in the back of his gray van parked nearby, opening and eating from a tin of sardines. He smiles and salutes the brim of his hat.

He glides over and introduces himself as David, from Ohio, now six weeks into a solo road trip, ostensibly to visit his daughter in San Francisco. David is pleasant, speaks well, and I enjoy the distraction and camaraderie of a fellow Buckeye with an interest in mushrooms.

I invite him to follow along. He continues his story of why he’s on this trip, and now admits he failed to see his child, being put off by her twice.

“I came all this way to see my girl,” he says. “I tell you it nearly killed me. I was so disappointed, and you aren’t going to believe this, but I looked at the map that night and saw ‘Cape Disappointment’ up the coast, and something about the name and how I felt, well, I just knew I needed to come here.”

If misery hasn’t found company, I don’t know what else to make of this, I think, feeling suddenly lighter.

“I came here the first time under similar circumstances,” I say. “This time I’m thinking I might write about it, you know, to help process the whole thing.”

I mention my part-time gig as a newspaper columnist.

“Here, let me get your email address,” David says, giving me a pen and pulling a bookmark out of his mushroom guide. It’s a blue square piece of paper with a logo design featuring the DaVinci “Vitruvian Man” beside two words joined together: “FearlessFalling.”

“This is really rich,” I say. “These two words describe what I’m going through right now, working out stuff with my wife.”

“Oh, it’s a course in how to fall properly taught by a guy in Columbus, Ohio,” David says. “He teaches seniors how not to break their hips.”

Fearless Falling is the official slogan for my road trip as the leader of the Cape Disappointment Survivors Club. Now there’s a name that sticks.

Mark Woytowich is a writer, photographer, video producer, and author of Where Waterfalls and Wild Things Are. He lives in Potlatch, Wash., with his wife. His “On the Trail” outdoors column appears every other week in the Mason County-Shelton Journal.