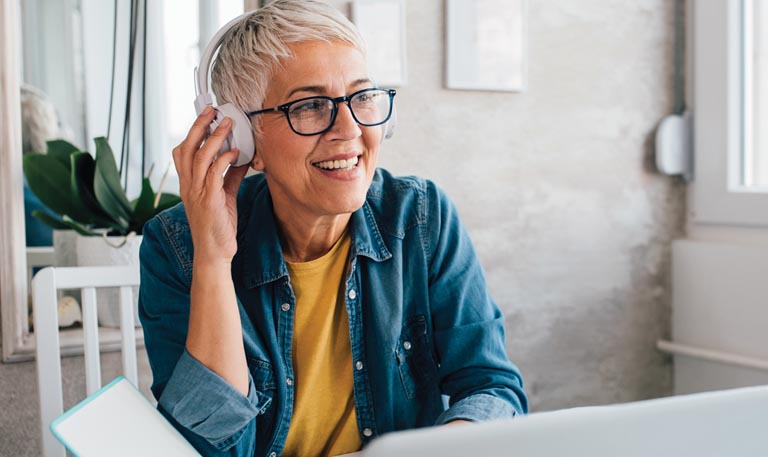 I was seven when the first black and white television appeared at our house. Until then radio was our only source of media entertainment providing a steady diet of Art Linkletter’s People Are Funny, Hallmark Hall of Fame anthologies and Roy Rogers crooning “Tumbling Tumbleweeds” from the living room wooden console. TV was a miracle, even on a small screen in gradations of black and white. So, when friends began talking up their favorite podcasts, I was unconvinced. Why would we, the generation who witnessed the audio-to-visual transition, want to reverse course?

According to Nielsen, the analytics company known for its television ratings, 50 percent of all homes have at least one person who’s a podcast listener, a number increasing annually by 20 percent. Since 2014, boomers have increased our podcast fandom by nearly 70 percent because new technology such as voice-activation and Bluetooth in our homes and cars make podcast programs easier to find and hear. Last year the uptick was more pronounced across all demographics as many of us, isolated and homebound, turned to podcasts for information and entertainment. Skeptic that I was, it took a pandemic to convert me. Now, I’m hooked.

Convenience and variety were the convincing draws. Like streaming TV, you can listen to a podcast program anytime on your smartphone or computer. I listen when walking, driving, and doing mundane household tasks. I enjoy the original programming content produced by the host(s), often without the restrictions of the FCC or conventions of radio broadcasting. Programs can be any length of varying frequency covering any topic. Some feature only the host(s)—think of it as a one-way conversation with your likeable, but opinionated, neighbor. Others utilize outside guests—Dr. Anthony Fauci was a podcast regular in 2020. Many celebrities host their own podcasts, including Alan Alda, Ozzy and Sharon Osbourne, Alec Baldwin, RuPaul, Shaquille O’Neal, and Martina Navratilova. And many are produced as a themed series such as targeted to women over 50, true crime, and history.

If you’re a first-time listener, start by selecting a podcast listening application. iPhones have a free built-in app (Apple Podcasts) that lets you browse topics by category and stream or download programs. Android phones come with a similar built-in app or you can download through Google Play. If you subscribe to Amazon’s Audible for audiobooks or Spotify or Pandora for music, they also feature podcasts. Or you can simply use your browser to search for topics. With more than two million podcasts and 48 million episodes available, the programming choices are overwhelming, but you’ll eventually find yourself gravitating to topics or hosts that you like. When you find one, subscribe to get the latest episode or episodes in a series.

Still unconvinced? Studies show the brain is five times more active when listening to an audio program versus watching television. Listening requires more concentration and use of the imagination, which in turn strengthens brain synapses. Improving your brain health while getting bidet advice at your convenience? That sounds like a winning combination.

Here are a few programs and hosts that explore aging:

Aging Disgracefully with Carolyn Meyer: Meyer is a an 80-year-old comedian by trade and as the solo host of her podcast she unabashedly dishes out her experienced advice on everything including the aforementioned bidets, dating younger men, sex ed classes, and buying underwear.

Been There Done That: Jo Ann Allen, a former news anchor and producer with a 40-year career curates a podcast showcasing real life stories by boomers. Recent podcasts include accounts about accidentally joining the Mob and late-in-life transitioning from male to female.

That’s Not My Age: Billed as a grown-up’s guide to aging, British journalist Alyson Walsh discusses aging, style, and third act careers with a variety of special guests.

This American Life: Ira Glass, an NPR staple, transformed his popular series into a Top 10 podcast with 2.4 million people downloading each episode. There are 25 years of episodes in his library.

Your Last Meal: In this James Beard-nominated podcast, Seattle radio personality Rachel Belle asks famous guests what they’d want at their last meal, then explores the science, history, and preparation behind their answers. It’s no surprise to learn that Ben Cohen and Jerry Greenfield of Ben & Jerry fame want fruit and a dessert bar.

Zestful Aging: Featuring New York psychotherapist Nichole Christina and more than 237 available episodes. Christina interviews a variety of experts on healthy aging and as a bonus she also dishes out DIY advice about podcasting.