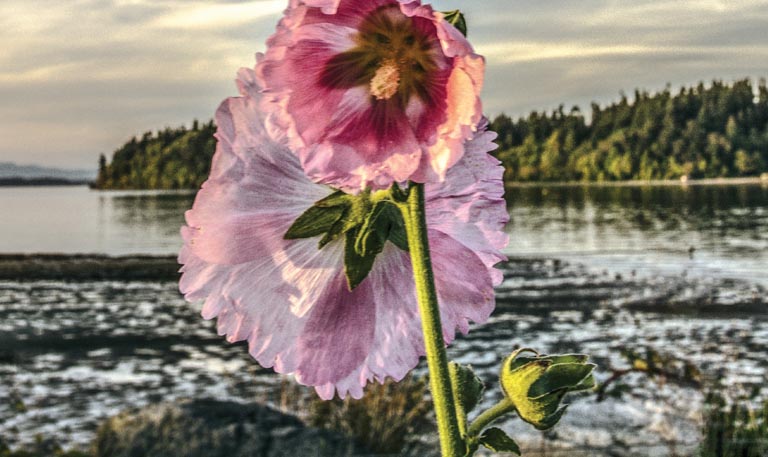 One of my retired friends loves to sit and look out his west-facing windows from the once-rural house where his wife grew up. The view includes Puget Sound and his wife’s garden and a grove of 300-year-old western red cedars. Sometimes hours pass before he moves. Maybe this peaceful habit is a form of meditation. They are avid hikers, so I think he is also enjoying his love of nature.

Once a high-powered corporate director of strategic education, HP (as we call him) decided to retire early when my husband—his friend—died at 56 from brain cancer. When he announced his decision, HP was offered consulting work but decided it wasn’t for him. Hardly the Zen type, HP had been a college football player and has two bad shoulders to prove it. He survived Vietnam and he feels a deep gratitude for whatever time remains.

When we first talked about his days, I was starting to think about retirement but with no thoughts of sitting around, with or without a scenic window. When you spend your life moving fast, believing it is somehow essential to your survival—working, parenting, socializing, volunteering, maintaining a home, car, whatever—it can be hard to slow down. Many of us are driven by the great motivator: anxiety. It doesn’t matter what makes us anxious. Childhood, love, money, identity—it is a powerful force.

I once wondered, at what age and level of security does anxiety fade? Experience makes us more confident that we know what to do to solve problems, what needs to be done and what does not. Priorities become clear, love and friendships stabilize, we know who we are and who we don’t want to be. After witnessing the death of people close to us, we make peace with mortality. We stop wanting more.

I’ve been lucky. My work allowed me to see enough of the world and try as many adventures as I cared to. Now I want to stay home. I had spent a lifetime trying to understand how cultural beliefs and psychological experiences alter perception—and those questions once drove me, even after retirement at 70, to continue long hours of working. I started two books, did years of research, my library ankle-deep in books, articles, notes, and manuscripts. Yet, when I was more or less finished with a book, I found I had little desire to publish it. Too much effort.

I thought it was a lack of confidence and, in part, it was. I began to feel I was lazy, confused, dogged by my old hardworking habits and the flashing sign, “Were you productive today?” My natural intensity turned against me. I became depressed. I forgot the usual stages of any major life transition: seeing the window of opportunity, gathering information, wavering, making your move, feeling scared, completing the move, and then feeling relief as you see what is ahead. Think of it as passing a car on a two-lane road with only so much vision of what is in the passing lane. You find yourself gripping the wheel.

It took two years to realize I had answered enough of my own questions to let this particular writing passion pass. It was harder for me to let go of the demon of productivity than to accept my mortality. Coffee in bed, looking out the window, sauntering instead of fast walking went against every fiber of my being. Until it didn’t. Slowly, I calmed down. Health played a part, but the acceptance of new pleasures was paramount.

What do you gain by slowing down to the point of savoring a day? What happens when you never rush anywhere? It becomes OK to take naps, wear pajamas for quiet mornings, cuddle dogs, hang out with friends for movie night, watch silly and sweet things online. Yes, it’s a shift in identity. I had to coach my friends to stop asking about my writing.

I recently found a fitting quote from writer Deborah Eisenberg in The New York Times Magazine:

“People always talk about how horrible old age is, but I couldn’t disagree more. I find age is as intense as adolescence. You know you could hurtle off a cliff at any second. You feel I’ve survived this ordeal, and now I don’t have to worry. I know how my life has worked out. All the anxiety that I put into the hard questions has fallen away. I can take my satisfactions where they are. I can enjoy my supper.”

I know enough about how my life—with its many twists, turns, ups, and downs—has worked out. I am content.

A few weeks ago I was at a party with HP. He gave me his usual big hug. He knew I, too, had learned to put the battles behind me and look out the window. He was dressed as a cowboy, I as a monarch butterfly. I won the best socks competition. He awarded me the prize, a six-pack of beer with almost pornographic labels, he had gotten from Scott (who had come dressed as Brett Kavanaugh). I gave a can to whoever would take one, and I laughed all the way home.