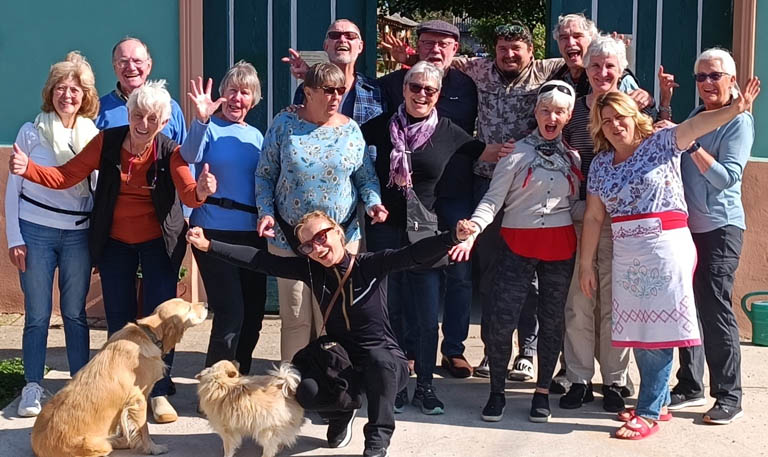 Visiting Sarajevo is a visceral experience. Being there brings both the horrors of war and the resilience and optimism of the people who survived it into crystal clear focus. Sarajevo is a modern-day testament to how manufactured political and religious divisiveness, fear mongering, and nationalism can tear a country and people apart, turn once friendly neighbors into murderous foes, and how no one, no one, wins in these conflicts.

History has tried to teach us this lesson time and time again. Yet, time and time again we refuse to heed its warning. We think we’re right, that God is on our side (never others’), and that what happened in Germany, or the Balkans, or Syria could never happen here.

But it did happen here. America’s own bloody civil war ended just 167 years ago. And there is fear it could happen again.

Any talk of a civil war means we have lost perspective and are naïve to the horror it would bring. As the leading world and economic power for most of the last century, Americans enjoy one of the highest, most comfortable, secure, and privileged lifestyles in the world. Our politicians would have us believe otherwise, sowing discord and distrust among us. We arm ourselves against each other in response, we demonize “out” groups or those different from ourselves, we fear social media-fabricated boogeymen, and we commit crimes while telling ourselves it’s all for love of God and country. We are right and righteous.

How do we get the perspective we need to avoid conflict? Travel. When we look back at America from another country, we learn a lot about our own home, and it can change our perspective. If more people were able to travel, I believe our politics would look very different, and fewer people would be motivated by fear of “other.”

David and I recently traveled through the Balkans with a small group of 10 friends, old and new, on a 3rd Act Magazine adventure lead by Overseas Adventure Travel. The 18-day “Crossroads of the Adriatic” trip took us through Croatia, Bosnia-Herzegovina, Montenegro, and Slovenia, all once part of former Yugoslavia. The trip was everything we hoped it would be and more. Dubrovnik and the Adriatic Sea are spectacular. The natural beauty of the surrounding countryside is breathtaking. The food is interesting and delicious, and the warmth, good humor, and resilience of the local people we met was absolutely inspiring.

It’s amazing to see castles and fortresses in real life. Dubrovnik was home to the Game of Thrones filming for seven years! Fantasy can be a nice escape, but to touch real history, to walk actual fortress walls and think about the people who built and defended them is mesmerizing and makes history accessible.

Dubrovnik was not spared in the Balkans war of the early 90s. Much of the historic walled city was bombed but continues to be lovingly restored with the help of UNESCO. We met with a woman there who was just age 6 when the war broke out. She shared her moving story of what it was like—of terror, a lost childhood, and of her father who was killed trying to defend Dubrovnik. Horrors that people and children in Ukraine are experiencing now as you read this.

In Bosnia-Herzegovina east truly meets west. The Ottoman Empire ruled this region for more than 400 years until 1908, when Bosnia-Herzegovina officially became part of Austria-Hungry. There is a street in downtown Sarajevo where the words, “Where East meets West” are embedded in the pavement. If you walk one direction you are surrounded by Byzantine architecture, shops, Turkish coffee houses, and mosques. Walk in the opposite direction and Habsburg Neo-Gothic and Neo-Renaissance architecture takes prominence. In either direction, here and there on the pavement, we come upon “Sarajevo Roses,” unrepaired, red paint-filled damaged sections of sidewalks and roads where mortar shells fell and killed three or more people. There are numerous unrepaired buildings, too, riddled with bullet holes and blast damage. Twenty-six years after its end, the scars of war are everywhere. But the biggest scars are the ones you can’t see, the ones carried within the people.

In Sarajevo we met with a veteran of the 90s conflict who shared his story. He lost an eye, friends, and family members, and has severe PTSD from the war. He spoke softly and hauntingly, and swore that they’d learned their lesson and war would never happen there again. But others we talked with are not so sure. Serbian separatists in Bosnia have lately renewed succession threats. There were European Union peace-keeping forces in our hotel. It seems the virus may only be lying dormant.

At one point, after expressing my sorrow over what they’d lived through, I was gently berated by a local guide who’d also lived through the war. “Don’t focus on the war, it’s past,” she said, “focus on our resilience! Focus on this beautiful sunshine today. Focus on the future. Life is good!” Her sentiment was caught on a sweatshirt I saw hanging in a shop window. “Sarajevo,” it read, “no bad days since 1995.”

From Sarajevo we head north and east back into Croatia to Karanc, a village close to the Hungarian border where we stay at a small farmstead you won’t find in any travel guides. It was a wonderful respite, and the third-generation owner who referred to himself as “Dennis the Menace” was a devilish delight. His wife Goca was especially warm and wonderful. We made fresh cheese, helped prepare earthenware-cooked goulash on an open fire—OMG, delicious! —and were welcomed into the homes of neighbors for a delectable homemade dinner.

Throughout our trip we enjoyed homemade wine and fruit brandy, most pretty good, which was always accompanied by the enthusiastic toast, “ZIVJELI!” (pronounced, ji-vo-LEE), which means “to life!”

Unlike Sarajevo, Zagreb, the capital of Croatia, was mostly spared during the war. But on March 22, 2020, as the whole world was locking down under COVID-19, Zagreb was hit with a powerful magnitude 5.3 earthquake with an epicenter just 4.3 miles north of the city center. Then, on December 29, 2020, central Croatia was hit with a Magnitude 6.4 earthquake. Buildings built in the 18th and 19th centuries were hardest hit, and repairs have been hampered by the pandemic. Still, we found the city to be beautiful, stylish, and vibrant, with a fascinating history and full of quirky museums like the Museum of Broken Relationships.

A café culture, tables line Zagreb’s old town streets where locals meet for coffee, wine, or beer—regardless of the time of day—to gossip and watch and critique the fashion parade. At dinner one night we were serenaded by a woman singing from a second story window across from the café. Softly backlit, beautifully singing Qué será, será and other songs we knew, it felt like we were sitting on a movie set. But this was real life. This is being alive.

Back to the coast we explored fortified hilltop villages including Hum, which bills itself as the smallest fortified town in Europe. True or not, I don’t know, but it was a small gem.

The real gem of our trip, however, was Ljubljana (pronounced lyoob-lyee-AH-nah). Ljubljana, the capital of Slovenia, is as worth seeing as Paris or Vienna. It’s beautiful, walkable, and vibrant, with a little bit of an Amsterdam feel and a fraction of the tourists. Virtually untouched by the recent war, there is a lightness here. A large section of the city center is pedestrian only, and families, students, and fashionistas spend their afternoons and evenings walking, biking, dining at cafes, and socializing. Slovenians are not home in the evening watching TV. In fact, while we were surrounded by the most delectable breads, pastries, and deserts imaginable—all readily consumed by the locals—no one was overweight! (Except the tourists.)

Crossroads of the Adriatic, indeed. There’s so much to see and learn here, so much they can teach us. In the end what we heard over and over is not to sweat the small stuff, and that compared to war, it’s all small stuff.

We are at a crossroads right now in our own country. I pray that we do not have to learn lessons the hard way. I pray for Sarajevo. I pray for us.

Victoria Starr Marshall is the Publisher and Editor of 3rd Act Magazine.