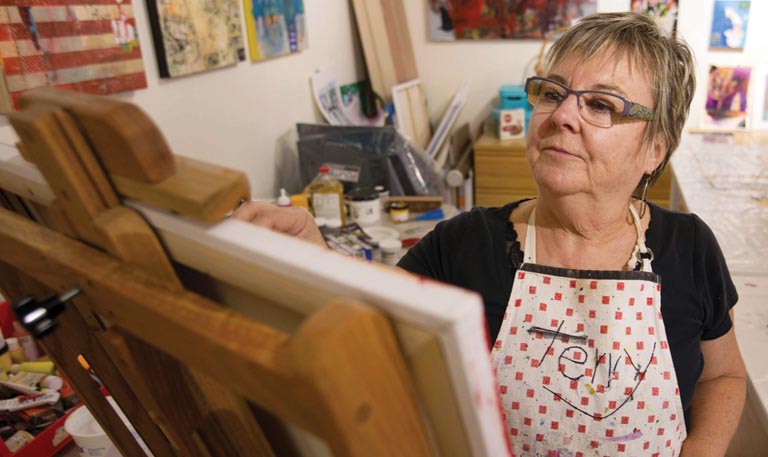 Tucked into a corner of Seattle’s trendy Georgetown neighborhood is a special haven for artists and art-lovers: Fogue Studios & Gallery.

You’ll find it up a flight of stairs in the Georgetown Building, a venerable brick structure on Airport Way South that also houses a pizza parlor and a vintage furnishings store.

Entering the place is like walking into an art trove of a fanciful, diverse collector. It seems like every square inch of this compact space, the narrow hallways as well as the double-walled main area of the gallery, is adorned with vivid artworks in many styles—from the pastel “kinetic flow” paintings of Jyl Blackwell, to the captivating you-can’t-believe-they’re-recycled-paper sculptures by Heather Saddler, to David Shettleroe’s vibrant abstract oil and acrylic paintings, which shimmer with blended accents of copper and warm glass.

The media may be mixed, but there’s one thing the artists share in common. All are members of Fogue, a new cooperative artspace devoted to the work of accomplished “creatives” over age 50.

Fogue (the name is a chic play on “fogey”) is the unique brainchild of Patti Curtis Hair, whose own bold sculptures incorporating the gleaming silver shapes of antlers and animal skulls are also on view. Curtis Hair is a woman on a mission. She came up with the concept of an exhibit and studio co-op featuring the work of older artists as a way of combating age discrimination in her own life.

A forthright woman who dresses with panache and radiates confidence, she lost her executive job as a product designer when the cosmetic company she worked for in California “let everyone over 50 go.” When the search for a new job nearby was fruitless, she headed back to the Seattle region (she’s a local native), hopeful to find a post in the city’s booming economy. But despite 25 years of experience in her field, and a diligent employment search, “I couldn’t even get an interview,” she says. She suggests wryly that many of Seattle’s hottest companies are run by “millennials don’t want to report to their mom—or be accountable to her!”

At 53, Curtis Hair didn’t “have enough money to do nothing. I had to work.” So this Cornish College of the Arts grad decided to take a leap into the unknown: Why not go back to her first love—making art? And why not help other worthy artists over 50 get a showcase for their work too?

“I started meeting mostly with older women who are changing careers,” she explains. “Many of us have, with age, acquired the wisdom and experience to put some of the best artwork out there.  But we face a lot of sexism and ageism.”

To cast the net wide, Curtis Hair attended events at galleries and approached artists she didn’t know. “I’d say, ‘I have a weird question to ask: Are you over 50?’ And I found that people were really receptive to my idea of starting a collective. I began to find like-minded travelers to join in.”

She also found a helpful supporter in John Bennett. A preservation-oriented Seattle real estate developer, Bennett has been investing in the rejuvenation of Georgetown since 1996. He has renovated numerous buildings with the goal of bringing back to life the neighborhood’s original business corridor, with a fresh artsy/industrial ambience.

When Bennett offered to rent the second floor of his Georgetown Building at very reasonable rates, Curtis Hair jumped at it. At that point she knew a dozen or so artists interested in participating in a new co-op arrangement.

One was Terry Smith, a Sammamish resident so eager to find a studio space that she now happily commutes to Georgetown to paint and teach workshops. “I’d been looking for something on the Eastside for two years and couldn’t find anything affordable,” she explains. Yet when first shown the future home of Fogue, Smith wondered, “What the heck are we getting ourselves into?’

“It was pretty dingy when we got it, and the lighting was very bad,” Curtis Hair acknowledges. “But about 80 percent of the people who came to look said, yes, let’s do it.”

Today the membership has nearly doubled.  Each artist pays a fee that helps support the gallery and guarantees a certain amount of space for displaying their work. Fogue will sell pieces for a commission that’s considerably less than charged by most commercial galleries. (“I’m passionate about keeping the money in the artist’s pocket,” Curtis Hair emphasizes.) To keep the displays dynamic, members rotate their artwork every two months, and each has a dedicated page on the collective’s website (foguestudios.com) to post art samples and a biography.

Fogue is open to the public four days a week. More foot traffic comes from its participation in the Georgetown Art Attack, a monthly celebration of gallery openings, studio demonstrations, music, and food held every second Saturday evening.

Curtis Hair hopes to recruit more writer and musician members, and will offer poetry readings, concerts, and other events. When interviewing potential members she looks for a portfolio of excellent, professional-quality work, but also a willingness to be part of a community dedicated to sharing skills and ideas, not just square footage.

“We all are learning from each other,” notes Terry Smith. “Among us we have so much deep experience to share, in so many different fields.”

In 2019, Curtis Hair hopes to expand Fogue by taking over another portion of the building. Now a nonprofit organization, Fogue will also begin seeking funding to develop the space and its programs.

But most of all, Curtis Hair wants to replace the image of “a bunch of old fogeys rocking our chairs” with more respect for mature creativity. “Our task is to challenge the paradigm of what aging looks like,” she says. “It doesn’t mean you’re incapable of being cool and creative. We’re saying, as older artists, we’re loud and proud—and very visible.”