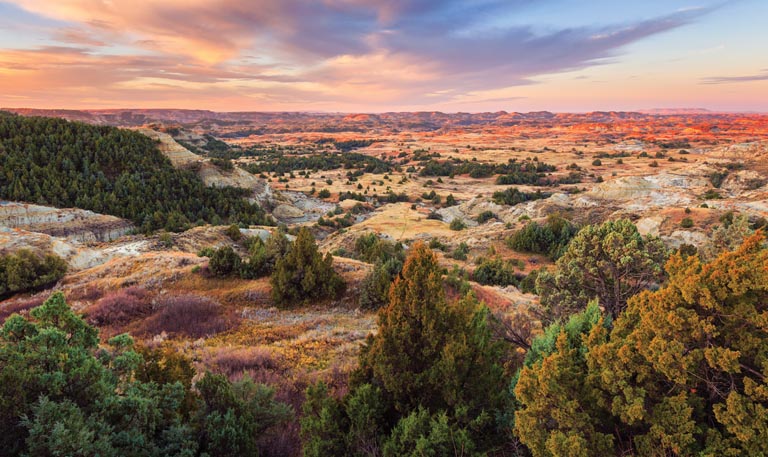 Wallace Stegner once said that America’s national parks are “the best idea we ever had,” and they often feel like our own big, extended backyard. I remember waking up one morning in Rocky Mountain National Park—where it had been raining for days—and impulsively driving to Utah, where I was happily hiking in Arches National Park by evening.

Becky Lomax, author of the newly released Moon USA National Parks book, grew up visiting Mount Rainier National Park and lives now in Whitefish, MT. She recalls a time she and a friend were in Glacier National Park, camping near a basin with two good-sized glaciers when the full moon rose. “Those glaciers just lit up,” she says, and the glittering spectacle continued as the moon moved across the sky. When the moon set, the Northern lights came out, capping a truly unforgettable night.

But will we still have glaciers to marvel at 20 years from now? Although the National Park Service has been around for more than a century, these ancient landscapes feel more fragile than ever. Climate havoc is one challenge, and the recent government shutdown meant added damage to sensitive parklands (along with big revenue losses). 3rd Act asked park experts what we can do to help preserve our national parks legacy—and we also sought tips on less-crowded parks to explore.

“It starts with the government,” says Kurt Repanshek, founder of the National Parks Traveler website, but lately, both the parks and their employees have been disrespected by officials in Washington, DC. Make sure elected officials know you value the parks and want to see them protected.

We individuals bear responsibility, too, and Lomax says we can better minimize the workload we put on park staff. Take a reusable water bottle (because recycling requires human and natural resources) and pack a bag to stash garbage when you hike—yep, even scraps of toilet paper and apple cores. If something doesn’t grow in the place you’re visiting, it ought to be packed out.

“Grandparents have such an opportunity to teach their grandchildren ‘leave no trace’ responsibility,” Lomax notes. Consider visiting parks in slow seasons to have a less-crowded experience. Repanshek adds that spreading out visitation can help lessen the need for new roads, parking lots, and lodges.

Parks to put on your radar

With far smaller crowds than Mount Rainier and Olympic, North Cascades National Park offers experiences both handy (along U.S. Highway 20) and remote. Lomax suggests taking the Lady of the Lake boat from Chelan to Stehekin, where you can camp or sleep in comfort at North Cascades Lodge.

Both Repanshek and Lomax recommend Lassen Volcanic National Park in California for its near-Yellowstone-like thermal features and a trail to the top of dormant Lassen Peak, which last erupted in 1917. From Lassen, it’s easy to pick up Crater Lake National Park in Oregon on the way back to Washington.

And both also like Theodore Roosevelt National Park in North Dakota for beautiful badlands scenery and abundant wildlife. “It’s where Theodore Roosevelt found his conservation genes,” says Repanshek, who has just finished writing a book about the restoration of bison to the American West. Repanshek also recommends Wind Cave National Park in South Dakota for fascinating geology, bison viewing, and Lakota heritage. “It’s that whole blend of natural and cultural resources, and it has one of the best campgrounds I’ve seen in the country,” he adds.

In addition to the 60 national parks, the system includes hundreds of other units ranging from national historic sites (like the downtown Seattle unit of the Klondike Gold Rush National Historical Park) to national monuments. In the latter category, Repanshek recommends Dinosaur National Monument, “which really is national park quality,” with wild rivers and incredible landscapes on the Wyoming-Utah border.

Only about a quarter of the more than 400 park units charge for admission, and they’ll be free on four more days in 2019: April 20 (the first day of National Park Week); Aug. 25 (the park service’s anniversary); Sept. 28 (National Public Lands Day); and Nov. 11(Veterans Day). The parks are a bargain year-round for people who hold an $80 annual pass (all ages) or the Senior Pass (an $80 lifetime pass for ages 62 and up). Get details on all the parks and passes at nps.gov.

Julie Fanselow lives in Seattle. Her books include Traveling the Lewis and Clark Trail and Idaho Off the Beaten Path. Read more from her at surelyjoy.blogspot.com.