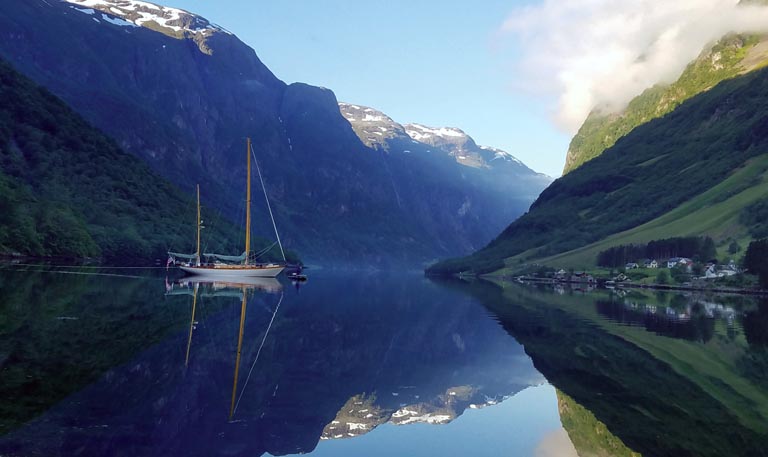 The ‘Paddle Pilgrim’ seeks his people on a journey to Norway

These days, the President of the U.S. says he’d rather have more emigrants from Norway than what he disparaged as “s___-hole” countries. It wasn’t always this way, however. My Scandinavian ancestors immigrated to the United States in the mid-19th century and were commonly called “Dumb Norwegians,” giving rise to a vast and vacuous genre of Ole and Lena jokes. Rather than the darkness of their skin, they were denigrated for the whiteness of their hair. How times have changed, with the Scandinavian countries frequently praised today as the happiest places on earth.

Last summer, I traveled to kayak my ancestral fjords in Norway on a quest to find out more about my people and my ancestral inheritance. I wanted to know why they left their homes and what they left behind.

I discovered that they left their homes because of poverty, poor soil, and religious intolerance. They didn’t want to leave their magnificent fjord farms, but better health and growing family sizes left all but the oldest son—and women until they married—landless and poor. The American Dream with its lure of flat, fertile, and free land tore them away from home. Between 1845 and 1915, more than a third of Norway’s population and over half of Ireland’s came to America. I guess those dumb Norwegians were pretty smart after all.

Having traveled in Norway before, I knew of its rugged and fierce beauty, but paddling the “holy waters” of my ancestors taught me lessons about the values of my people that endure to this day.  Locals call it “friluftstliv,” or fresh-air-life. It is embodied by a nation which celebrates the environment year-round by skiing, hiking, paddling, and fishing. Caring for creation isn’t a new concept. It’s as Norwegian as lefse and cross-country skiing. No doubt the benefits of the oil industry have raised the standard of living for all, but renewable energy sources (wind, solar, geothermal, hydro) are seen everywhere. My Leaf electric car is still uncommon here in America, but in Norway over half the cars are electric.

Progressive politics is another hallmark of Norway. The Scandinavian countries have long been leaders inhospitable immigration policies. While paddling, I met people from all over the world who had come to this place which celebrates diversity and welcomes the stranger. America is a nation of emigrants, but we need to be reminded of what emigrants have long brought to our land.

Many students I’ve taught were from other countries and the first in their families to embark on the journey of higher education. I can bear witness to the fact that these “dreamers” were often the hardest working, generous, and appreciative students.

Long ago, my own ancestors were dreamers who came to this land of opportunity. Their hard work, deep faith, and creativity helped shape the land of the free and the home of the brave. Like today’s newcomers, they heard the words of the poet Emma Lazarus, as inscribed on the Statue of Liberty:

“Give me your tired, your poor,

The wretched refuse of your teeming shore.

Send these, the homeless, tempest-tost to me,

I lift my lamp beside the golden door!”

My adventure to my home in Norway was a wonderful reminder of the wisdom of the great America poet Robert Frost: “Home is the place where, when you have to go there, they have to take you in.”

Perhaps the greatest lesson I learned on my paddle pilgrimage is that sometimes you need to go on a journey to find your home.

Dave Ellingson is no stranger to journeys of discovery. He has paddled 2,300 miles down the Mississippi River, 500 miles down the Erie Canal and Hudson River to the Statue of Liberty, and now the fjords of Norway.  He has taught courses in spirituality, environmental ethics, human development, and youth ministry at Trinity Lutheran College in Everett. He is a Lutheran pastor, master gardener, former distance runner, and father of five grown children. He lives in Edmonds, WA.