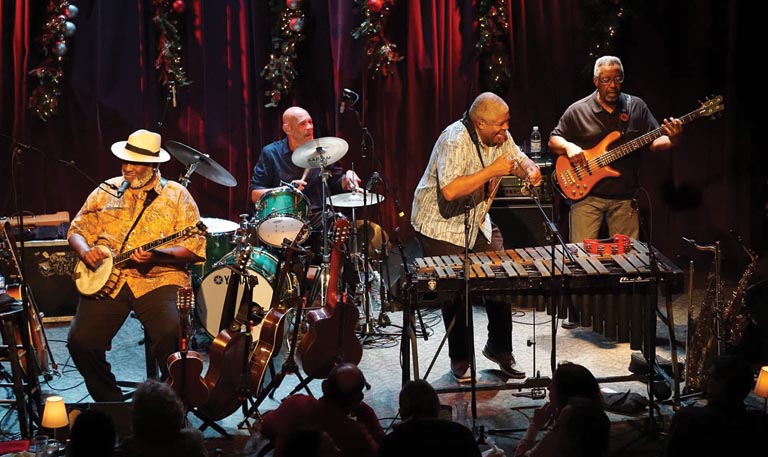 One thing I’ve always loved about classic American films from the 1940s and 1950s, the ones about swanky swells, is how a big night out on the town means dressing sharp and heading to a sleek nightclub for cocktails, dinner, and great music.

Most of those films were shot on sets built on Hollywood sound stages. But they were inspired by real, sophisticated nightspots. Think the fabled Stork Club in New York. The Chez Paree in Chicago. The plush Venetian Room in San Francisco’s Fairmont Hotel.

Seattle may not have anything quite so grand these days where you can spot movie stars dripping with minks and bigwigs duded up in tuxes. But while the dress code and patrons are now more diverse, I can recommend some fine contemporary and attractive local supper clubs that cater to adults enjoying a good meal and an array of eclectic music that won’t punish your eardrums.

Here are some top picks:

Dimitriou’s Jazz Alley. One of the premier nightclubs in the nation, this comfy downtown spot has presented giants of jazz for decades and has branched out into other styles of music as well, bringing in nationally acclaimed soul, Latin, and pop acts. Musicians and patrons alike love the chill atmosphere and respectful audience, the intimacy, and good food (continental, with a light New Orleans tilt).

Host and owner John Dimitriou knows how to maintain an informal but classy vibe, and it’s all in the family: His son Charles Aristotle (“Ari”) Dimitriou manages the bar and large party reservations to keep the Alley humming.

If you sign up to be an “Alley Cat,” the club will send you priority booking notes and opportunities for discount tickets. Another plus: all patrons have access to free parking at a nearby hotel.

The Royal Room. This festive, casual bistro is a mainstay of the Columbia City neighborhood. The kitchen serves up Mexican-style eats. There’s a full bar and—lo and behold!—a dance floor in case you get a case of happy feet.

Spearheaded by noted Seattle keyboardist-composer and recording artist Wayne Horvitz as a kind of a community “corner bar” with great sounds, the club offers an assortment of music seven days a week and caters to all ages until 10 p.m. (Closing time for the over-21 crowd is 2 a.m.)  The lineup emphasizes both local and national acts, ranging from a “Great Women of Country” tribute series to appearances by the area’s swinging and award-winning local high school jazz bands, to concerts by Horvitz and company. It also hosts benefits for good neighborhood causes.

The Triple Door. When Wild Ginger, the popular pan-Asian Pioneer Square restaurant, relocated to its present downtown location near Benaroya Hall, the owners did music-lovers another favor. They revamped a former movie theater into the Triple Door, an excellent music venue featuring local and big-name artists.

Audience members, mostly sitting in spacious booths, have the option to order dinner from a menu of select Wild Ginger dishes or just stick with the cocktail and munchies menu. Arranged in tiers, the seating has excellent sight lines to fully experience sets from a wide-ranging musical menu that includes modern jazz, gypsy jazz, salsa, light rock, and neo-burlesque shows.

Tula’s. As Belltown has been rezoned and gentrified with canyons of skyscraping apartment complexes earmarked for young techies, this beloved club has managed to hold its ground—and inspire others working to preserve it as a cultural landmark. It certainly deserves the designation. Occupying an older building on bustling 2nd Avenue for the past two decades, the place harkens back to older jazz hubs and was listed by jazz superstar Wynton Marsalis as a “cool” place and one of his top 10 favorite clubs.

Offering music six nights a week, and a full dinner menu focusing on Greek and Italian fare, Tula’s has been a showcase for many hot local jazz artists and welcomes top student bands also. It’s got a funky grandeur that will put you in the right zone.

Bake’s Place. A stylish Bellevue boîte, this club keeps the emphasis on a wealth of local talent performing blues, acoustic rock, soul, and jazz. The menu is a potpourri, too, with an emphasis on Northwest bounty and a choice of snacks, small plates, and entrees, as well as a large wine list and craft cocktails. There is on-site parking.