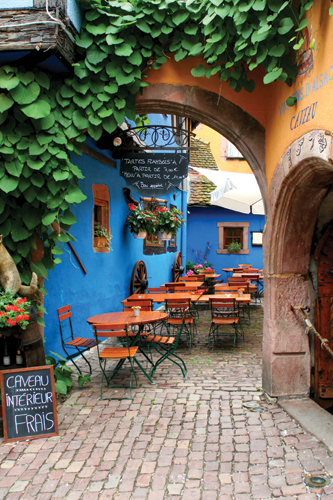 After graduating from high school, I took my first trip to Europe without my parents or much money. I subsisted entirely on jam, baguettes, and Fanta. When I returned home, my doctor declared me “chronically undernourished”. I’ve never had a jam sandwich or Fanta since.

In fact, one of my biggest passions these days is to find great restaurants in Europe. Whether it’s Wiener schnitzel in Vienna, salade nioise in Nice, or wurst in Wrzburg, a country’s high cuisine is as culturally important as its museums. Just as there are tricks for sightseeing though, there are also ways to maximize your culinary experience.

To find a good restaurant, ask your hotel receptionist, or head away from the tourist center and stroll around until you find a place with a happy crowd of locals. I look for menus (usually posted outside), handwritten in the native language, and offering a small selection. This means they’re cooking what was fresh in the market that morning for loyal, return customers. If no menu is posted, ask to see one. Be aware that the word “menu” can mean a fixed-price meal, particularly in France and Italy. What we call the menu in the US usually goes by some variation on the word “card” in Europe for instance, “la carte” in French, “Speisekarte” in German, and so on.

Many small eateries offer an economical “menu of the day” (known as “menu del dia” in Spain, “plat du jour” in France, “menu del giorno” in Italy, and variations on “dagens rett” in Scandinavia). These are sometimes limited to early seatings usually before 7:30 p.m. In Great Britain and Ireland, look for early-bird dinner specials, allowing you to eat well and affordably, but early (about 5:30 to 7 p.m.).

Speaking of hours, restaurants and pubs in Europe don’t usually serve meals throughout the day. They’re typically closed late afternoon (about 2 p.m. until dinner starts). In between meals, you’ll find plenty of snack bars happy to feed you.

To save money at restaurants, order smartly. Main dishes are often big enough to split. Add a bowl of soup or something small to supplement. Don’t worry about coming off as cheap; prices are high for Europeans, too. Waiters are generally understanding and accommodating. However, you should be careful in France, where splitting meals at restaurants can be frowned upon. Instead, head for a cafe where it’s perfectly acceptable to split meals, or order just a salad or sandwich, even for dinner.

In Italy’s restaurants, I forgo the expensive second course. I’d rather order appetizers and a first course, asking for the best meats and cheeses and the chef’s favorite pasta dish of the day.

A carafe of wine or a glass of beer are generally affordable at restaurants, but are priced so high in Scandinavia that it’s downright sobering.

To really save money, seek out alternatives to restaurants. Ethnic eateries are usually cheap and provide a welcome break from Europe’s often heavy fare. Eat in, or get your meal to go. Cafeterias, delis, and fast-food chains with salad bars are tourist-friendly, and good for a quick meal.

One of the biggest surprises for Americans at Europe’s restaurants is the service, which can seem excruciatingly slow when you’re eager to get out and sightsee. Europeans spend at least two hours enjoying a good dinner. At fine restaurants, fast service is considered rude. If you’re in a rush, just say so, and you’ll get snappy service.

Tips are considered a small bonus to reward great service. Usually you can just round up the bill a bit. In many countries, a 5 percent tip is adequate and 10 verges on excessive. Tipping 15 to 20 percent in Europe is unnecessary, if not culturally insensitive.

Of course, each country has its own quirks when it comes to dining. Spaniards eat dinner very late (after 9 p.m.). In Italy, it’s common to be charged a “pane e coperto” (“bread and cover” charge) just to sit down. In Portugal, appetizers (olives, bread, etc.) that are automatically brought to your table are not free; you touch them, you pay for them. If you see a “Stammtisch” sign hanging over a table at a German restaurant, it means that it’s reserved for regulars.

A good guidebook will fill you in on the do’s and don’ts in each country.

Specialties add spice to your travels. Try an Indonesian rijsttafel (rice table) in Amsterdam, souvlaki in Greece, a smorgasbord in Sweden, goulash in Hungary, fish ‘n’ chips in Britain, brats in Bavaria, and mussels in Brussels.

Eating in Europe is sightseeing for your taste buds. Make sure to experience it to the fullest degree. The memories of good meals can satisfy you for years.

Rick Steves (www.ricksteves.com) writes European travel guidebooks and hosts travel shows on public television and public radio. Email him at rick@ricksteves.com, or write to him c/o P.O. Box 2009, Edmonds, WA 98020. Rick grew up in Edmonds, Washington and studied at the University of Washington where he received degrees in Business Administration and European History. But his real education came in Europe since 1973 he’s spent 120 days a year in Europe. Spending one third of his adult life living out of a suitcase in Europe has shaped his thinking. Today he employs 80 people at his Europe Through the Back Door headquarters in Edmonds where he produces 30 guidebooks on European travel, the most popular travel series in America on public television, a weekly hour-long national public radio show, and a weekly column syndicated by the Chicago Tribune.