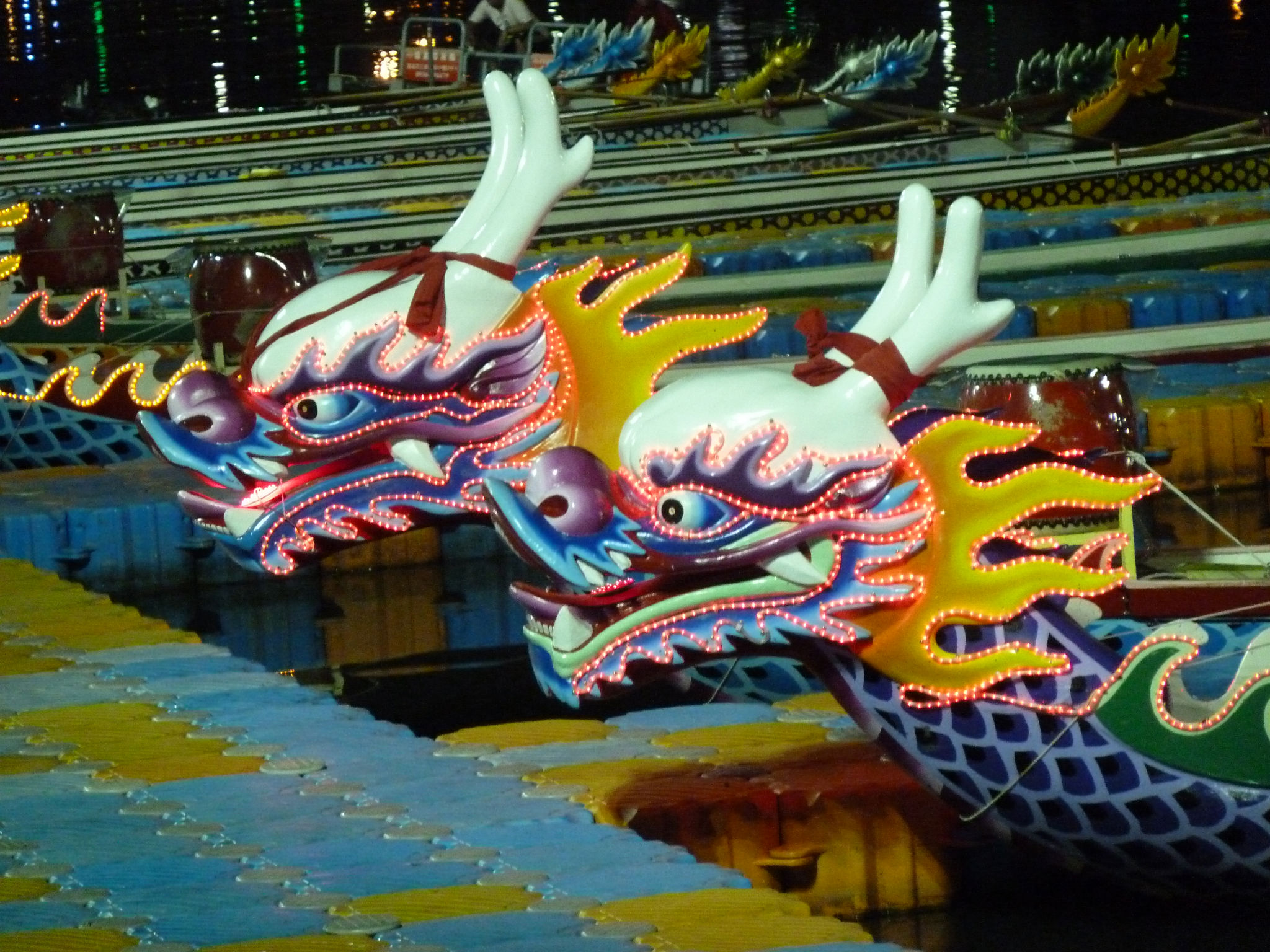 Dragon boating in the northwest is a popular water sport these days. Alice Goldberg has taken an active part in the sport since her arrival at Mirabella. Her team, the Seattle Flying Dragons, do their training on Lake Union all year and in all weathers. They recently joined three other northwest groups to participate in the annual Dragon Boat Festival in Kaohsiung, Taiwan. To take notice of this extraordinary international adventure, we share three stories below. The first is Alices account, followed by that of Lee Bjorklund, one of the Seattle-based organizers and leader of the Seattle Flying Dragons. The third article is by Mirabella resident Beatrice Tung. It is based on a story she originally wrote some years ago for her own children, and others of Chinese descent, to teach them about their culture. She tells the story of the origin of the Dragon Boat Festival.

The only cost to the participants was a group airfare to Kaohsiung, Taiwan. Our hosts paid for our room and board at a five-star hotel (Howard Plaza Hotel Kaohsiung). Shopping was extra, but of course that was one of the best parts of the trip. We had a morning of sightseeing, and then a bus picked us up and took us to the racing venue along the Love River. It rained every day at some time or other, as it was monsoon season, and one day of practice was cut short because of the rain. Winners of the races received cash and a certificate. Our team did not win, but the ancient one among our group was recognized with a certificate and a trophy. by Alice Goldberg

I guess the best summary of the Seattle Dragons 2012 trip to Kaohsiung, Taiwan is that we went, we raced, and we captured the hearts of many Taiwanese…and probably a few Israelis in the process. Thirty of us were in the group, representing the Civil Serpents from Portland, SAKE, TSNW, and the Seattle Flying Dragons all under the banner of the Seattle/Kaohsiung Sister City Association. I understand there were 140+ teams in all, 11 of them being international. We placed 6th among the international group, with a best time of 2:55 and change. All racing was up hill, in a tidal river that dropped more than four feet during the day. So, theres no clue as to how our times would relate to any other venue. The hospitality and accommodations were outstanding. Our every need was met, including some that we hadn’t even considered.

The weather was a bit different from around these parts. The low was about 83, and always with 100% humidity. Then, there was the typhoon that shut the entire city down for two days. There were three particular highlights, among MANY. One was Alice Goldberg, our drummer, who was interviewed by three major newspapers and three TV stations. She was presented with a special plaque and framed porcelain dragon by the Mayor of Kaohsiung, and was photographed like the rock star she is wherever she went. They called her Super Alice. The second was the relationship building between our two cities, with respect to dragon boat racing in both. The third was certainly Valery and Clydias work, coaching the Israeli team from Haifa in the hotel pool. We quickly learned that only three of them had ever been in a dragon boat, and their steersman had yet to ever steer one. I cant fail to mention the fourth one too…we learned a lot. by Lee Bjorklund

Long ago, during the Warring States period, (475BC 221BC) China was divided into seven small kingdoms. In one of these kingdoms there lived a man named Chu Yuan. He was a poet, as well as minister to the king, and he helped rule the land. He was selfless and kind. For many years, things went well and the people were happy under his guidance. The kingdom was peaceful, and the people prospered. Everyone loved Chu Yuan. Unfortunately, at the same time, there was another minister who was wicked and greedy. In order to gain the kings favor, he flattered him and encouraged him to do anything he desired, no matter what harm it might do to the people. Therefore, little by little, the evil minister turned him from a good king into an evildoer. The king raised taxes to get more money, and waged wars to grab more land. While they were having lavish parties in the palace with plentiful food and wine, people in the streets were dying of starvation. In his heart, Chu Yuan felt the misery of the people. He begged the king over and over again to give up his evil ways. The king wouldnt listen to Chu Yuan, and in a fit of anger he banished him from the palace.

Chu Yuan, sad and disgraced, wandered from place to place. In deep sorrow he wrote many poems about his love and concern for his country, and his king. He hoped against hope that the king might hear the poems, and be moved to amend his evil ways. Years passed however, and there was no sign of reform. Finally, in desperation, the good poet decided to throw himself into the river. Perhaps then, he thought, the king will be shocked to his senses.

When the news of Chu Yuans drowning spread throughout the kingdom, people came from far and near to mourn their beloved poet. They wept and tossed food into the river, lest Chu Yuan should be hungry in the afterworld. Yet, a friend of the poet saw him in a dream. I cannot get the food you sent, Chu Yuan seemed to say. It disappears into the water. Please wrap it up in bamboo leaves, so that it will keep together.

Ever since that time on the date of his death, which is the fifth day of the fifth moon, the Chinese people have honored the memory of Chu Yuan. They prepare rice dumplings and wrap them up in bamboo leaves called zng zi. The people also honor him by holding boat races in the river. The boat races are traditional customs to attempt to rescue the patriotic poet Chu Yuan. The boats are usually long and narrow in shape with carved dragon heads as decorations. The sides of the boats are carved in scaly patterns to resemble the body of a dragon. That is why that day is also called the Dragon Boat Festival. Competing teams row their boats forward to the rhythm of drumbeats, racing to the finish line. Today, people still eat zng zi and participate in dragon boat races. This is to commemorate Chu Yuan’s sacrifice on Duanwu, the fifth day of the fifth month of the lunar calendar. Together with the Chinese New Year and Mid-Autumn Festival, Dragon Boat Festival forms one of the three major Chinese holidays. by Beatrice Tung