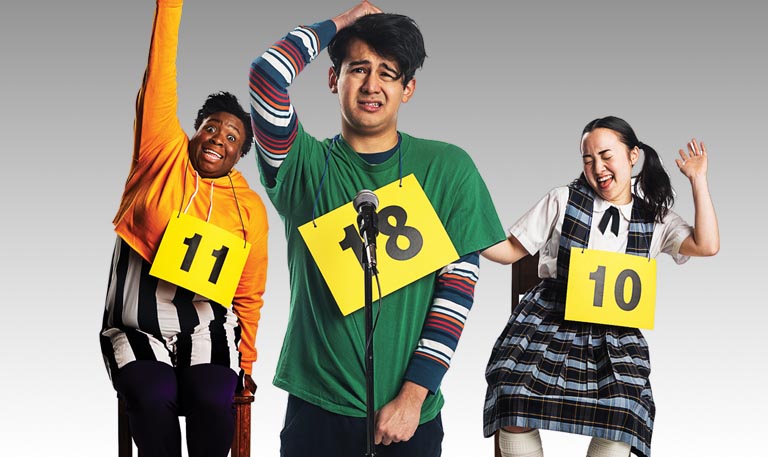 If you enjoy live theater consider this: there is great pleasure in sharing this long-running, admirable art form with a young person. Be it your son or daughter, a grandchild, a niece or nephew, or simply a friend, exposing younger people to the magic of performances that take place right here, right now can foster a meaningful rapport—or in any case provide a memorable evening out. And theater is a reminder in our digitally-obsessed era that not all entertainment comes from clicks on a cellphone or a computer keyboard.

Finding family-friendly productions with cross-generational appeal can take a bit of doing.  But with a little research and some tips from stage-loving friends, you can find appropriate shows at a variety of Seattle area theaters. Just be clear: Is the production’s subject matter of interest to you and your young companion? Is there nudity, heavy profanity, or other aspects of a show that you might consider too mature, or too difficult to understand, for your younger companion?

If you don’t know the answers to these questions, a quick call to a theater’s box office should give you more information about what they’re offering. But keep in mind that today’s young people, especially adolescents, tend to be more sophisticated and open-minded in their tastes and comprehension than in previous generations. And even if a play raises difficult questions, it could fuel a worthwhile post-show discussion.

Here are some shows coming up in the Seattle area that you and a child or teenager could both find rewarding:

The pressure is on at spelling contests, and it affects all the quirky middle-schoolers in this hit Broadway musical presented with professional panache by the Village Theatre at their Issaquah and Everett auditoriums.

Written by Rachel Sheinkin with music by William Finn, the show draws laughs from the competition, the rivalry, and the camaraderie of a fictional “bee” via winning comical tunes like “My Friend, the Dictionary” and “Why We Like Spelling.” There is some mild profanity, and tingle or two of adolescent sexual attraction. But the show has exerted strong appeal for teens, who often relate to and are amused by the likable characters and their shenanigans. Oh, and there’s some audience participation too. Village Theatre in Issaquah through Oct. 20, and at the Everett Performing Arts Center Oct. 25-Nov. 17, VillageTheatre.org.

Seattle Children’s Theatre, a nationally admired professional playhouse for youth, has often adapted popular storybooks for the stage. On this occasion, little ones (ages 3 and up) can take in Barry Kornhauser’s play based on “Corduroy,” a beloved tale by Don Freeman, ranked by the School Library Journal as one of the best 100 picture books of all time.

The book and play convey the story of a teddy bear who goes on a journey through a department store to replace a button missing from his overalls, so that a little girl named Lisa will buy him. Corduroy gets into a few messes—the kind that will delight youngsters, but not appall adults—before a happy ending is secured with needle and thread. Seattle Children’s Theatre, Nov. 21-Dec. 29, sct.org.

Many adults (and some kids) will remember the 1993 movie in which Robin Williams portrayed a divorced man so eager to spend more time with his children that he impersonates a jolly nanny who gets hired by their mother to care for them.

Seattle’s historic 5th Avenue Theatre will showcase the new Broadway-aimed musical comedy based on the hit film and directed by multiple Tony Award-winner Jerry Zaks. Though a bit of mild swearing and a few non-explicit sexual innuendoes are included, the production sounds suitable for young people, pre-teen and older.

It could also be fun to watch the movie first with your companion, then see the live show and afterward compare the two together. And if Mrs. Doubtfire turns out to be a Broadway hit, you’ll both have bragging rights for having seen it early on. 5th Avenue Theatre, Nov. 26-Dec. 29,  5thAvenue.org

Located in Seattle’s Greenwood neighborhood, Taproot Theatre prides itself on offering shows that grandparents and grandkids can enjoy together. During the 2019 holiday season, the company will present a new adaptation of a vintage 1947 film (which starred Cary Grant and Loretta Young, later remade into another movie, The Preacher’s Wife, with Denzel Washington and Whitney Houston) in a special format. It will be mounted as an old-fashioned radio play, complete with sound effects created before your eyes.  And the audience will be in on the act as the “live” radio audience.

Taproot has used the gambit successfully before, in a radio play version of It’s a Wonderful Life. In this case the play is about a bishop having trouble finding the money to build a new cathedral, and the angel who not only helps him raise the funds but also get along better with his wife and children. Taproot Theatre, Nov. 27-Dec. 28, TaprootTheatre.org.