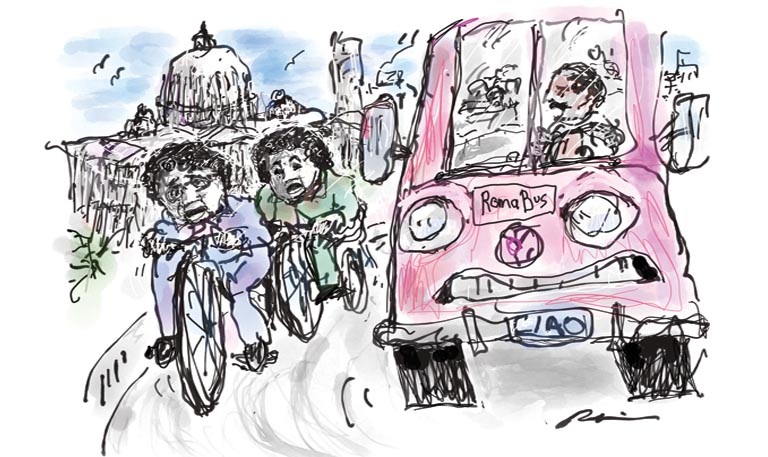 In Rome, it’s only by suggestion that those speeding maniacs known as Italian drivers heed yield and stop signs. Yet knowing that, what do we two stupido senior citizens sisters do?  Hop on bikes to explore the sights of Europe’s “Eternal City.”

Sure, we have a guide and we’ll be on e-bikes, but something is terribly missing on this excursion—the other six riders who are supposed to be joining us. All are no shows. The wimps.

“I’m sure it was the ad claiming it’s a once-in-a-lifetime experience,” says Mary. “They probably figured they’d never live to tell about it.”

“Oh Mary,” I counter. “I hate pessimism, but I greatly respect the laws of probability. By the way, do you have any clue exactly what those odds are?”

We both enjoy a laugh and that’s the last time today that even a hint of a smile will cross our fear-stricken faces.

Old World brick and cobbled stone streets are intriguing to look at, but trust me, they’re traps—regular death traps! The minute a little water drips on them (think terrified tears), they become dreadfully slick. Rome may as well swing open its hospital doors and have us bike riders steer straight into the emergency room, because it’s only a matter of time, especially given Mary’s and my advancing ages. But we know of seniors who won’t even drive a car built like a tank because it isn’t safe enough. Life-threatening endeavors; they’re so subjective.

Don’t think our guide’s startled, doubtful expression escapes us when he instructs us to mount our bikes, but not before he sprays us and our bikes with something. We think that something is holy water, probably blessed by the pope, because no ordinary, everyday priest will do.

It had been a mere 60-plus-plus years since the last time Mary and I were on two-wheelers, which makes climbing onto these bikes more like an act of God. Well, we still believe in miracles, so after many attempts, we are off and pedaling—wobbling like we’re soused. (We wish!)  Cars start honking, pedestrians are scrambling out of our way, yet some dopes are darting straight in front of our paths—oblivious to the bells we’re frantically ringing. But it’s not their fault—poor jerks. You could have that thing implanted in your cochlear and still barely hear the ring.

City buses practically kiss Mary’s and my saddle bag hips—the only things sticking out from the side of our bikes. And oh, those seats! Let’s just say that the last standing virgin should steer clear of these bikes.

I ask you, how much can one appreciate and internalize Rome’s exquisite sights—the Vatican, Fontana di Trevi, the Spanish Steps, and the Pantheon—when you’re petrified, sweating, hot, and hurting? The presence of armed guards with machine guns is highly disconcerting, but not as much as having to weave in between vehicles that could all qualify for the Indy 500—right speed, wrong country. Mary and I are both mentally and physically exhausted, and suddenly I have this urge to shout out something I’m certain the guards have never, EVER heard from anyone before—“Shoot me!”  But with age should come wisdom and restraint, because some people might take you verbatim. Besides, the real reason that I don’t plead with them is that I don’t know how to say those two little words in Italian.

Obviously, Mary and I have lived to tell about our harrowing romp in Roma. The crazy part is that we would probably do it again. The not-so-crazy part is that we will do it before we hit 80—maybe. I don’t know why, but suddenly the following lyrics are popping into my head, and I’m proclaiming them as a theme song for all senior citizens:

We are the champions, my friends

And we’ll keep on fighting ’til the end …

Karen White-Walker is a published writer and playwright. Her stories have appeared in numerous newspapers and magazines and eight of her plays have been produced. “I’m most comfortable writing articles about and for senior citizens,” she says, “because being one myself, I know of the trials, frustrations, and the feelings of accomplishment that make us who we are today—a feisty bunch!”