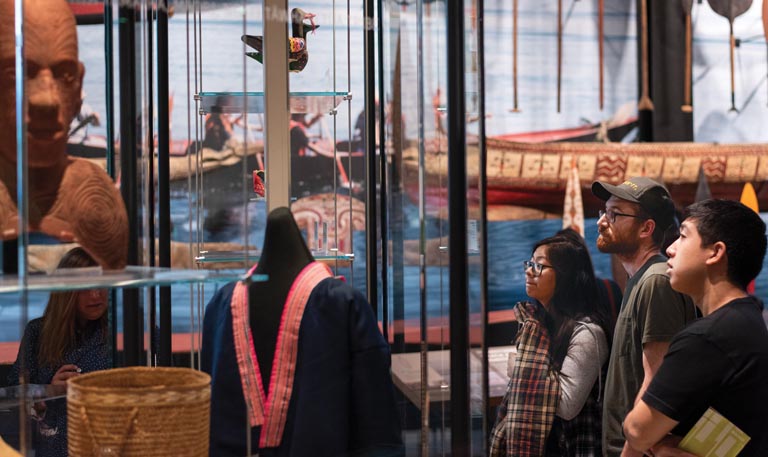 Here’s a little secret that many of you may already know.

Children love learning about dinosaurs. But so do older adults.

Therefore, it’s not just kids clamoring for a look at the life-sized dinosaur skeletons in the paleontology and fossil wing of the splendid new Burke Museum at the University of Washington. You’ll find multiple generations of museum-goers there, fascinated by the towering creatures that roamed the earth millions of years ago. They’re finding out much more about them thanks to the Burke’s ingenious, state-of-the-art new exhibits and onsite scientific experts.

And it’s not only the dinosaur features and the giant, awe-inspiring whale skeleton in one of the side entrances of the museum that grab your attention as you wander through this handsome, multiple-story, wood-and-glass faced structure in the northwest corner of the sprawling UW campus.

The Burke houses Pacific Northwest Coastal tribal art and artifacts including totem poles and button blankets. Visitors enjoy panoramic views of the Earth’s 4.5 billion-year history, and learn the interconnections between land, water, air, plant and birdlife. The imprint of generations of human beings on local culture and geography are explored in eye-catching ways throughout the inviting and spacious facility.

This treasure trove of materials has a hands-on, interactive design that makes it an especially captivating way to spend time with friends and relations, or simply on your own. The 113,000 square-foot museum (66% larger than the previous Burke building) invites even the youngest visitors to participate in learning. They can step into a carved canoe, climb on an orca whale statue, examine a tide pool, and more in the “please touch” areas of the museum.

Though this is clearly an all-ages resource, it was initially due to the efforts of young people that the Burke was born. A high school group called the Young Naturalists Society founded the museum in 1885, in a much smaller building on campus. Their mission was to collect and house specimens and objects documenting the natural history of the state.

Designated the official Washington State Museum in 1899, the institution has greatly expanded its holdings and popularity since then. Many years and several moves later, by the 1990s it was known as the Burke Museum—after Thomas Burke who, with his wife Caroline McGilvra Burke, donated their enormous collection of scientific and Pacific Northwest native cultural materials to the institution. But after moving several times, by the 21st century it was bursting at the seams of its cramped facility.

There was considerable government and private support for building the new Burke, which officially opened last October, at a construction cost of $99 million.

In addition to expanding its exhibit areas, and adding classroom and activity spaces, the museum created a new feature that allows visitors to watch scientists and others prepare specimens and artifacts. There are a dozen visible laboratories and workrooms with large windows, so you can peer in and observe someone repairing a piece of decorative clothing from a Northwest Native American tribe, or painstakingly cleaning and arranging an animal skeleton or plant specimen for display. (The Burke now has an amazing 16 million objects in its collection.)

There is no wasted space here. As you walk down a brightly lit hallway, you can scan “Syndecdoche,” a three-story mural by RYAN! Feddersen, an award-winning artist who is a member of the Confederated Tribes of the Colville. For this mural, she has created dozens of black vinyl cut-outs and 3-D fluorescent acrylic shapes from the natural and human-made world (from insects and fir trees to gas pumps and airplanes) that represent motifs in the Burke collection.

Every aspect of the open, airy building, designed by lead architect Tom Kundig of the local firm Olson Kondig, is thoughtful and educational. (One of the most arresting is a display of layers of human and animal landfill from different periods over the centuries.) But gardeners and plant lovers should not overlook the building’s landscaping and multipurpose courtyard created by Shannon Nichol of Gustafson Guthrie Nichol. In a pleasant outdoor area of tiered steps and open spaces designed for outdoor events more than 80,000 native Pacific Northwest plants are arrayed.

The facility also includes a sizable gift shop and a bustling café, where you should expect to wait a while in line to put in your order. And at the main, on-campus entrance there is the spacious Cascade Room, a quiet place to gather with others, relax, and gaze at the 16-foot tall, recently restored grand Louis Comfort Tiffany window, a landscape with peacock that has long been a favorite in the Burke’s historical collection.