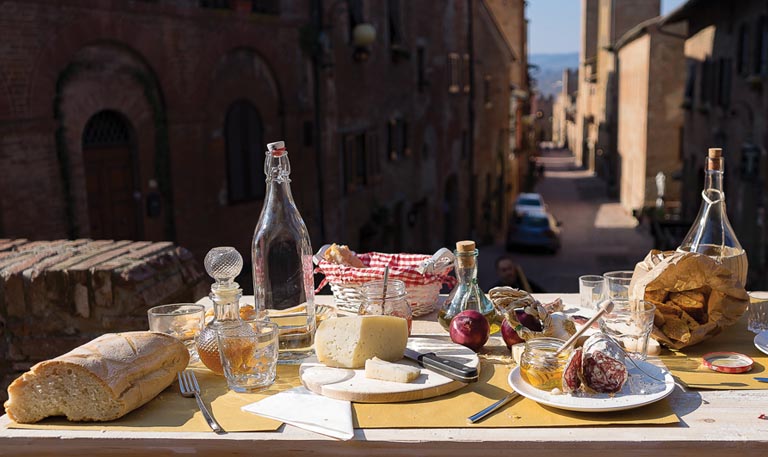 Even if we’ve had to postpone trips to Europe, I believe a daily dose of travel dreaming can be good medicine. Here’s one of my favorite travel memories—a reminder of what’s waiting for you in Europe at the other end of this crisis.

I’m using my quarantine time learning how to cook. One thing is clear: I’m nowhere near as good as the Italians. But I can dream of those “meals of a lifetime” that seem almost routine in Italy.

Spending a month in Italy, the thought of eating anything other than Italian food never occurs to me. Other than France, I doubt there’s another country in Europe that could hold my palate’s interest so completely. One reason I don’t tire of going local here is that this land of a thousand bell towers is also the land of a thousand regional cuisines. And I celebrate each region’s forte.

Tuscany is proud of its beef, so I seek out a place to sink my teeth into a carnivore’s dream. My favorite steakhouse is in Montepulciano. The scene in a stony cellar, under one long, rustic vault, is powered by an open fire in the far back. Flickering in front of the flames is a gurney, upon which lays a hunk of beef the size of a small human. Like a seasoned blacksmith, Giulio—a lanky, George Carlin look-alike in a T-shirt—hacks at the beef, lopping off a steak every few minutes. He gets an order and then it’s whop! … leave it to cleaver.

In a kind of mouthwatering tango, he prances past boisterous tables of eaters, holding above the commotion the raw slabs of beef on butcher paper. Giulio presents the slabs to my friends and me, telling us the weight and price and getting our permission to cook it. He then dances back to the inferno and cooks the slabs: seven minutes on one side, seven on the other. There’s no asking how you’d like it done; this is the way it is done. Fifteen minutes later, we get our steaks.

In Italy, the cuisine is revered—and the quality of the ingredients is sacred. Italians like to say, “La miglior cucina comincia dal mercato”—“The best cuisine starts from the market.” They care deeply about what’s in season.

One night in Florence, I’m dining with my friend Cincia at her favorite trattoria when the chef comes out to chat with her. They get into an animated debate about the ingredients: “Arugula is not yet in season. But oh, Signora Maria has more sun in her backyard, and her chickens give her a marvelous fertilizer.”

Then the topic changes to the cuisine turmoil caused by erratic weather. Vignarola, the beloved stew consisting of artichokes, peas, and fava beans, is on the menu before its normal season. Cincia, seeming traumatized, says, “Vignarola, how can it be served so early? I’ve never seen it on a menu before Easter.” The chef, who only makes it for a few weeks each spring during a perfect storm of seasonality when everything is bursting with flavor, has to convince her that the season has changed and it’s on the menu because this is the new season.

Enjoying the commotion, I explain to Cincia that this is the kind of restaurant I seek out in Italy. It ticks all the boxes: It’s personality-driven—a mom-and-pop place­—and run by people enthusiastic about sharing their love of good cooking. It’s a low-rent location, with lots of locals. The menu is small because they’re selling everything they’re cooking. It’s in one language, Italian, because they cater to locals rather than tourists. And it’s handwritten because it’s shaped by what’s fresh in the market today.

Cincia then takes control, telling me to put away my notepad and stop being a travel writer. She says, “Only a tourist would rush a grappa or pull the fat off the prosciutto. Tonight, we eat with no notes. We eat my way.” Reviewing the options, she says to the chef simply, “Mi faccia felice” (Make me happy).

Rick Steves (www.ricksteves.com) writes European travel guidebooks and hosts travel shows on public television and public radio. This story is excerpted For the Love of Europe, a collection of 100 favorite memories from a lifetime of European travel. Email him at rick@ricksteves.com and follow his blog on Facebook.