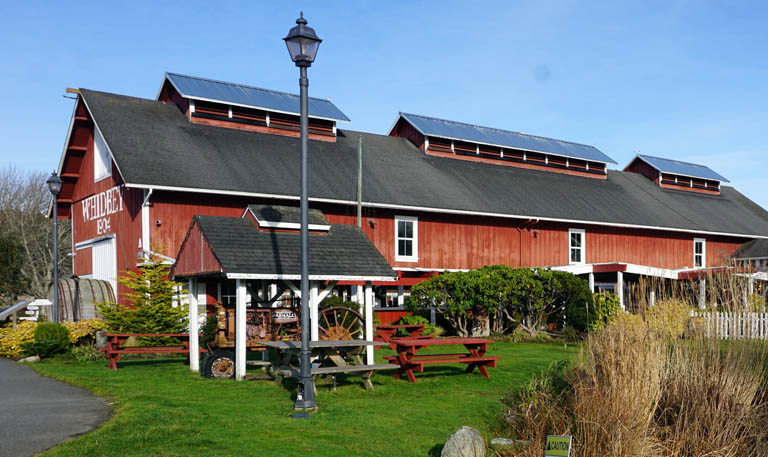 There are three portals to Whidbey Scenic Isle Way. Two are ferries crossing Puget Sound and Possession Sound and the third, a bridge sitting 18 stories above Deception Pass. All of them drop you onto an island where the agricultural bounty, farm-to-table food producers, and ethos for rural preservation join forces for a perfect summer culinary get-away.

To fully appreciate the island’s bounty, begin near its midpoint at the 522-acre Greenbank Farm. Built as a dairy operation in 1904, by 1970 the farm had also become the largest loganberry producer in the U.S. Today, the land with its iconic red barn, out buildings converted to retail and offices, and the original homestead are owned and maintained by the Port of Coupeville and administered by a trust. Two community gardens (one for veterans and one solar-powered) and a demonstration native plant garden speak to the farm’s community and environmental operating values. The former loganberry fields overlooking the Cascade and Olympic Mountains and Puget Sound are lined with trails open to the public and their off-leash dogs, if the red flag is flying. Greenbank wines, cheeses, and pies, as well as other locally sourced foods, are sold on the premises.

South of Greenbank, historic Bayview Corner is anchored by Bayview School, built in 1909, and the Bayview Cash Store and Community Hall, both built in 1924. The two-story, white clapboard Cash Store building and grounds were renovated by a local nonprofit in 2004, and today they house local businesses as diverse as a taproom, bicycle shop, and the Bard Boutique, which supports the popular Island Shakespeare Festival. Next door’s Bayview Farm and Garden is nirvana for plant lovers. Inside is an expansive general store selling books, seeds, garden implements, clothing, jewelry, and gifts. Outside their garden experts will help you select a native plant souvenir. Make sure to drop by the Flower House Café or the next door Whidbey Doughnuts to chow down on food and libations from their locally sourced menus, best enjoyed on the decks and patios of Bayview Corner. Also take time to walk through the stunning Golden Chain Tree Laburnum Arbor and check out the Victorian greenhouse.

Whidbey’s ethos of agriculture and community mindedness is evident at The Goose Community Grocer, a mandatory next stop. At face value, it appears to be a large grocery store specializing in organic and locally sourced foodstuffs. It is that, but also a thriving nonprofit run by Goosefoot, the same organization that renovated Bayview. The store has reinvested into the community awarding more than a million dollars in grants to organizations such as the Whidbey Homeless Coalition, the Veterans Resource Center, and the Master Gardener Program. Its also developed partnerships with local famers and food producers to promote food resiliency on the island, offering free workshops and events to bring islanders together. By shopping at The Goose, you not only support local farmers, ranchers, wineries, coffee roasters and bakers, but also arts and social services.

Many of those food producers and family farmers also sell directly at the island’s four farmers markets, each open on different days of the week, from spring through early fall. For a particularly worthy farmstand stop make your way to the one at South Whidbey High School. Part of the South Whidbey School Farms K-12 project, all South Whidbey schools have at least one community garden onsite where students learn to cultivate food used in the school lunch program, at events, donations to food insecure families, and for sales at the farmstand.

Whidbey is endowed with winemakers and distillers who source their products locally whenever possible. Comforts of Whidbey Winery, Spoiled Dog Winery, Dancing Fish Vineyards, and Whidbey Island Winery grow maritime grapes on their estate vineyards. Blooms Winery is a winery and a bistro serving a farm-to-table menu. Mutiny Bay Distillery and Whidbey Island Distillery turn out artisan liqueurs and whiskeys. While Whidbey’s wines and distilled products can be found on local menus and store shelves, far better to drive a scenic backroad to a tasting room located in a restored barn or former boathouse and meet the friendly, local makers.

The island is flush with remnants of its agricultural history. Ebey’s Landing Historic Reserve is a whopping 19,333 acres of preserved central Whidbey Island. Its part of the national park system and the nation’s first historic reserve. Visitors learn about land that was farmed for centuries by area Native people who settled there to grow root crops like bracken fern and camas. Today the reserve is dotted with privately owned farms, many of them homesteaded in the mid-1800s and still in the family and others farmed by graduates of Whidbey Organic Farm School. Touring Ebey’s rural roads, you’ll pass farmstands selling squash, honey from local apiaries, eggs, onions, carrots, and potatoes.

The island’s slogan is, “It’s the shortest distance to far away.” Once you’re on the island Whidbey Scenic Isle Way’s official 52 miles can be driven in an hour. Doing that means you’ll miss the sense of being far away. But a full exploration of its 169 square miles of agrarian and community values—that will feel as though you’ve dropped through a magical portal.