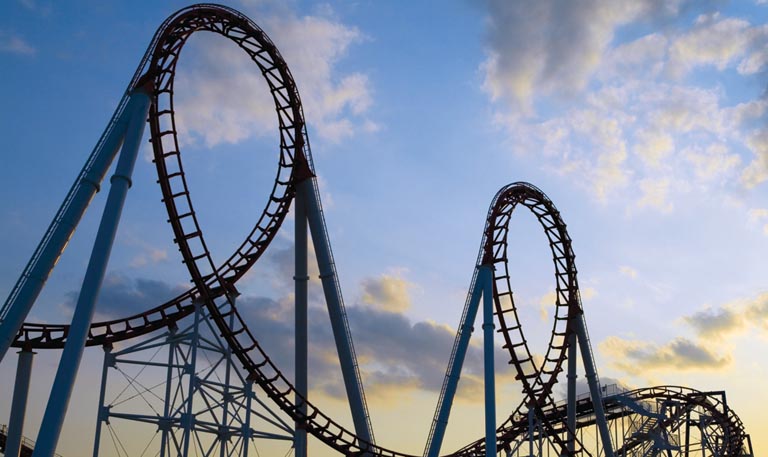 There is a scene in the 1982 film The Year of Living Dangerously that haunts me. The movie is set in Jakarta in 1965. Indonesia is in the midst of an attempted coup. In the scene, Mel Gibson (playing an Australian journalist) and Sigourney Weaver (a decoding expert at the British embassy) are driving home from a party when they see a military roadblock ahead. It’s after curfew. It’s pouring rain. They’re going to be stopped and questioned. Mel steps on the gas and smashes through the barriers, as the startled soldiers spray gunfire at the car. But Mel makes it through. He and Sigourney start laughing hysterically as they drive on. The soundtrack crescendos.

When my husband and son and I watched the film again this fall, my reaction to this scene was an intense and mournful nostalgia. At first, I wasn’t sure for what, exactly. But then it hit me: I was nostalgic for recklessness. Not that I’ve ever been quite that reckless. But that boldness, that thrill of doing something just slightly crazy, “I miss that so much,” I thought. “I’ll never get to be reckless like that again.” Not because I’m not young, but because of how 2020 and 2021 have changed me. Us. The world.

NPR calls its twice-weekly email digest of coronavirus news, “The New Normal.” One of my favorite podcasts, Krista Tippett’s On Being, has lately featured segments on the importance of gathering and on the importance of solitude. AgeWise King County’s most recent newsletter, which is full of common sense tips for older adults, is titled, Building Resilience in an Uncertain World. Even Morgan Stanley is touting a new podcast called Now, What’s Next?

“At any given time in America, one out of five people needs mental health help, behavioral health help, or help with substance abuse disorders. We are now at two out of five and above,” therapist David Johnson recently told me. Johnson, a longtime leader in community mental health, added that “the degree of depression and anxiety has skyrocketed.” His explanation is that the pandemic is “existentially too big a thing to let in too much of the time, and so we have to kind of parse that out, but it sits with us.” The danger is that “if we’re too threatened for too long we begin to operate in that fight, flight, or freeze frame-of-mind, and that is a tremendously anxious thing.”

Is this our new normal?

Seattle author Jennifer Haupt (In the Shadow of 10,000 Hills) went through “a period of grieving. Grieving the loss of what we had.” Haupt found herself in the spring of 2020 with a suddenly canceled contract for a second novel and an idea to put together a pandemic anthology, with sales benefitting independent bookstores. Her publisher (Michelle Halket at Central Avenue Publishing) said yes, and Alone, Together: Love, Grief, and Comfort in the Time of Covid-19, featuring 91 writers, was born.

But Haupt’s undercurrent of grief is still there. “My husband and I went to our first concert since pre-pandemic, Rickie Lee Jones, 2nd row, it was great, and the whole audience was masked,” she says. “And I just started crying because I thought, ’I don’t think I’ll ever go to a concert again without a mask on.’”

Another new normal? Yes to concerts, but yes also to masks forever?

Haupt’s second novel, Come as You Are, is now coming out afterall, in March 2022. The book launch will take place “totally on Zoom,” no in-person book tour, as there was with her first.

Zoom, it seems, is definitely part of our new normal.

Johnson, who retired shortly before the pandemic after three decades of heading up the mental and behavioral health care nonprofit Navos, is now back in private practice. Like nearly all therapists, he has a waiting list, and he worries about people who are seeking help but can’t get it. So he likes to offer a few simple techniques to reduce anxiety:

The first is a simple breathing exercise. “It’s where you do a fairly quick intake breath, hold it till four, and then let it out to eight. That does a few things: It asserts our mastery over our body and our world. Secondly, when we get anxious we tend to over-breathe and we get too much oxygen in the blood. And this deprivation of oxygen brings the oxygen level back to normal. It also is tremendously calming.”

Many people, says Johnson, may also be feeling anxious about socializing. After long periods of isolation, it’s normal for social skills to get rusty. But this is different. This is not just one person getting back into the swing of things after surgery—this is everybody, all at once.

And many people, especially introverts, are realizing there are types of socializing they actually don’t miss, like large parties where you don’t know anyone, for example. Others have found they liked Zoom more than they thought they would for certain kinds of interactions.

What Johnson hopes is that we’ll nurture two qualities he feels he’s seen more of during the past 18 months: resilience and kindness. “I have seen so many acts of kindness where people are helping each other out and my God, all these medical professionals who just day after day after day don that gown and do this work, it’s absolutely heroic.”

Resilience may be harder to pinpoint. But older adults might have an advantage here. Though we have not previously experienced a worldwide pandemic, we have weathered other tragedies and hardships, and we have learned a few coping skills along the way. For example, the ability to zero in on what matters most. “When we come into these really harsh places in life, a lot of stuff drops away. A lot of stuff just ceases to hold its importance,” says Johnson. And what is important becomes urgent. “The disparity between whites and people of color in vaccination and in prognosis of health has just been really stunning, and we have to stare at that, and we have to figure out how we do that better.”

Haupt said she’s “dealt with depression for as long as I can remember,” and so she understands the importance of having “strategies for just cultivating joy. So for me, that’s what got me back into finishing up my third novel. Because you can’t just sit in that place of darkness.”

The joy many of us felt at the prospect of vaccines grew more complex as 2021 progressed, what with the number of people who chose not to vaccinate, and the resultant Delta variant surge. I went from eagerly planning long-postponed trips to reluctantly paring them back. But the few flights that I did make—to Santa Cruz, Calif. and to Washington, D.C., both of them to see friends I hadn’t seen in more than two years—buoyed me. Not the actual flights (all were uneventful and endurable), but the joy of being with people I love too much to only ever see on Zoom, though Zoom helped when that was the only option.

“We have to live our lives,” my friends and I agreed.

My 87-year-old father and 86-year-old stepmother said the same thing when they told us they would be heading back to their Arizona home after spending their first winter in Seattle in 20 years. They’re vaccinated, they’ve had their boosters, their various health challenges are going to exist whether they’re here or there. And they have to live their lives.

I am hearing many versions of that phrase, especially from our most globe-trotting of friends, who are dusting off their passports and going to Italy, Norway, Spain and Mexico; in two of those cases they’re meeting new grandbabies. But as I listen to people talk about the months ahead, I also hear these phrases more often than I used to: “I’m choosing carefully.” “I’m being intentional. I don’t want to waste time.” “I want to volunteer in ways that matter.” “I want to read thoughtfully.” “I want to work, yes, but only as much as I have to, and/or if I find it meaningful.”

Here’s one final bit of advice from David Johnson, regarding living your life, but safely. If you are vaccinated, but you have family or friends who have chosen not to be, here’s what to say when they ask you about, for example, your holiday plans: “I think if we’re deeply respectful we can say, ‘You choose not to be vaccinated, I don’t have to choose to be intimate with you.’”

Our new normal may be the opposite of reckless. For quite a while. But when the time feels right again, here’s what I’d like to do: Land in another country without a planned itinerary.