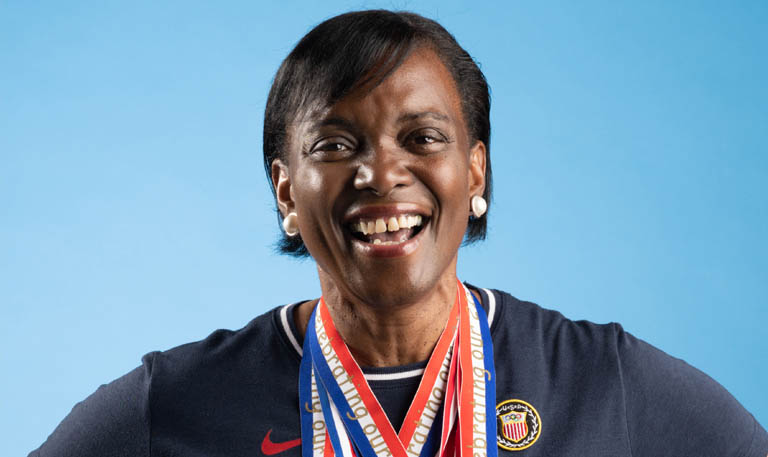 Madonna Hanna is busy. She’s got records to break. She is closing in on the Washington state records for the 50 and 100 meters, and on this rainy morning, the state Senior Games Track & Field Finals are just six weeks away. But taking the time to drive from her home in Tacoma to a photographer’s studio in Seattle to pose for the cover of 3rd Act Magazine is also important, because Hanna’s core mission is to motivate all of us to believe that anything is possible.

“This is what 68 going on 69 looks like!” she says, as she flexes her bicep for the camera. “This is what a millennial coach will do for you!”

Hanna is five-foot-seven, but looks taller, as if her legs had stretched and stretched over a lifetime of running. But that is not her story. It was not until she was 57 that she woke up one day and had an overwhelming feeling that she wanted to run. “The seed of speed lay dormant in me for 50 years,” she explains. Though she had never been an athlete, she somehow knew, deep down, that she would be fast. And so, at an age when most people tend to slow down, or stoprunning altogether, Hanna was ready to start.

Her first coach was her husband, Stephen Hanna, who she says favored “old-school” but effective training techniques like running with a backpack full of bricks. His drills and her determination turned out to be a powerful combo. In her first Washington State Senior Games in 2011, Hanna won gold in both the 50 meters and the 100 meters. In 2013, in her first National Senior Games, she came in 9th in the 100 meters and 11th in the 200 meters, and earned a bronze medal in the 4 x 100 relay. The list goes on. Though she ruptured her Achilles tendon in 2014—right in the middle of a race, with a brutal snap as loud as the starting gun—Hanna was able to come back and again win two gold medals in the 2017 Washington games.

Stephen Hanna died of cancer in 2018. He and Madonna had both been beloved teachers: he at a Tacoma elementary school, she as a fashion marketing teacher at high schools in Bremerton and later Tacoma. For Hanna, it was a second career, after several years of working in the fashion industry. Her “Flights of Fancy” runway shows for students with disabilities earned her a Point of Light Award from President George H.W. Bush. She was also recognized twice as Washington state’s Vocational Teacher of the Year, and twice as the Regional Teacher of the Year. She also was honored with a prestigious Milken Education Award.

After our photo shoot, Hanna told me stories of some of the students, including an autistic girl named Melissa, who smiled for the first time in her life when she modeled in one of the fashion shows. Some of Stephen’s grade school students also got to walk the runway.

Hanna promised her husband that she would not quit running. He had been by her side during her long recovery from a near-fatal car accident in 1987, and helped her bounce back from the Achilles rupture in 2014. He knew she could and should get back to the track after his death.

So she went in search of a coach. And “after years of teaching millennials,” she found a millennial track star—27-year-old Olympic hopeful Marcus Chambers—who put her on a whole new training regimen. Two days a week she works her hamstrings, quads, glutes, triceps, biceps, back, arms, and abs at the gym. Two rounds of everything. Sometimes she adds pushing a sled with weights on it, “focusing on the first five steps.” Three days a week, she does track drills: many, many rounds of starts, sprints and laps. Diet is crucial too: egg white omelets loaded with kale, spinach, mushrooms, onions, and turkey bacon; cereal, blueberries, yogurt, nuts, smoothies. And that’s just breakfast. Her go-to snacks are bananas, apples, oranges, gummy fruits, and the occasional éclair. Once a week, she works out with Marcus for an hour.

But Hanna is not only a 69-year-old track star. She is also a longtime member of Toastmasters, and has competed at the international level, where she made it to the 2015 semi-finals, meaning she was in the top 100 out of 30,000 competitors. She is also the author of the children’s book,  Mommy, Why Are My Eyes So Big?, which was inspired by her recognition, as an educator, of the need for children who have been bullied for being “different” to build self-esteem and resilience. Hanna grew up in a white, conservative suburb of Boston, so she knew firsthand what that kind of bullying felt like.

She is also an actor. If you have attended shows at the Tacoma Little Theatre, you’ve likely seen her on stage. Recent roles include Edna in Children of a Lesser God.

And if all that doesn’t sound like enough, Hanna is a motivational speaker. She likes to talk about “pebble power,” especially to audiences of older adults. “I hold this little pebble in my hand and I say, see this little pebble? When you toss it into liquid, it creates ripples. This is what we can do in our lives. Because you guys have so many talents and different things that you can do, that you can share with people, and that you’re going to create. And then I tell them about myself, about the people I’ve been able to empower and motivate and encourage, and then I ask them, ‘What’s your pebble power?’”

Her inspiration is the “pebble power” of the disabled children she worked with on the fashion shows, who she encouraged to call out their own “beautiful difference,” rather than let others define them. “I have seen kids who have become empowered by the fact that they have Tourette’s, or a big birthmark on their face, or something else. Because now they can say, ‘Yeah, this is my beautiful difference. Glad you noticed.’ You know?”

Back at the photo shoot, Hanna happily strikes pose after pose for photographer Ernie Sapiro. With her experience in the fashion world, she excels at holding each pose as long as necessary. “Yes, I eat Wheaties! Three bowls a day!” she jokes, arms raised in perfect position. “You think I look like Wonder Woman? I am Wonder Woman!”

And she is. Except that she’s not. What Madonna Hanna wants us all to embrace is the idea that real people can be actors or toastmasters or award-winning teachers or track stars—if they’re willing to put in the training time. And if they believe that anything is possible.

Ann Hedreen is an author (Her Beautiful Brain), teacher of memoir writing, and filmmaker. Ann and her husband, Rustin Thompson, own White Noise Productions and have made more than 150 short films and several feature documentaries together, including Quick Brown Fox: An Alzheimer’s Story. Ann is currently at work on a book of essays.