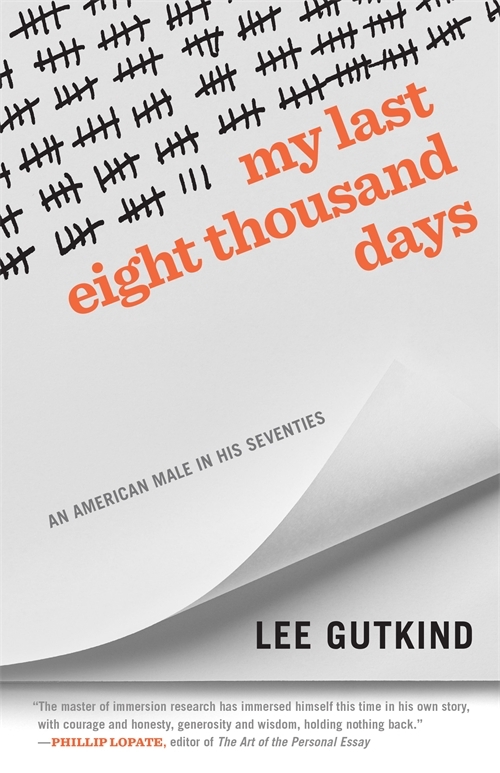 “When you hit rock bottom, dig farther down. Grief is the seed of singing, shame the seed of song,” wrote Kim Stafford in his poem titled “Citizen of Dark Times.” During this pandemic year, I have gone back to Stafford’s poem many times, and I thought of it as I read Lee Gutkind’s memoir, My Last Eight Thousand Days: An American Male in his Seventies.

When Gutkind hit rock bottom, he started digging. He found grief, he found shame, and he found a way to understand his own life story.

Gutkind, the founder of Creative Nonfiction magazine, has written more than a dozen nonfiction books on subjects ranging from motorcycle culture to organ transplantation. He taught creative nonfiction for many years at the University of Pittsburgh and is now a professor and writer-in-residence at Arizona State University. In My Last Eight Thousand Days, he finally turns his storytelling skills on himself: not to catalog his achievements, but to probe his own intense discomfort with aging.

Gutkind begins his story on the morning of his seventieth birthday, with the blare of his alarm clock at 5:30 a.m. Things have not been going well lately, he tells us. His mother, to whom he was very close, died five days before his birthday, two of his best friends died not long before that, and his decade-long romantic relationship just ended. But that’s not all. The premise of his latest book project, which he had been researching and writing for five years, had abruptly fallen apart when his hero-subject was exposed as a fraud. And just to ice the cake, he’d been putting on weight.

After the first chapter, I thought: Is this what I need to read right now? In the middle of the pandemic?

But Gutkind’s deadpan, self-deprecating, dark sense of humor began to grow on me: precisely because, as he wrote this book between his other projects and over the course of five years, it began to grow on him. He realized that he was learning not to take himself so seriously, and as he did, he became not only more comfortable in his own skin, but more likable: as a narrator, a character, and, to his own wonderment, as a human being interacting with other human beings.

The title comes from an article Gutkind came across by Joe Coughlin, the director of MIT’s AgeLab, in which Coughlin posits that our lives can be roughly divided into chunks of eight thousand days: from birth to 21; from 21 into your forties; from there to sixty-five. And if you make it past 65, “there’s a 50 percent chance that you will live to eighty-five. Or another eight thousand days, more or less.” Gutkind, who just turned 76, is well on his way to claiming that lucky eight-thousand-day bonus.

He is grateful. But he is also aware that, like the people he profiled in Many Sleepless Nights: The World of Organ Transplantation, “my reassuring disconnection, my safety zone, is evaporating. Not because of an organ diseased or out of whack, but simply because of wear and tear on what was then my pretty goddamn healthy body and my good fortune. In a way, and I realize I am being self-centered about this, I am facing now, or will soon be facing, what my subjects were confronting then. Gradually decreasing health, cognitively and physically, and the frustration and fear of isolation and irrelevance that comes with it.”

As Gutkind examines his past—from being the “fat kid” picked last for every team to his failed marriages to how he became a devoted practitioner and teacher of the art of writing creative nonfiction—and as he weaves in riffs on his current losses and creeping loneliness, we witness a gradual transformation of his views on aging. He realizes that being the artistic loner he has always imagined himself to be—back when he had the emotional support of his mother, wives, and best friends—is no longer going to work, now that they’re gone. He needs to make new friends. He needs to figure out how to do that. It’s humbling. But it turns out to be… fun. Who knew? And important. And I won’t say more, because it was my favorite part of the book and I don’t want to spoil it for you. But I will quote Gutkind’s final description of himself: “an aging man, but not an old man; a vital man, not a defeated or tired man… I am not the old Lee Gutkind anymore; I am, rather, the new, albeit older, me.”