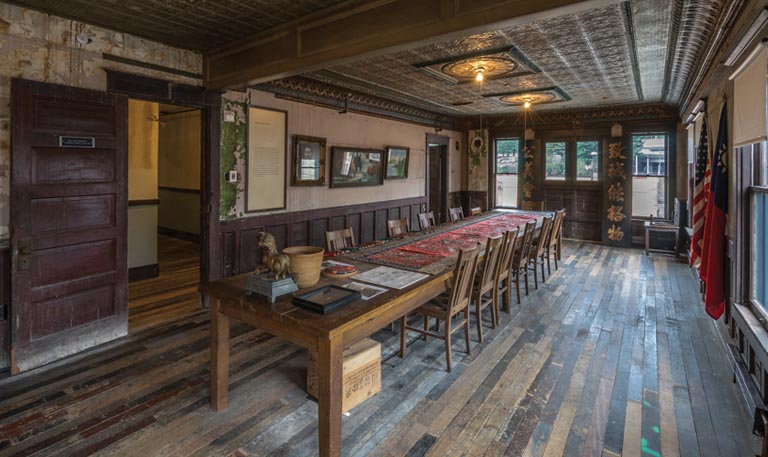 In a familiar dream, I wander my house and discover a new door. I still don’t know what’s behind that dream door, but finding a hidden place in a familiar world really happened.

Each week, I step off the bus into a neighborhood steeped in the smell of baking fortune cookies mixed with the aromas of dried fish, incense, and unfamiliar spices. I cross under a lamppost’s clinging dragon, past a park’s red arch and pavilion, and into the Wing Luke Museum of the Asian Pacific American Experience—“The Wing,” for short. Although the Chinatown-International District neighborhood is the traditional home to many Seattleites of Asian heritage, it had been unfamiliar to me. But I believe that retirement is the time to seek new learning, not relax into the familiar, and working as a volunteer in the exhibit department of The Wing has demanded that I grow.

My family stories and traditions come from European traditions. The palettes of color, taste, smell, story, and design familiar to me are rooted in European origins. Mine was a childhood of brave pioneers, flowered party dresses, Christmas stories, boardwalk taffy, Nancy Drew, and handmade patchwork quilts. Working at The Wing has opened a new treasure chest.

Housed in a historic Chinatown hotel (and named to honor the first Asian American elected to public office in the Pacific Northwest), The Wing creates exhibits by working with the communities it represents. Exhibits are made more intimate by oral histories recounting personal stories connected to a time, place, or event. At first, I transcribed interviews, but I’ve gradually been entrusted to lead them. Sitting in a quiet room absorbing the intimate stories of lives so different from mine has educated my mind and heart. Through these histories, I have come to know the owner of a bubble tea shop, the Buddhist mother of the first Korean American rabbi, and the first female Asian astronaut. I’ve heard the painful stories of Khmer Rouge survivors, and I’ve listened to Samoan tattoo artists and sports stars, from football to basketball, roller derby to ultimate Frisbee, women, and men. These stories—and the laughter and tears in the telling—exploded into my world. My understanding of America stretched and expanded.

During my lunch break, I join a convivial but generally much younger staff of colleagues with family roots scattered across Asia and the Pacific Islands. Chatting over lunch allows me a peek into different traditions of food, culture, and family expectations. There I was introduced to a variety of treasured treats never before a part of my life. A young tour guide craved a mochi, which I learned was a pastry made from sweetened rice flour and often filled with azuki red beans. Discussions of milk teas revealed the contrast between the familiar British cup of Earl Grey with a little milk and the wildly varying milk tea concoctions of flavors, sweet syrups, warm milk, and bubbles they were talking about. Azuki pastries and warming milk teas are both delicious and I’m grateful that I can easily track down new taste experiences in the neighborhood. My lunch break is always an adventure.

Young staff members offer me pop cultural insights as well. My husband and I were invited to join the group for a screening of the recently released movie Crazy Rich Asians. The universal love story of clashing families and young lovers was familiar, but enlightening were the gasps and giggles generated in the audience by stars unfamiliar to me. I might remember an actor’s small role in a Hollywood film but nothing that would have elicited the swoons of appreciation or laughter this audience expressed. That night I was introduced to a group of fine actors and actresses of Asian heritage largely unseen in American films.

My most valuable and poignant learning at The Wing comes from being a white woman in an Asian Pacific American community. As a member of a society’s dominant culture, it is an amazing growth experience to suddenly be in the minority. It has allowed me to learn from uncomfortable situations. I’ve heard young tour guides process visitor’s racist comments knowing that some were driven by hate while others were the product of ignorance. I’ve been presented with perspectives on city happenings that are totally different than mine, and suddenly I can see the validity of that point of view. I listen and continue to learn how members of my Anglo community process history and issues limited by our own vantage point and in a way that may lead to misunderstandings about the intentions, lives, and experiences of others.

I don’t have ancestral ties to Chinatown or to the people living there, but I feel at home in The Wing Luke, and I am thankful for all I am learning. I am grateful for the amazing cultures, stories, and friends I discovered when I opened the door to this special world.

What hidden doors do you pass each day?  Now is your time to turn the handle.

Ellen Kahan loves learning and new challenges. Following a career in school leadership, she views this time in her life as the glorious opportunity to pick and choose new adventures, especially those that require a little risk-taking. She lives in Seattle.