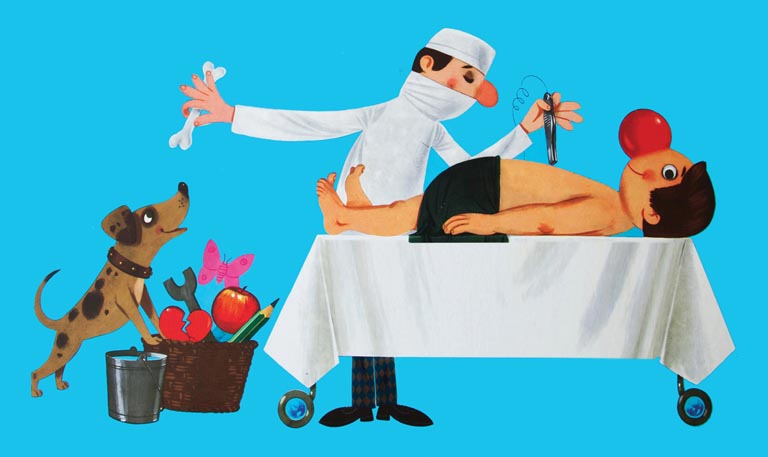 The author E.B. White once commented that “humor can be dissected, as a frog can, but the thing dies in the process.” In spite of White’s sage warning, I will wade into this murky frog pond and offer a short explanation of why humor and mirth exist—and trust that humor will survive my humble attempts at dissection.

To some, humor may seem like a frivolous behavior, a luxury when compared to behaviors like searching for food or selecting a mate. But there are good reasons to believe that humor is an evolved cognitive function that makes a significant contribution to our ability to survive and thrive.

Humor is funny. Mirth is pleasurable. Enjoyment and pleasure are biological clues that humor is important to human survival and adaptation. The reward of pleasure motivates us to engage in the specific activities that develop the skills and intelligence human beings need to prosper.

What are the adaptive behaviors that are associated with humor and mirth?

According to the authors of Inside Jokes: Using Humor to Reverse-Engineer the Mind, humor motivates us to use our brains in ways that make us smarter. We make sense of the world by creating conceptual maps of reality that are accurate enough to be successful most of the time. Humor helps us create and evaluate these mental models of the world.

Humor also helps us evaluate new information and test whether or not it fits into our existing mental maps. Humor is an alarm system in our brain. It alerts us when new information conflicts with existing ideas and it helps us resolve the conflict.

These activities take a lot of mental energy. We perform them because Mother Nature rewards the effort by making it fun and gratifying.

The story of the Roman legionnaire follows the standard architecture of a joke. It starts by constructing a mental map that is immediately confounded. “Five beers? He only held up two fingers.” Alarms are sounded! We are confused, befuddled, and put on edge.

This gentle assault on the mental map demands an explanation. Our brains are designed to seek resolutions to confusion. And, when a solution is found, we are rewarded with a flood of pleasurable feelings of self-congratulation. “Aha! I get it. Roman numerals. V = five. Ha, ha.” The pleasure of mirth encourages us to perform the important survival task of resolving confusion and keeping our mental maps in good working order.

In a journal article enticingly titled “Explanation as Orgasm,” University of California at Berkeley psychologist Alison Gopnik suggests that we are hard-wired to lust after explanations of the mysterious because confusion is dangerous and clarity is protective. The search for explanations, says Gopnik, includes a “hmm” component (that’s strange) and an “aha!” component (now I understand). Curiosity drives us to explore the “hmm” question and the effort is rewarded with a gush of pleasure when the “aha!” solution is found.

A termite walks into a bar and asks, “Is the bar tender here?”

The human species is spectacularly successful because of its ability to adapt to diverse environments and constantly changing conditions. This adaptability requires creative thinking—the ability to break away from automatic routines along with the ability to think about how we are thinking. Humor exercises and strengthens our creative thinking and our metacognition.

It isn’t easy to break free from automatic thinking routines. We often need specific techniques to get us out of a thinking rut. In his book Serious Creativity, Edward de Bono describes one such technique he calls “Po” to signify a provocation.

The idea of Po is to present a bizarre idea or image that initially confounds the mind. “A termite walks into a bar” is a provocation. Termites don’t walk into bars! The joke forces a “What if?” speculation. What if a large termite actually did walk into a bar? The mind refuses to be confounded and works to resolve the conflicting ideas, which results in creative thinking and innovative solutions.

The second part of the joke stimulates another creative technique that de Bono calls “lateral thinking.” Rather than progress along the predicted route, the mind suddenly ends up at an unanticipated destination. It has been forced out of one conceptual map (bartenders) and been thrust into another (a tender bar). This “lateral” move demands an explanation and opens the mind to new areas of investigation.

To survive and thrive in an ever-changing world, our minds need to be flexible and capable of making these “remote association” connections between far-flung ideas and concepts. Humor forces us to be more open-minded and exercises our capacity to update and amend our mental maps of the world. The more we exercise these cognitive muscles, the stronger they become and the better we are able to cope with the challenges of life.

Fortunately, Mother Nature has made this activity fun by inventing humor and endowing human minds with the emotional reward of mirth.