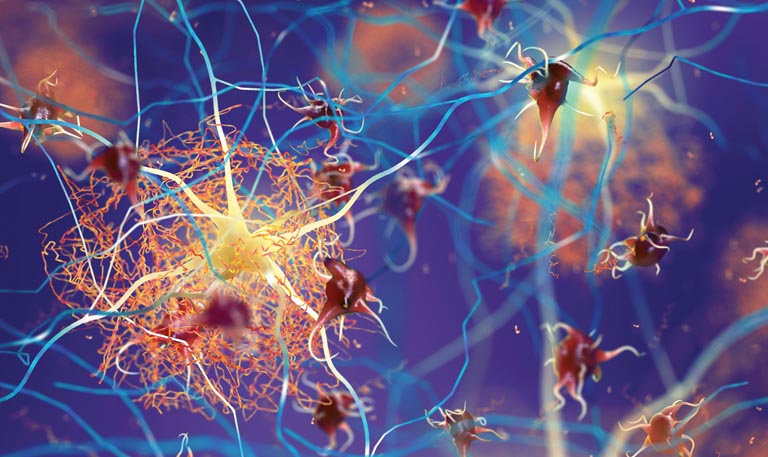 What the latest science tells us about treatment, prevention, and the impact of COVID-19 on the brain.

When Dr. Maria Carrillo was a graduate student in neuroscience at Northwestern University, she spent hours with her eye to a microscope, looking into the brains of laboratory rats. What she witnessed was astonishing.

“I realized that what I was seeing was a memory being biologically encoded,” she says. “I was watching nerve cells talk to each other.”

But when she and the research team looked at the brains of aging rats, they saw a dramatic difference. New memories didn’t “stick.” They were somehow vulnerable to quick erasure in a way that older memories weren’t.

Why? This is the question that drives dementia research. And it has driven Dr. Carrillo all her professional life.

As Chief Science Officer for the Alzheimer’s Association, Dr. Carrillo’s job is to set the strategic vision for the global research program of the organization, which is the world’s largest nonprofit funder of Alzheimer’s research. In 2020, this meant quickly ramping up a study on the long-term neurological and cognitive impacts of COVID-19.

“We will look at data from 25 different countries, which will give us information on every patient who tests positive for COVID-19, so that we can see what neurological symptoms are still occurring a year later,” Dr. Carrillo says. “People have seen neurological impacts from a COVID-19 infection. There’s something that’s impacting the brain.”

Symptoms include “delirium, headaches, dizziness and memory loss, and there are reports that these don’t resolve as quickly as the virus resolves itself.” She adds that the infection also infiltrates inflammatory cells. “Unless we start studying this today, we’re not going to be able to get results,” says Dr. Carillo.

Dr. Carrillo also voiced her concerns about how the pandemic has isolated people living with dementia. Without the positive stimuli of visitors, they’re at risk of more rapid cognitive decline. She has been a leader in urging long-term care facilities to find ways for people to maintain connections with their loved ones.

Under Dr. Carrillo, the Alzheimer’s Association is launching the U.S. POINTER study, a $100 million, five-site initiative inspired by a groundbreaking study that began in Finland. The Finnish Geriatric Intervention Study to Prevent Cognitive Impairment and Disability (FINGER) was the first randomized controlled trial to show that it is possible to prevent cognitive decline through multi-pronged lifestyle modifications, in particular physical and cognitive exercise, changes in diet (more fresh vegetables, fruits, and lean proteins, and fewer saturated fats and sugars) and monitoring of cardiovascular risk factors. The FINGER trial interventions reduced cognitive decline in participants by 30 percent. Now known as the WW-FINGERS Network, “this has turned into a global movement,” Dr. Carrillo says. “There are now 20 countries that are launching studies like this.” The Alzheimer’s Association has just added POINTER sites in 13 Latin American countries.

The POINTER study fits with the association’s ongoing research focus on what Dr. Carrillo calls middle age risk factors: midlife waist circumference, blood pressure, cholesterol, and smoking. The goal is to “create a recipe” for people in middle age and beyond that will give us all the power to decrease our own risk factors for cognitive decline by making changes in our daily lives. The POINTER study is expected to provide confirmation of what researchers have long believed—what’s good for your heart is good for your brain.

The Alzheimer’s Association is also a major funder of drug research, including studies of Biogen’s Aducanumab, the first disease-modifying Alzheimer’s treatment to be considered by the United States Food and Drug Administration. Though the FDA has asked for another Phase 3 trial, which will delay access to Aducanumab for up to four years, Dr. Carrillo sees this type of drug as part of a future in which lifestyle changes plus medication could make Alzheimer’s disease a manageable chronic illness, much like diabetes.

Another significant step forward this year has been the development of a simple blood test to detect Alzheimer’s disease. Though it’s not quite ready for prime time, Dr. Carrillo says that when it is, it will be a huge boon to both family practice doctors and research scientists, because they will be able to verify whether someone has the disease quickly and easily, rather than having to do an expensive PET scan or a lumbar puncture (spinal tap).

The pace and scope of Alzheimer’s research has increased dramatically in the past five years. Federal funding has gone from $631 million in 2015 to $3.1 billion in 2021, due in large part to the Alzheimer’s Association’s tireless advocacy on Capitol Hill. And the association’s own funding capacity was given an enormous boost beginning three years ago with the launch of California philanthropist Mikey Hoag’s Part the Cloud initiative. In 2019, Bill Gates added $60 million to the Part the Cloud Fund, which is currently funding more than 60 studies, many of them exploring areas of brain research that go far beyond the emphasis of the past few decades on amyloid plaques and tau protein tangles.

“There’s so much more happening in the aging brain that can contribute to memory loss, to brain cells changing and not holding onto memories or making new ones,” says Dr. Carrillo, making it essential that research “go beyond amyloid and tau alone at this point.” Some of the newest areas the Part the Cloud/Gates partnership are funding include mitochondria (how brain cells use energy and fuel), autophagy/clearance (how brain cells remove waste and debris to avoid clumping), and vascular contributions (how the blood supply to the brain is maintained).

Alzheimer’s research is personal for Dr. Carrillo. Both her mother-in-law and her father-in-law died of the disease. Knowing that she was watching a relentless biological process did not make it easier to see them reach the point where they could no longer create a memory of something that had just happened. But it did increase her already tenacious commitment to Alzheimer’s research. Just as she was fascinated as a student “by the fact that a brain—that is just tissue, it’s cells and blood, and some connective tissue—has the ability to create such an incredible thing as a human being: cognition, our thinking, our feeling, everything that is associated with being human,” Dr. Carrillo remains fascinated by all that scientists are learning about how the brain works, and why it sometimes doesn’t work, and what she and her colleagues can do about that.

The kind of lifestyle changes on which the FINGER and US POINTER studies are focused have long been gaining traction in the Pacific Northwest. Launched in 2013 (and featured in 3rd Act in 2016), Momentia Seattle is a one-stop source for people with dementia and their families to find ways to remain active and connected to the community. (Their website is currently chock-full of virtual offerings.) Momentia was one of several organizations and individuals recently honored with a 2020 Maude Award for innovations in Alzheimer’s care.

In Portland, Dr. Raina Croff is leading the SHARP study: Sharing History through Active Reminiscence and Photo-Imagery, which is funded in part by the Alzheimer’s Association.  Working with the PreSERVE Coalition for African American Memory and Brain Health, Dr. Croff and her team accompany older Black adults on vigorous walks focused on “active reminiscence” of their changing neighborhoods. Photos and news clippings are deployed to help them remember what was there before.

“We documented that the combination of vigorous walks and active reminiscence correlated with more energy, improved mood and modest improvement in cognitive assessments, particularly among those with mild cognitive impairment,” Dr. Croff, an assistant professor of neurology and medical anthropologist at the Oregon Health & Science University (OHSU) School of Medicine, wrote in a recent article. “SHARP walkers are not only reclaiming their history, they are claiming their place in the present by telling a more accurate and far richer story of the past.”