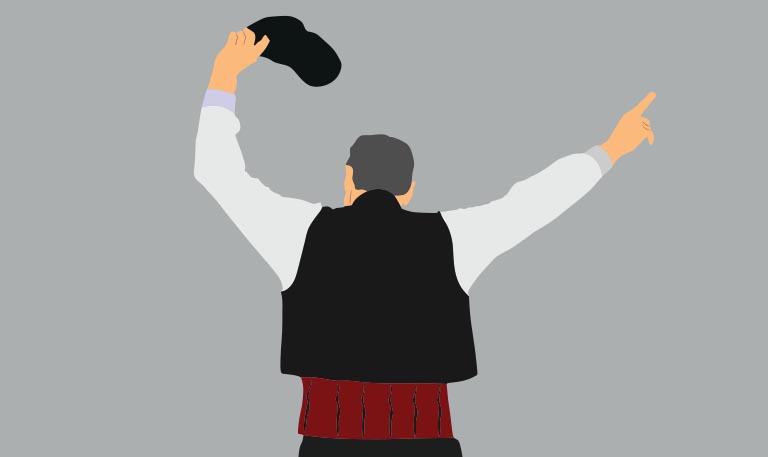 The world I lived in had a soft voice

I tended to 74-year-old Darian Christopolous’ funeral at the Greek Orthodox church. Nine long-robed priests stood in front, basking in the glory of Darian, who had worked as a special ed teacher. The vibrancy of Darian’s life shone through, and his wife and children were gracious, vivid, and beautiful. Nearly 500 people attended midday on a Wednesday.

There were too many pallbearers, so Greg, the funeral director, and I created a scrub B-team bench to follow behind the casket. All wore proper mourning clothes—the Greek men in black or charcoal sharp-fitting suits with white shirts and black ties, the women in black dresses. Four myrrh-bearers—women holding icons and pictures—proceeded behind the casket and the junior varsity “no-carry” pallbearers in an extravagant pageant.

Darian and his sons were thick Greek men who wore their weight like an expression of manliness. Darian wore his weight proudly, puffed up. His bulk was his identity. The final viewing of the body took a long time. One after another, these huge lovers of Darian bowed before him and kissed his thick hands and his forehead and patted his chest. The manly Greek men fist-bumped his still heart.

The row of seated, dark, handsome pallbearers and their lovely wives all crying for Darian witnessed what I witnessed—we watched in stereo. Some older men knelt on one knee to bow and cross themselves. Other men knocked on the wood casket, tears in their eyes. Some women kissed Darian’s forehead and patted his gargantuan, meaty hands—tenderly, but casually. Everyone leaned down. The leaning, the bowing, the stooping, the lowering of one’s head—that ultimate show of respect. Children joined the procession, too, learning the naturalness of this event. A mother leaned her little girl over, holding her in her arms, to kiss Darian’s forehead.

I stood vigil, my hands folded, witnessing so much demonstrativeness. My task standing at the front was to keep the crowds focused on their job of just kissing Darian goodbye, then getting down to the basement repast.

As I fought off my emotion, a woman suddenly stepped out of line and walked up to hug me. Then, she kissed Darian and made the sign of the cross. As she walked away, I recognized her as Debbie, the grandmother and guardian of Courtney, a 21-year-old who died tragically and at whose service I’d presided.

The mourners walked downstairs to roast beef, wine, and beer—a big, fat Greek church basement feast.  Everyone wanted to speak about Darian, including his oldest son: “My father Darian said, ‘I lived on this earth as close to heaven as anyone possibly could. I married an angel. I loved my sons and my sons married angels. It’s only about this.’”

Darian’s was a world without claws. He bear-hugged his community—he was a big contributor to the annual September Greek Festival, he loved his church. He rode it hard. And it paid off.  His people returned the embrace.

This funeral was a festival of love—a big, fat love fest.

Paul Boardman is a writer and interfaith funeral chaplain and celebrant living in Seattle. He grew up in Tokyo and is a graduate of Princeton Theological Seminary. His work has been featured in The Good Men Project, Gravel, P.S. I Love You, and the ICCFA funeral trade magazine, and in the anthologies Just a Little More Time, We Came to Say, and We Came Back to Say. He is seeking a publisher for his memoir.