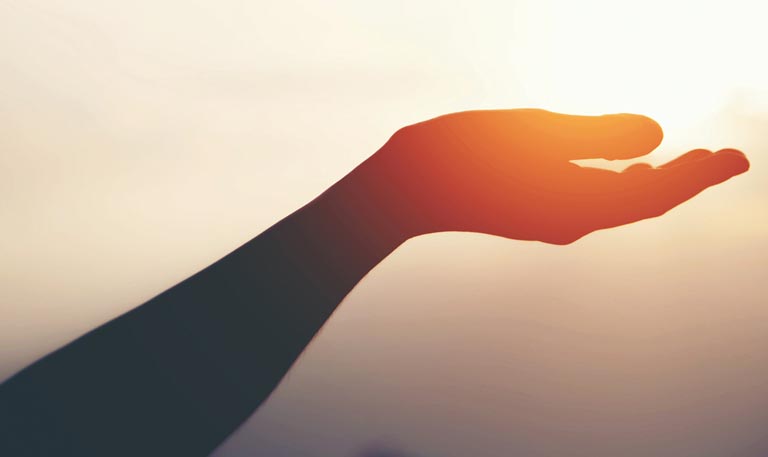 I had just started my shift at the hospital when I was paged to the intensive care unit. As I stepped out of the elevator and made my way down the hallway to the nursing station, I heard a man cry out, “Let me die! I know where I’m going and I know how to get there!”

It was Howard, a patient I’d been seeing for a couple of weeks ever since he was admitted to the intensive care unit after being flown down from Alaska on a medical transport plane with his wife Sally. Howard was in his mid-60s and had been dealing with a number of life-threatening and debilitating conditions for more than five years. His body was weakened from dozens of procedures and surgeries, and finally, his organs weren’t functioning well enough to keep him going. He was on artificial support to keep his heart pumping and his blood pressure stable. A couple of days before this they’d been informed by the medical team that there wasn’t anything more to do. That morning the palliative care doctor had met with them and talked about what it means to be put on comfort care.

In the weeks I had known Howard he’d told me about his career as a commercial pilot flying people and supplies between the far-flung villages and cities in Alaska. He shared stories of ice build-up on his plane’s wings, poorly plowed runways, and having to take off and land in the dark. As he lay flat on his back surrounded by pumps and monitors with lines inserted into his arms and drains coming out of his abdomen, unable to move except to raise his hands an inch or two, it was hard to imagine that this man had once been robust and active, canoeing and mountain climbing.

One time when Sally was out of the room Howard confided that perhaps he hadn’t been the best husband, having been gone so much of the time and always putting work first. They’d never had children of their own, which is one reason Howard said he’d been a Sunday school teacher. When asked about his religious beliefs, Howard demurred a bit before saying, “It’s not flashy, really, more of a quiet faith. I know God and I know my place in his world.”

Whenever I’m providing care to someone who is near the end of life, I try to move them to a place where they feel comfortable sharing with me their ideas about not only the meaning of life but also whether there is life after death. Howard’s “quiet faith” provided him with the assurance he would go on to a heavenly place, and even though he wasn’t quite sure what that was, he knew it would be wonderful and free from the suffering he had endured these past years.

Sally, on the other hand, was not ready to let go of her husband. It wasn’t that they had unfinished business, she just didn’t want to be left on her own. We had explored these feelings a bit but never got very far because she didn’t want to give up hope. She said, “We’ve been through rough patches before and always come out of them.” Howard knew that this time things were different, that they’d reached the end of the line, but Sally couldn’t accept that, even after their discussion with the doctor about stopping curative treatment and just doing what was necessary to keep Howard comfortable until the end came. Their differing desires that evening is what prompted Howard to yell, “Let me die! I know where I’m going, and I know how to get there!” He was tired of fighting. He was worn out from years of medical interventions. He wanted peace.

It’s been my experience in my work as a minister, either as chaplain or pastor, that people put off trying to figure out what happens after death. It’s a lot to tangle with, especially if one doesn’t subscribe to religious doctrines about salvation and life after death. And even people who state they are believers aren’t always sure of what will happen to them. Many people have said to me, “When I die everything will just go dark and that’ll be the end of it.” This is often stated with conviction, but other times in a manner more hopeful than assured. There are those, too, who have rejected the fundamental Christian faith of their childhood—one in which the concept of eternal damnation was used as means of control—but find those long-held beliefs still rising to the surface, presenting themselves as unpleasant possibilities.

But Howard knew where he was going. He also knew that his God was merciful and regardless of what he had done in his life, he was cherished and loved by God and would be provided a life after this one. He also knew how to get there. Would there be angels coming to escort him over to the other side? Did he know that he’d have to disengage from the physical reality around him in order to let go enough to begin the journey? I wish I could have talked with him about this, but there wasn’t time. He was ready to go and letting everyone know it.

Since Howard was conscious and able to make his own health care decisions, he directed the medical team to remove the artificial support so he could die. Sally was heartbroken about this but had to respect his wishes. After the nurses finished removing the lines and gave him anti-anxiety and pain meds, Howard started to relax. You could see it in his face and countenance. His death didn’t come immediately; it would take a number of hours for his body to slowly shut down, thus allowing him to leave his body.

At one point as I stood over him, I thought to myself, “Where is he going? How is he getting there?”

Stephen Sinclair lives in Seattle’s Capitol Hill neighborhood. Earlier in his life, he enjoyed a career in show business while working out of New York and Chicago. A career as an ordained Unitarian Universalist parish minister and a hospital chaplain followed. Most recently he worked with the homeless and is a weekly volunteer visitor at the Monroe Correctional Complex.