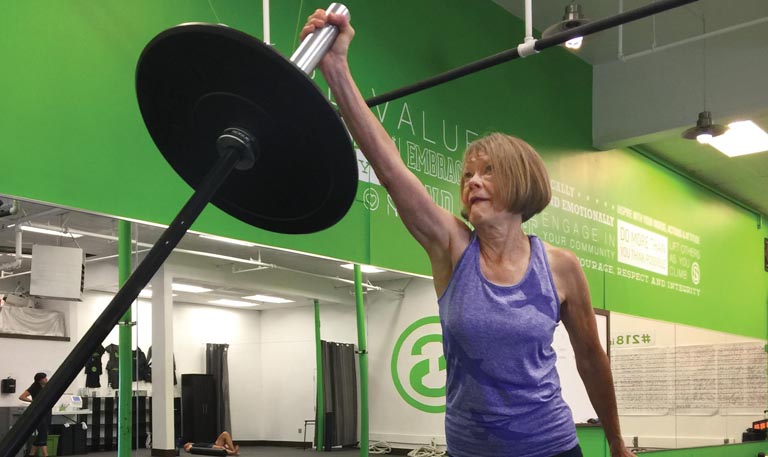 The 20-something coach of the boys crew team smiled up at me hanging 8 feet off the ground. “I sure wish my boys could see you!” she said. Me too, I thought. I might change their minds about what a 69-year-old woman can do.

My pull-ups started with a silly bet my son-in-law made with his nieces and nephews. For completing a predetermined number of pull-ups, he would pay $1,000. “How many pull-ups would your mother-in-law have to do?” I asked. After deliberation, he set the number at seven and I accepted the challenge, opening the door to an amazing experience.

Although I had never done a pull-up, I am athletic and active, despite growing up before Title IX gave more opportunities to girls. (Basketball on the strictly limited half-court did not create athletic excellence.) Over the years, I dabbled in sports, rode a bike, backpacked, and joined the dance aerobics craze of the ’80s. However, nothing pushed me to excel. I was not clear why I immediately was so “all in” to meet this challenge.

To enhance my regular exercise routine, I started working with Steve, a personal trainer. My goals were to improve my exercise form, avoid injuries, maintain flexibility and balance and, oh yes, possibly get stronger. I told Steve about the bet: do seven pull-ups using perfect form, from a dead hang with no body swing. When Steve did not even crack a smile at this aspiration, I had faith that he and I could reach my goal.

At first, I could hang from a bar for maybe a minute. From that inauspicious beginning, Steve and I launched a full-on attack. I crawled on toes and fingertips. I lifted and pushed weights and sand bags. I squatted, jumped, and lunged. It was more than just being strong; it was being efficient and coordinated. Engage your shoulders. Tighten your core. Squeeze your butt and grip that bar like you’ll break it in half. My mind had to be in the game too.

When I was finally able to pull myself up to an L-shaped bent elbow position, I got stuck—physically and mentally. I thought I would never get that first pull-up and I had no idea that each additional pull-up would be as challenging. Getting the sixth was harder than the first.  After 15 months of hard work, I couldn’t get from six to seven. Aware of my mental block, Steve told me to practice with an elastic support band instead of hanging freely and to complete three sets of 10 pull-ups every day. Of course, he knew what he was doing. Knowing that I was fixating on the number seven, he made me pass by number seven over and over again. It was brilliant. I let go of my obsession with seven. Our training sessions went on as usual, until one day Steve sent me to the pull-up bar with no instruction on how many pull-ups to do—and  I did eight. Victory!

The joy of mastering those pull-ups was one gift of the journey, but it was deeply enriched by my friendship with Steve and our teamwork. When we hugged before starting a training session, when we high-fived over a special achievement, when he laughed at my swearing in frustration, we were fully teammates. Though there is a 30-year age difference, Steve never failed to expect anything but my best, not influenced by age, but by what we had promised we would accomplish together.

Perhaps the greatest gift of the seven-pull-up challenge was to see others expand their narrow thinking about age. Every week in the gym, younger women who knew of my goal observed me. There started to be whoops of encouragement and comments of “you go girl” while I was practicing. Some would seek advice about learning to do pull-ups and what to do first. I heard myself described as a badass or an inspiration. Being a badass at nearly 70?  That is a seriously wonderful compliment.

Over the last several years I have felt myself become increasingly invisible, a common experience for aging men and women. But when I am in the gym lifting weights or training on the beach dragging a piece of driftwood through the sand or hanging from a pull-up bar at my rowing club, I am suddenly very visible. I become an inspiration and an example to others.

For me, retirement is not a time to avoid new challenges. Even as we age, we are meant to explore and move just as children do. Overcoming obstacles fires our spirit and reminds us that we are still full of potential. Fight the “easy living” temptation. Be a badass. Be a joyful badass and master your own version of the seven-pull-up challenge. There is one waiting for you.