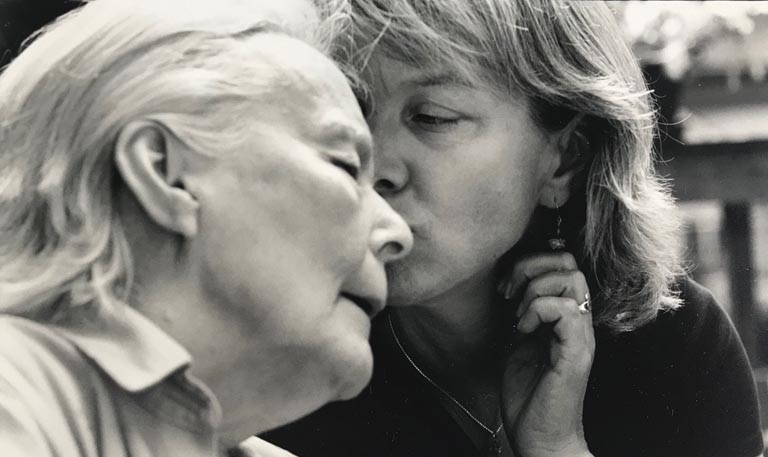 I woke up one morning thinking about Mom and her Montana childhood and her life and her Alzheimer’s disease and how our lives really are like our own personal movies that we play, rewind, edit, watch without ceasing. But life is not quite the right word. Consciousness, maybe, or soul or self—our sense of who we are—that’sthe movie. Which means our neurons are the actual film stock, the raw material on which the movie that is each one of us is recorded in our brain. So what happens when the film is damaged? Or the projector starts gobbling it up? What happens if that was the one and only print?

–from the film Quick Brown Fox: an Alzheimer’s Story, by Ann Hedreen and Rustin Thompson

My mother was diagnosed with probable Alzheimer’s disease when she was 66. She had been aware that something was wrong with her brain for at least a decade. After the diagnosis, she lived another nine years. For the last four years of her life, she spoke mostly gibberish. By the end of her life, she could not walk or feed herself.

Having to watch my mother lose her mind over the course of nearly 20 years was a chronic, torturous form of grief—one that millions of families know well, though we still have such a hard time talking about it.

And so: Do I fear Alzheimer’s? Of course I do. Every day. Yet I have spent so much time imagining what it must have been like to be my mom that I can, cautiously, say this much: For now, I am fairly sure I am not her. I am 62 years old, which means I’m right in the midst of what for her were the early-stage years of an illness that must have been terrifying, as her brain “blanked out,” as she put it, more and more often. But either I lucked out and inherited my father’s cognitive genes (he’s 85 and his brain is working pretty well), or, if Alzheimer’s is in my future, it’s not coming for me as early as it did for Mom.

I am fairly sure I am not her. Maybe that’s an odd way to phrase it. But all my life, people have told me how much I looked like my mom. And I think after a while, I began to believe that surely I must have inherited more from her than the shape of my face. Surely if she drew a card as unlucky as Alzheimer’s, then I would too.

I was 40 when she got that “probable” diagnosis. For the next decade, I felt stalked by Alzheimer’s disease. Whenever I visited Mom, I felt like Alzheimer’s rode home with me afterward in the back seat of the car. Just hanging out. Sizing me up. Waiting for me.

And though I didn’t want to imagine what Alzheimer’s must have been like for her, I did imagine it, constantly. I couldn’t help myself. Could she actually feel her brain breaking down? Especially in the early stage?

In Her Beautiful Brain, my 2014 memoir about Mom, I wrote:

The tennis ball’s coming her way and she knows she’s supposed to raise her racket and return it but she—doesn’t. The message doesn’t get from her clogged-up brain down to her arm fast enough.

Key, she says a dozen times, grab the key on your way out the door. But then the door closes behind her, locked tight, and she realizes the key is still sitting on the table, right inside.

Pine Street. Eighth and Pine. Picture the 8. Picture a pine tree. That’s where the car is. But after an hour of shopping, she can’t picture the car anywhere at all. She can’t even remember what kind of car she drives.

At 62, I have maddening moments where I can’t think of a name or a word. But then I do: 10 seconds later, or 10 minutes, or the next day. And I tell myself that, surely, those moments are nothing like what my mom was experiencing.

What scares me more is to think about what a crushing weight it must be—emotionally, spiritually—to know that you are losing your mind.

In Her Beautiful Brain, I imagined Mom just beginning to feel that weight when she was finally home, by herself, after the neurologist delivered the news:

She’s alone again, walking into her quiet, modern house with its walls of east-facing windows, hanging her jacket and silk scarf in the hall closet and going into the kitchen for… tea? Or wine?

She reaches for a glass and opens the fridge and uncorks the white wine and says to herself, Oh why not.

She sits down at the kitchen table and takes that first cold sip and looks out at the lake where, far below, a cluster of tiny sailboats is careening around in a strong wind.

“Expendable,” she says to herself. “That’s a word Dr. Forsythe would like to hear me use. ‘See, Arlene? With a vocabulary like that, you’re way ahead in this battle!’”

Was she plucky like that, when she was by herself? That’s how she was with us. If we had been there, she would have joked about how it was too bad she preferred white wine, since red was supposed to be good for your brain. She would have pointed out the boats, and reached for her camera to take a picture of them.

It’s hard to imagine her thinking of suicide. She wasn’t the type. She prided herself on her Sisu, the secret toughness possessed only by the Finnish people.

But, in that moment, did the thought cross her mind?

The sailboats are bumping into each other; a beginner’s class. Mount Rainier is in the clouds one minute, dramatically visible the next. Maybe the sailors are distracted by the mountain.

That cold wine tastes good. She pours herself another glass. After all, who’s there to see her, to watch her brain wasting away?

The smartest girl in Butte High School. She used to tell us that, proudly; now she says it to herself wistfully. Her comeuppance at last: Alzheimer’s.

She considers not answering. But then she thinks, no, I better. I hate to think the kids are going to worry even more now.

“Hello? Caroline! Hi sweetie. I’m fine. Oh, that. Well, it’s not the greatest news, is it, but at least now we all know why I’ve been so batty. A group? What sort of a group? Oh, I see, it’s more of a class. Well yes, let’s do that then. Yes, I’m putting it on my calendar now. OK, talk to you soon.”

She hangs up the phone and reaches for a pen, but the sun is just breaking over the top of one of the clouds and she has to watch it, it’s too beautiful, it’s like a Tiepolo ceiling, and by the time she reaches for her date book she’s forgotten when the class is.

It’s OK. Caroline will call and remind her.

That’s it, really, she thinks. She’s got to show that Sisu. For her kids and grandkids.

Those crazy little sailboats. She never really did understand the appeal of trying to make a boat go where you want it to by pulling this rope or that rope and hoping you’ll catch the right breeze at the right moment. Paddling a canoe, rowing a rowboat—that was more her style. Off you go, under your own steam, enjoying the view along the way instead of wrapping yourself up in a big tangle of ropes.

I’ve lived with the loss of my mom, and the fear of Alzheimer’s, for a long time now. I understand that I am stuck with this particular fear; yours may be cancer or heart disease. But I also understand fear’s value, which is to continually remind me that I have no idea what the next day or decade might hold. Therefore, now is the time for me to do all that I feel called most urgently to do.

And if I do, I hope I will face it with all the Sisu that she possessed and which, I pray, I have inherited.

Ann Hedreen is a writer, filmmaker, and the author of Her Beautiful Brain, winner of a 2016 Next Generation Indie book award. Ann and her husband, Rustin Thompson, own White Noise Productions and have made more than 150 short films and five feature documentaries together, including Quick Brown Fox: an Alzheimer’s Story. Ann has just completed a second memoir called The Observant Doubter.