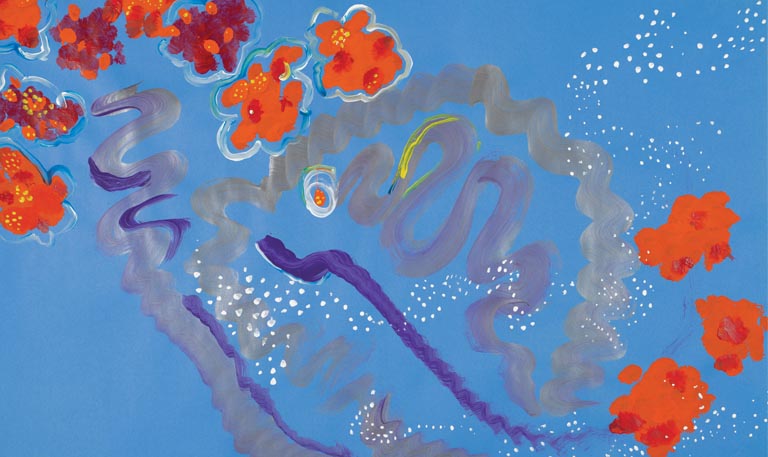 Seattle museum begins a second decade of bringing the arts to people with dementia.

Julia Blackburn has been living with Lewy body dementia since 2009. Not long after her diagnosis at age 62, she and her sister and care partner, Marybeth Blackburn, learned about a new program where people with cognitive decline and their loved one could experience art together.

The sisters had already flipped the fearful script that usually accompanies dementia. “Early on, we learned to name this new presence in our life ‘Lewy,’” Marybeth says. “By naming it, we changed the narrative. It wasn’t that Julia couldn’t remember something or do some task she had done with ease before. Nope, it was ‘Lewy.’ Naming it freed us both from the blame game of dementia and gave us a way to talk about what was happening.”

Vision loss is a hallmark of Lewy body dementia, but it didn’t stop Julia from jumping into the Creative Aging arts programs at the Frye Art Museum when they got underway in 2010. “Like so much else with dementia, it starts with saying ‘yes,’” says Marybeth. Together, the sisters took part in guided gallery viewing and art studio sessions in the Seattle museum’s here:now pilot program. And, until the pandemic, they continued to enjoy art-making experiences at Fred Lind Manor, a Seattle assisted living community where Julia lives. The sisters have come to love their “Frye Time,” no matter where it happens.

The Frye is marking a decade of its Creative Aging programs with a yearlong exhibition, Art on the Mind, which documents how the project has grown to include art experiences for people who can no longer visit the museum. Mary Jane Knecht, who manages the Creative Aging programs, says the initiative took a great leap forward in 2014 when the Frye got a two-year grant from the Institute of Museum and Library Services. With that support and additional funds from families who had experienced here:now, the Frye built its Bridges offsite program, which sends teaching artists to care centers and private homes to keep people engaged in creative arts.

“At its essence, Bridges is a transition away from the notion of ‘quality of life,’ a commonplace term in the dementia world, and toward ‘quality of experience,’” Genevieve Wanucha of the UW Medicine Memory and Brain Wellness Center wrote in a 2016 recap of Creative Aging’s first five years. When people have memory loss, they don’t lose their appreciation of beauty and meaning, nor their need for social connection—all things the Frye has been able to deliver through its art programs, dementia-friendly classic film screenings, and Alzheimer’s Café gatherings.

“We like to focus on the creative potential of the person living with dementia and catering to their different needs,” as well as those of the care partner, says Michelle Cheng, director of education and community partnerships at the Frye. That potential doesn’t go away in a pandemic, so the museum has boosted its online offerings for people to use while the museum is closed. Visit www.fryemuseum.org/creative_aging/ and look for digital resources to access easy hands-on art activities, singalong sessions, and gallery talks to enjoy at home. (Also check out the Frye’s website for news of an upcoming virtual lecture series with major national speakers on creativity and dementia care.)

The museum convenes an annual conference to gather a wide range of people who seek to explore how, in the words of 2015 conference speaker Dr. Al Power, “dementia is a shift in the way a person experiences the world.” That shift has been true for us all during the pandemic, so because the 2020 conference happened online, it could be accessed by people from all over the Northwest and beyond. Participants wrote haiku with Eddie Gonzalez of the On Being Project, virtually visited the lushly landscaped The Merwin Conservancy in Hawaii, and took a tour of utopian art projects around the world with Pam McClusky, a curator at Seattle Art Museum.

The Frye often collaborates with the UW Medicine Memory and Brain Wellness Center, and now the partners are creating the Memory Hub, which will serve as a meeting place for groups imagining new perspectives on living well with dementia. Set adjacent to the Frye on Seattle’s First Hill, the Memory Hub will feature a garden where fragrant plants may stir memories, just as art, movies, and music do.

Over the next decade, the Frye hopes to extend its reach further into rural cities and counties throughout Washington, including Jefferson County, where nearly four in 10 residents are at least 65 years old, and where the Frye already partners with the Rose Theatre and Centrum in Port Townsend.

“What’s been so clear to me is the need in more rural communities for meaningful engagement programs for older adults living with dementia,” says Knecht. “It’s exciting to go beyond the museum walls.”

Julie Fanselow is dedicated to living large with a small footprint and writing to make sense of these times. She lives in Seattle and is a frequent contributor to 3rd Act. Read more from her at surelyjoy.com.