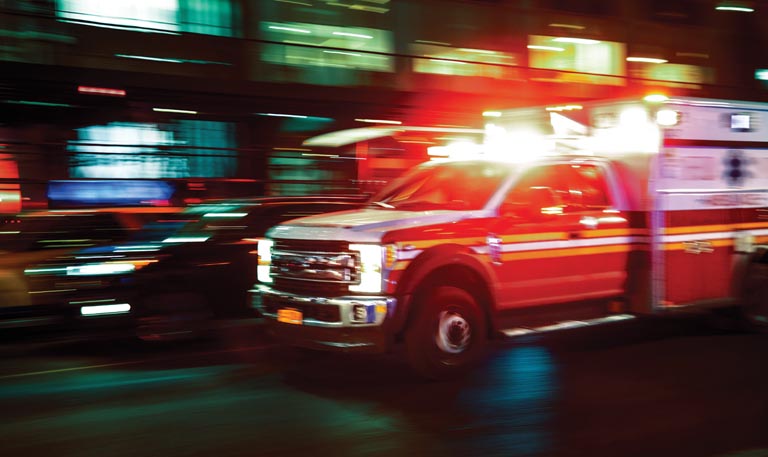 Sue had just begun her second act: quitting her CEO position to launch a new creative venture and performing around town with her jazz group. Life was great. And then, driving to a lunch meeting, she went into cardiac arrest. She crashed into parked cars.

Someone called 911. Two pedestrians pulled Sue out of her car and started CPR. Within a few minutes, Medic One arrived and took over. They started her heart again and took her to Harborview Medical Center.

Scenes like this happen in Seattle all the time. People die and are brought back to life. Bystanders know what to do. Paramedics are only minutes away. All of that is true because, just over 50 years ago, two men had a vision that it might be possible.

At that time, the majority of people who had fatal heart attacks never made it to the hospital. Dr. Leonard Cobb, a cardiologist at Harborview, believed that effective pre-hospital care would improve survival rates for cardiac patients. The question was, who would deliver that care? In 1968, he made a call to Seattle Fire Chief Gordon Vickery with an innovative idea: to put a mobile coronary care unit together, staffed by two firefighters trained as paramedics

“He took it up hook, line, and sinker,” says Dr. Cobb. “He was very enthusiastic from the beginning.”

The first class of paramedics finished training just as their vehicle was ready to go. It was a large converted mobile home, nicknamed “Moby Pig,” with respiratory equipment, medications, and a portable defibrillator on board. On March 7, 1970, Medic One headed out on its first call. They’ve been saving lives ever since, responding to 30,000 calls a year in Seattle/King County.

“We have the highest success rate in cardiac arrest in the world,” says Captain Peter Ubaldi, head of Seattle Fire Department Medic One. “People come from all over the world to see how we perform emergency medical services [EMS] in Seattle and King County.”

Medic One paramedics cover all kinds of medical emergencies, and they’ve delivered many babies. They treat trauma victims at fires, accidents, and shootings. The training program—designed, organized and brought to excellence by Dr. Michael Copass—trains paramedics from communities throughout Western Washington. Citizen CPR classes, another innovation started in 1971, have taught over 850,000 people how to give aid while waiting for medics to arrive.

Despite being successful from the beginning, Medic One’s future wasn’t always guaranteed. When the first grant money ran out in 1971, it took a tin cup, pass-the-hat grassroots effort to save it. Newspapers wrote strong editorials. Firefighters took to the streets carrying signs. PTA groups, barbershops, and bowling alleys raised money. Children sold candy at sports events. It was wildly effective. Today, property-tax levies pay for salaries, vehicles, and equipment, while the nonprofit Medic One Foundation raises money to fund the paramedic-training program and ongoing research. Medic One paramedics continue saving lives every day—and Sue is still living well.