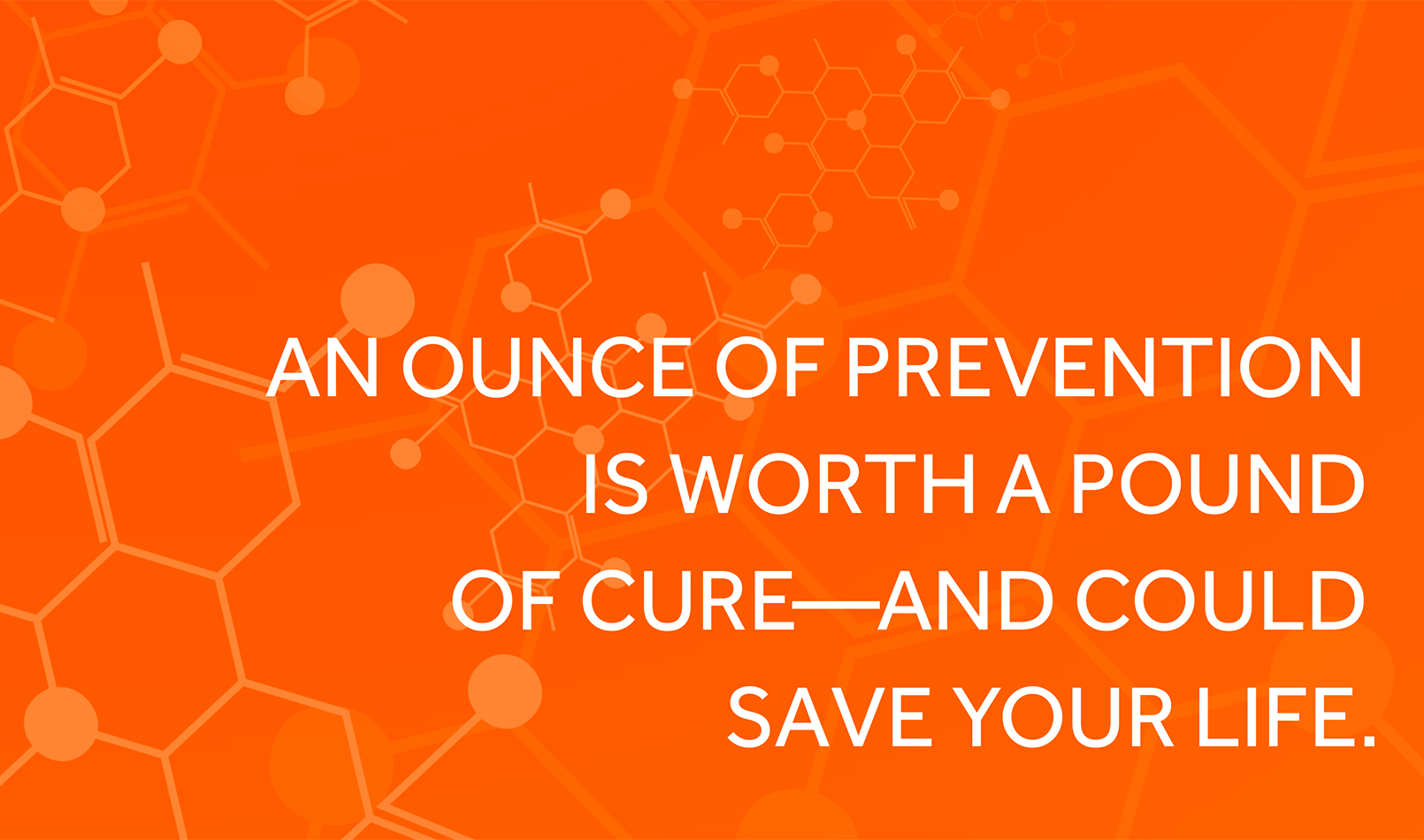 AN OUNCE OF PREVENTION IS WORTH A POUND OF CURE—AND COULD SAVE YOUR LIFE.

More than half of all colon cancer deaths could be prevented with early detection screening.
According to the American Cancer Society (ACS), colorectal cancer (often called colon cancer) is the second leading cause of cancer-related deaths in the U.S. and is expected to cause nearly 50,000 deaths during 2016. While each death brings immeasurable sorrow and loss, there is an overarching tragedy: 60% of all colon-cancer deaths in the U.S. could be prevented if everyone 50 and older were screened for colon cancer.

The risk of colorectal cancer increases with age; more than 90% of cases are diagnosed in individuals over 50. Men and women are nearly equally susceptible, with approximately one in 21 men and one in 23 women diagnosed each year. Risk factors include family history of the disease, obesity, poor diet, and unhealthy lifestyle; but even those without any risk factors can and do get colon cancer.
One of the few cancers that can be prevented through early detection screening, colorectal cancer often starts with a polyp—a small growth on the lining of the colon or rectum. Doctors can remove polyps during screening, often stopping the cancer before it can start. Polyps are common and most often are not cancerous.

Today’s screening techniques are mostly painless and are able to detect the cancer in its early stages. When caught early, colorectal cancer is highly treatable. Those who have polyps or early-stage colorectal cancer usually don’t have symptoms, especially at first. So don’t wait for symptoms to appear before getting screened.

The U.S. Preventive Services Task Force recommends screening for those age 50 to 75, using high sensitivity fecal occult blood testing (FOBT), sigmoidoscopy, or colonoscopy. For those at a higher risk of colon cancer—due to a close relative having colon cancer, having inflammatory bowel disease or a genetic colon disorder—screening may start sooner.

In Anacortes, Island Hospital’s cancer program recently conducted a study to determine the late-stage and metastatic (when cancer cells have migrated to another part of the body) colorectal cancer incidence rate for the years 2009 through 2013. The study showed 47% of patients diagnosed with colon cancer had late stage or metastatic disease.

The ACS estimates that nearly 135,000 new cases of colorectal cancer will be diagnosed in the U.S. in 2016. This number could rapidly decrease in coming years if more diagnoses are made at an earlier stage, when treatment is less challenging.
For more about colorectal or other cancer-related topics, visit the ACS website at www.cancer.org.

• Fecal occult blood testing tests stool samples for hidden blood, which can be a sign of growths within the colon. It is recommended annually, or every three years if done in combination with a sigmoidoscopy. The procedure consists of collecting small stool samples at home, then mailing them to a lab for testing.

• Flexible sigmoidoscopy is used to look for growths or cancer in the lower colon. This test is recommended once every five years. A small flexible tube with a tiny camera at the end is inserted into your rectum to allow your doctor to view your rectum and lower colon.

• A Colonoscopy is a procedure that looks for growths or cancer in the entire colon, and is recommended every ten years. This procedure also uses a small flexible tube with a tiny camera.

The Merle Cancer Care Center at Island Hospital provides state-of-the-art pretreatment, staging, treatment and clinical follow-up for cancer patients. It is fully accredited by the Commission on Cancer of the American College of Surgeons. For information call 360- 299-4200 or visit www.islandhospital.org.