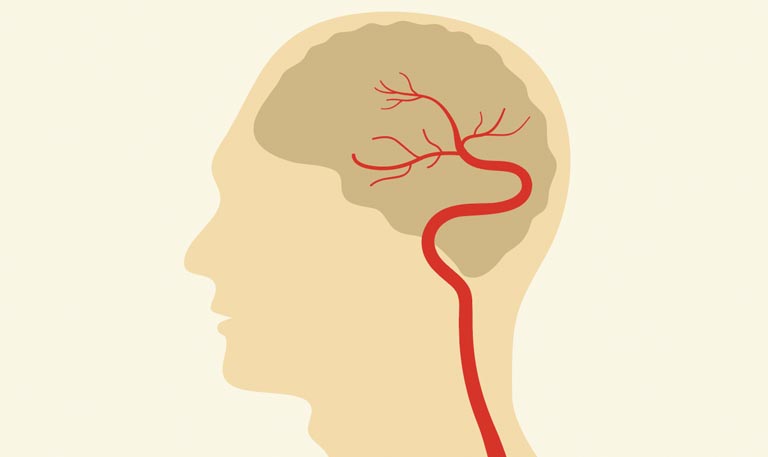 Lori got up one morning, planning to work at home, and sat down at her laptop. She couldn’t remember her password for a really long time.

“It was weird,” she remembers. “I was home with my cat and not talking to anybody, so I didn’t notice anything else that might be wrong.”

A little while later, she called me—her friend and colleague—to discuss a project. The conversation was just a tiny bit odd. Lori was using very few words, answering questions mostly with “yes” or “no,” and hesitating a bit. It wasn’t her style, but her speech was clear, not at all slurred. Then, on my last question, she said, “I don’t….know how to….answer you.”

“I felt fine, but I couldn’t get a lot of words out. I was thinking how odd it was,” Lori says. “And then my friend said, ‘I think maybe you’re having a stroke.’” As it turned out, she was. An artery in her brain was blocked. By the time paramedics got her to the hospital, her speech was almost gone.

There are two major types of stroke: ischemic and hemorrhagic.

Ischemic stroke happens when an artery supplying blood to the brain becomes blocked, as happened to Lori. This is the most common, accounting for 87% of strokes. Only about 10% of ischemic stroke patients die, but they can be left with significant long-term disability.

Getting treatment quickly has a strong impact on recovery. Clot buster medication tPA can be given intravenously within four to five hours of the stroke. It requires a CT scan first. “You can even get it in small hospitals without neurologic expertise, because they can use Telestroke to reach somewhere that has a comprehensive stroke center,” says Dr. David Tirschwell from UW Medicine Stroke Center. Telestroke is a system connecting local emergency room doctors with stroke experts in another location.

Mechanical thrombectomy is an effective treatment for patients with a blockage in one of the large main vessels of the brain. The window for this can be up to 24 hours, says Tirschwell, but earlier is better. A catheter, threaded through the femoral artery up to the brain, pulls out the clot with either suction or a stent retriever. Not all hospitals are able to do this procedure; in Seattle, for example, only Harborview, Swedish Cherry Hill, and Virginia Mason can do it.

A hemorrhagic stroke is due to bleeding into the brain (intercerebral) or around the brain (subarachnoid) when a weakened blood vessel ruptures due to an aneurysm or an arteriovenous malformation (AVM). These are life-threatening strokes.

Dan Parker, 67, was at work when an aneurysm in his brain ruptured. An aneurysm is a ballooning out of the artery wall, which generally goes unnoticed until it bursts and causes a bleed. Fortunately, he wasn’t home alone.

“I didn’t know what was happening to me,” says Dan. “There was pain in the back of my head. They stuck me on a helicopter and there was a neurosurgeon standing by at the hospital.”

Dan survived and began physical, occupational, and speech therapy. Unfortunately, though, his surgeon had discovered a second aneurysm in his brain during that first surgery, and another procedure was scheduled to clip it. Clipping involves sealing off the neck of the aneurysm so that blood can’t enter it. Although the procedure worked, Dan had a stroke on the operating table and woke up unable to talk or walk. He spent another month in rehab.

“The speech therapist would look me in the face and show me how to make sounds,” says Dan. “I spent an hour a day with him.” Dan’s right side needed a lot of work, too, and he did it. “My attitude going into this was, I want my life back.”

A transient ischemic attack (TIA), which may be called a mini-stroke or warning stroke, happens when blood supply to the brain is blocked for only a few minutes. There is no permanent damage, but a TIA is still a medical emergency. Don’t ignore it, because it may mean a full ischemic stroke is in your future.

Symptoms of stroke appear suddenly and may include weakness or numbness on one side of the body; confusion; trouble speaking or understanding language; difficulty seeing in one or both eyes; dizziness and loss of balance. Hemorrhagic stroke often causes a sudden severe headache, like nothing you’ve experienced before. There may also be nausea and vomiting.

Stroke risk factors that you can’t control include:

Ethnicity — risk is much higher for blacks than whites or Asians

“And keep them under control. It’s hugely important. If we could eliminate high blood pressure as a medical problem, half of all strokes would disappear,” says Tirschwell. A resource he recommends is the American Heart Association’s “Life’s Simple 7,” a great user-friendly guide to managing the seven risk factors for heart disease and stroke. The site includes an interactive online tool to assess your heart health, which affects your risk for stroke.

Most of recovery after a stroke happens during the first three to six months, but even after that, Tirschwell says you can still improve by continuing to work on your specific disability with your therapist, or even on your own.

It’s been a year and a half for Dan, and he feels he’s back to about 90%  of where he was before his two strokes. He still has some difficulty recalling words, and he limps a little bit. He has a positive attitude about his experience, though. “I’m a lot more sensitive to life, and every day is one more day that I have.”

Lori’s stroke was four years ago. Speech therapy helped her regain her normal speaking patterns, but it took a while. Several months after treatment, she would still sometimes have trouble finding words. Eventually, though, she felt completely back to normal.

One thing Lori learned from her experience was that a health care power of attorney is a good thing to have. It designates someone to be your representative if you are unable to communicate or to make decisions about your health care. You can have your attorney do one, or look up do-it-yourself options online.

When Lori was in the hospital, she could understand what her doctors were saying, but she couldn’t speak to them. She spoke through me; I would look at her and say what I thought she wanted, and she could nod or shake her head. I also asked a lot of questions for her and took notes, when she couldn’t, about what was going on. So now I’m her legal representative for health care decisions, should she ever need me for that again. Which, of course, I hope she doesn’t.