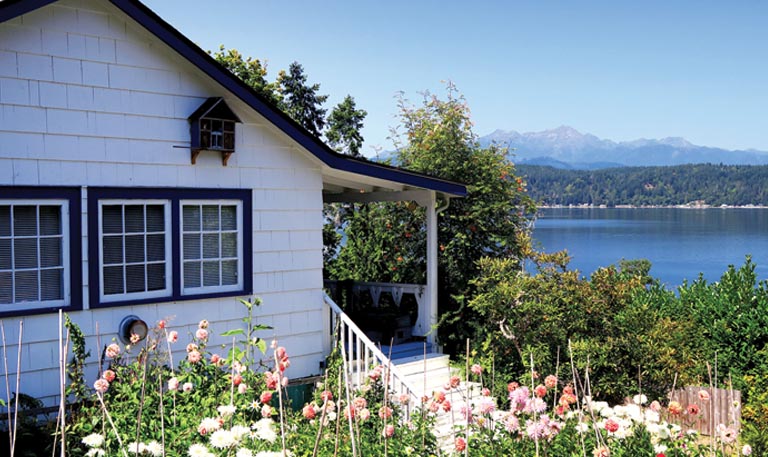 Growing up on a farm near Mount Rainier, Gretchen Schodde idolized her grandfather, whom she describes as “more Santa than Santa himself.” After he’d died of pancreatic cancer, Schodde had a chance in 1970 to visit her grandfather’s original homestead in Switzerland. As if it were yesterday, she describes the all-night train ride afterward: how she was filled with gratitude, rocked by the train, in touch with her breathing. The next morning, Schodde realized she’d felt a calling. She would create a wellness center in a beautiful place offering the sort of serenity she’d experienced on her ancestral pilgrimage.

Schodde was a young nurse at the time, still getting her career underway. She went to graduate school at the University of Washington and became part of its faculty, specializing in rural health clinics. The wellness center idea went on the back burner until Schodde, by then teaching at Tacoma Community College, wound up at a retreat at St. Andrew’s House near Union, WA, one bright winter day in 1985, with fresh snow on the Olympic mountains and sunlight dancing on Hood Canal. She knew she’d finally found the right time and place to follow her dream.

Within a year, Schodde was the caretaker of a property next to St. Andrew’s. The neighboring property soon became Harmony Hill, now a well-known retreat center that has welcomed thousands. But in the early years, Schodde made things up as she went along, whether she was seeking professional counsel or asking for donations from patrons including Bill Gates Sr. and Elmer and Kitty Nordstrom.

“I didn’t know anything about running a retreat center,” she says. “I knew a lot about nursing.” She sought advice from the International Association of Conference Center Administrators and was asked how many beds she had. “I said 10 and they laughed, and I laughed, too.” She heard she needed at least 50 beds to make a go of it. Several decades and expansions later, Harmony Hill still doesn’t have that many. But from its start, Harmony Hill offered robust programming and healthy meals served amid gorgeous views, along with gardens and trails and labyrinths to wander. When people go on retreat, Schodde says, “they’re hungry, and they’re often hungry for more than just getting away.”

Harmony Hill soon found its niche as a retreat center for people affected by cancer—not just patients, but the people who care for them, both loved ones and professional caregivers—and by 2004, those retreats were free to attend. “So many people used to come and I knew they didn’t have the resources and when I’d hear their stories, I’d say, ‘You come and we’ll find a way to make it happen,’” Schodde recalls. “Just show up.” As a survivor of non-Hodgkin’s lymphoma, she knew that the last thing cancer patients and caregivers want to do is “fill out more form when they’re already overwhelmed,” never mind come up with the money to pay yet another bill.

My husband and I were two such people, sitting in a small room at Swedish Cancer Institute in the spring of 2018. Tom had been living with multiple myeloma since 2010. His disease had been in remission nearly half a decade when the cancer came back, leading to a stem cell transplant in November 2016. Now Tom was in treatment again, and we were waiting to visit with the oncologist when we saw a flier on the wall for Harmony Hill’s first-ever stem cell transplant survivors’ retreat.

We wondered: Should we go? In one sense, Tom was certainly a survivor, far outpacing the odds on a disease with a median survival rate of about three years, and the stem cell transplant had given him another 15 months of remission. We’d hoped for more, but we decided to sign up. Our retreat was a quiet but powerful weekend of restful sleep, tasty food, gentle yoga, and heartfelt conversation. Two days at Harmony Hill helped Tom and me focus on making the most of whatever time he still had, which wound up being nine weeks. Since none of us knows how much time we have left, isn’t that reflective time worth taking, no matter what?

Schodde is feeling contemplative herself these days. It’s an exciting time for Harmony Hill, which recently hired a new executive director and is mulling ways to expand its reach throughout the Puget Sound region, all while Schodde explores what her own future holds. She has plenty she wants to do: mosaics, gardening, and leading another retreat to the Isle of Iona in Scotland, where she has been 11 times. She’d love to spend winters in the small Arizona house she inherited from her mother.

Like many people nearing a transition, she’s sorting through her stuff and thinking about where she might live. The decision gained new urgency last spring when she had a severe case of vertigo. A colleague called 911 and the local paramedics came to help the woman who’d long served beside them on the volunteer fire department. The incident got Schodde’s attention. “I’m waking up to ‘I’m 75, I have a  lot of things on my bucket list,’” she says. “I think I have more things that I want to give and that I want to experience, but I don’t know if it’s going to be here. You start realizing that there’s a time when you become more fragile.”

Schodde never married and she never had children. “I couldn’t have done this if I’d had children,” she says, referring to Harmony Hill. I suggest that Harmony Hill has in many ways been her child. “I do feel like that,” she agrees. “I want someone else to be the parent. I’d like to move into the grandparenting role. I have loved it and I’ve been so blessed and honored to be doing this work.”

Harmony Hill’s new executive director, Cheryl Sesnon, comes to the job with experience leading several other regional nonprofits including FareStart and Jubilee Women’s Center. She’s also a cancer survivor and knows that after cancer, you can either feel diminished and depleted, “or you can feel like you’re committed to life at the next level.”

Sesnon says she wasn’t actively looking for a new job, but she saw the posting “and I thought, ‘that’s the job I want. That is my future.’ There was no question in my mind.” She’d spent time at Harmony Hill and knew of its mission of helping people attain a sense of wholeness and connection. “Of course I want that for myself in my life,” she says, “but I also want to be someplace that helps other people get there regardless of what’s going on in their lives—and for many people, that’s cancer.”

Part of Harmony Hill’s magic is experiencing time and transformation in its beautiful setting, and you don’t need to have cancer to do that, since the center hosts an array of paid retreats and is available for private events. “Anybody who uses the space here for things that they’re going to do anyway,” whether team-building meetings or weddings or workshops, helps underwrite the retreats for people addressing cancer, notes Sesnon.

“Gretchen is one of the most extraordinary women I’ve ever met,” Sesnon adds. “Every time she does anything at Harmony Hill, she has in mind those people, those families, who are going through cancer and trying to navigate their way through in the best, healthiest way they can.”

In Harmony Hill’s early days, Schodde moved around the campus, at one time living in a room in what’s now the dining hall, at another time living in a trailer. (“I loved that trailer,” she says. “I’d pretend it was a sailboat. It was the best view of everything.”) But mostly she has lived at the heart of Harmony Hill in a rambling house that could help accommodate more guests. She knows it may soon be time to move on; she’s not yet sure where, though she says it won’t be too far.

Some friends recently gave Schodde a tiny house placed next to the big one where she has lived these past many years. For now, it’s a guest suite. But someday it’ll be a haven for Schodde to return on retreat, because no matter where she lives, Harmony Hill will be her spiritual home.

“The bottom line for me is how to find meaningful purpose,” she says. “How can I support this place and yet be good to myself? Stay tuned.”

Julie Fanselow lives in Seattle, writing and editing for clients including 3rd Act and Rick Steves’ Europe.Read more from her at surelyjoy.blogspot.com.