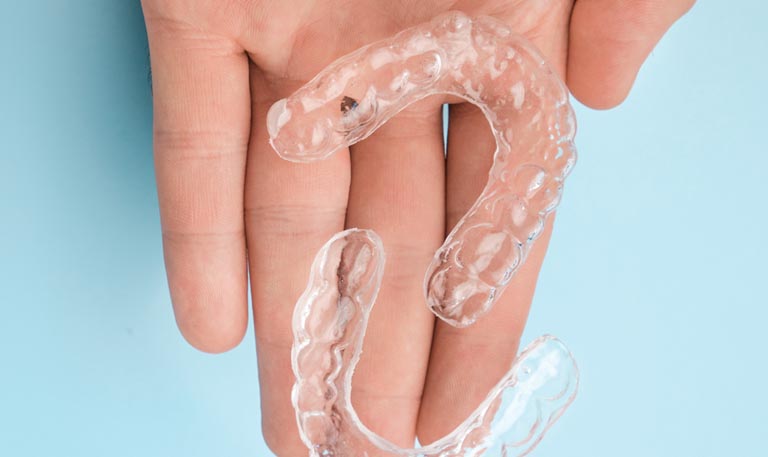 In 1970, I missed the first two classes of my junior year in high school because I was getting braces on my teeth that morning. The next day, trying to explain my absence, I struggled to speak through a painful and ugly mouthful of metal. I think I was drooling. Two years later, though, my teeth looked great. That didn’t last.

“If you want to retain post-orthodontic positioning, you need to wear some sort of retention for life. That’s a key fact,” says Seattle dentist Dr. Frank Calvo. If you don’t, he adds, “There tends to be a memory, and the teeth will migrate back to where they were.”

Dr. Calvo knows that quite well. He also wore braces as a teenager and, like most of us back then, he wasn’t told to continue using a retainer. At 62, he’s doing it all again, this time with Invisalign®. There’s no age limit on orthodontic work, and it’s not just about aesthetics.

“Everybody thinks that they just want a pretty smile,” says orthodontist Dr. Greg Vaughn. But misaligned and crowded teeth, he says, “can affect the function of your bite, the wear pattern of your teeth. It can lead to fractures, root canals, loss of teeth, and gum infections.”

In their Seattle and Bellevue orthodontic practice, Dr. Vaughn and his wife, Dr. Paola Leone, see patients ranging from five to 87 years old. “There’s no age that’s not the right age to do something that’s important for you,” says Dr. Leone.

Orthodontic treatment works by using continual pressure from braces or aligners, over time, to move teeth. Depending on the complexity of the problem to be treated, patients may choose options such as metal braces (smaller and more comfortable than in the past); ceramic, tooth-colored braces; lingual braces, which go behind the teeth; or clear aligners that go over the teeth. Invisalign®, the original clear aligner, is the most common, and there are other brands as well. The orthodontist will determine whether patients are eligible for specific options.

Dr. Leone says that most of their adult patients choose Invisalign®; It opens the door, she says, for people who didn’t want to be treated. “It’s much less intrusive for their life schedule,” says Dr. Vaughn. “There are no food restrictions, and they can take them out for a party.” Also, most people can’t tell you’re wearing them.

Key to success with Invisalign® is patient motivation and compliance. The aligners should be worn for about 22 hours a day during treatment and must be taken out to eat or to drink anything other than water. Patients need to brush and floss before putting them back in. Treatment generally takes 12 to 24 months, but it is possible to speed up the movement of teeth. At their practice, Drs. Leone and Vaughn offer photobiomodulation, which uses infrared light to facilitate bone remodeling on a molecular level. “We use it on some of our more complicated aligner treatments,” says Dr. Leone. “Patients are truly grateful for shortening treatment time.” And, she says, that helps increase compliance.

Orthodontic treatment is the centerpiece for success in both health and aesthetic results. Before doing cosmetic or restorative work such as veneers or implants, Dr. Calvo looks at the entire picture to come up with the least invasive plan. It often starts with realigning teeth, and for that, he sends patients to a specialist.

“We evaluate the current condition,” says Dr. Vaughn. “The dentist will send someone to us and we may have to do something like idealize the space so there can be implants.”

When restoration and repair are needed, it can be a team approach between orthodontists, dentists, periodontists, and endodontists. “We’re the quarterbacks,” says Dr. Vaughn. “We’re the guy who pours the foundation for the house. You don’t want to add a beautiful kitchen if the foundation isn’t right, and you can run into problems if the bite isn’t right.”

Orthodontic work can prevent costly and painful procedures later on. Kathy Herigstad, of Seattle, had some crooked teeth as a child, but her parents couldn’t afford braces. Seven years ago, at 56, her dentist expressed concern that crowded teeth were causing early signs of gum inflammation and bleeding. And that could lead to gum transplants to save her teeth.

“I didn’t care so much about the cosmetics of it, but when it started to become an issue with gum erosion, it was time,” says Herigstad. “I didn’t want to end up in the periodontist’s office and have a lot of expensive work to save my teeth.”

She chose Invisalign®. Her practitioner scanned her mouth, making a 3D impression in a digital format for a custom fit. For the next year and a half Herigstad always carried a small travel kit with a tiny toothbrush, paste, and floss. She also learned to keep her aligner case with her at all times, after wrapping the aligners in a napkin and nearly throwing them away at a restaurant. It was all part of making a commitment, she says. “When you enter into it, it’s like a marriage with your mouth.”

She spoke with a bit of a lisp at first, but after about a month, Herigstad barely noticed she was wearing the aligners. Now, at 63, her gums are safe. And the aesthetics are great, too. “It really opened up my smile more. I hadn’t realized how self-conscious I was about that overlapping and crowding of my teeth. It gives me more confidence.”

The price for orthodontic treatment can range from approximately $3,500 to as much as $9,000, depending on what needs to be done. And, interestingly, those fees haven’t increased much in decades. “My parents paid the same amount for my braces, in 1972, as my orthodontist charges now,” says Dr. Calvo.

“THERE’S NO AGE LIMIT ON ORTHODONTIC WORK, AND IT’S NOT JUST ABOUT AESTHETICS”

If you’re thinking about dental work, Dr. Calvo suggests that you look at your smile in photos, figure out what you don’t like and want to change, then ask your dentist about options. Don’t hesitate to get a second opinion.

When choosing an orthodontist, look for a practitioner who is comfortable treating older adults. Ask your dentist for a recommendation. Be prepared to commit to whatever treatment you choose, including wearing your retainer. The result will be worth it.

“It will make you look younger and healthier,” says Dr. Calvo. “And you actually are.”