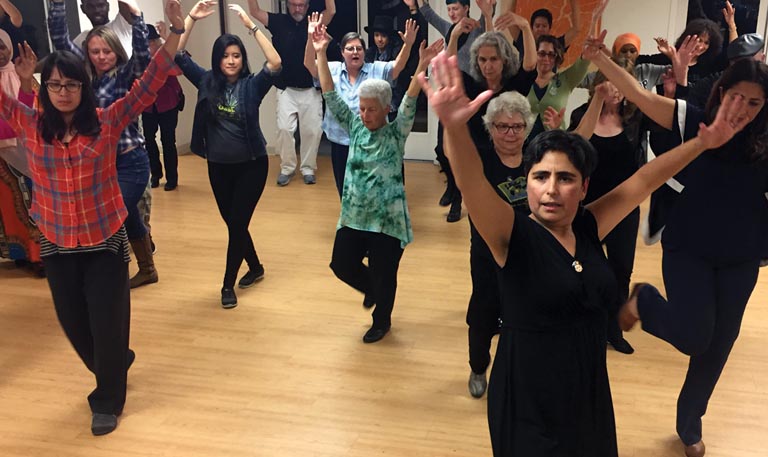 How would you like an opportunity to hear music from different countries, eat dinner, meet people from several cultures, and learn dances from around the world? Or maybe you don’t like to dance, but you’d enjoy being in a room of diverse people laughing and moving to music.

If so, make a resolution to check out the next World Dance Party, an event that happens in southeast Seattle three times a year. It’s a judgement-free evening with no agenda, no speeches, no fundraising—just a delightful mix of cultures, religions, races, generations, and genders. The official World Dance Party tagline? “Show up. Get down.”

World Dance Party is the brainchild of Vu Le, executive director of Rainier Valley Corps. At an Aging Your Way gathering in 2010, people said they wanted to get to know their neighbors. Vu knew how to accomplish that goal: share a meal and learn something new together. Through these community-led parties with potluck dinners and the chance to learn or teach dances from other cultures, a tradition was born.

There have been over 20 World Dance Parties in Seattle, and we’ve learned dances from Samoa, Ireland, West Africa, Brazil, Sweden, Israel, Spain, Ethiopia, the United States, and beyond. When we learn something new together, mistakes don’t matter.  Even if we bump into each other, we laugh it off.

Shan, one of our first DJs, says, “There is nothing better than looking out into the crowd and receiving all the smiles!” Shan helped promote the early parties by posting flyers at local businesses along Rainier Avenue and by talking to students at Rainier Beach High School. The students became dance party ambassadors, inviting friends, teachers, and neighbors. It was a hit. I even have video of a Seattle policewoman dancing the Cuban Shuffle. A few weeks later, I ran into a couple of the students. We recognized each other—I had probably stepped on their toes!— and relived the evening together. We were decades apart in age, but strangers no more.

Research shows that social engagement is the number one ingredient in healthy aging, above exercise, eating right, and even quitting smoking. We can all use more forms of self-care, and going to a World Dance Party is a successful prescription. “I’ve made new friends who are now family,” says Magnus, a volunteer instructor who taught us West African dance. Joanne, another participant, knows the parties “provide a way for older adults to give back by inspiring younger generations and showing them the meaning of community.”

If you’ve never tried Somali dance, the Somali youth will show you how. Afraid of flamenco? Just stand up and stomp away! Think you are too old for the boot scootin’ boogie? The Sliders, whose ages average 81, are your teachers.

At one party, Sabrina noticed an older woman in a wheelchair watching and smiling. “Instead of thinking, ‘she’s alone,’ I thought how wonderful she is here and wondered what she would have been doing if she hadn’t been.” Everyone is welcome: from 2 to 92, with or without walkers, strollers, or wheelchairs. No partner? No problem! Most of the dances involve the whole group and are done in circles or lines.

Vu’s original vision of getting to know neighbors has been realized: Folks report they have seen fellow dancers in line at the store or on the light rail. Tagoipah, an early co-chair, says, “The best testament to the success of these events is that they are still going seven years later.” And the events are easy to replicate. After the first six parties, the planning committee wrote a toolkit to help other neighborhoods organize. There have been at least six World Dance Parties in Shoreline, one each in Bothell, Bellevue, and Delridge—and people in other states have asked for the toolkit, too.

The parties make people feel part of community, as everyone contributes in some way to creating a positive, supportive, and inclusive evening—whether it’s bringing a dish to share, teaching dances, volunteering, or inviting friends and family. One newcomer at a party walked in the door, and within 30 seconds said, “My faith in humanity is restored!”

We are changing the world one free dance party at a time. And that is priceless.

Dori Gillamis a speaker and writer on positive aging. She’s worked for Sound Generations (a local non-profit serving older adults) and AARP. She is a speaker for Humanities Washington, facilitates Wisdom Cafes throughout King County, and is a member of the Age Friendly Seattle Task Force.

The worlddancepartyseattle.com website has a toolkit you can use to organize your own event. Look for it on the website menu. The next dance is set for 6 to 9 p.m. Feb. 15 at the Filipino Community Center, 5740 Martin Luther King Jr. Way S., Seattle. Get updates on the website or at facebook.com/worlddanceparty.