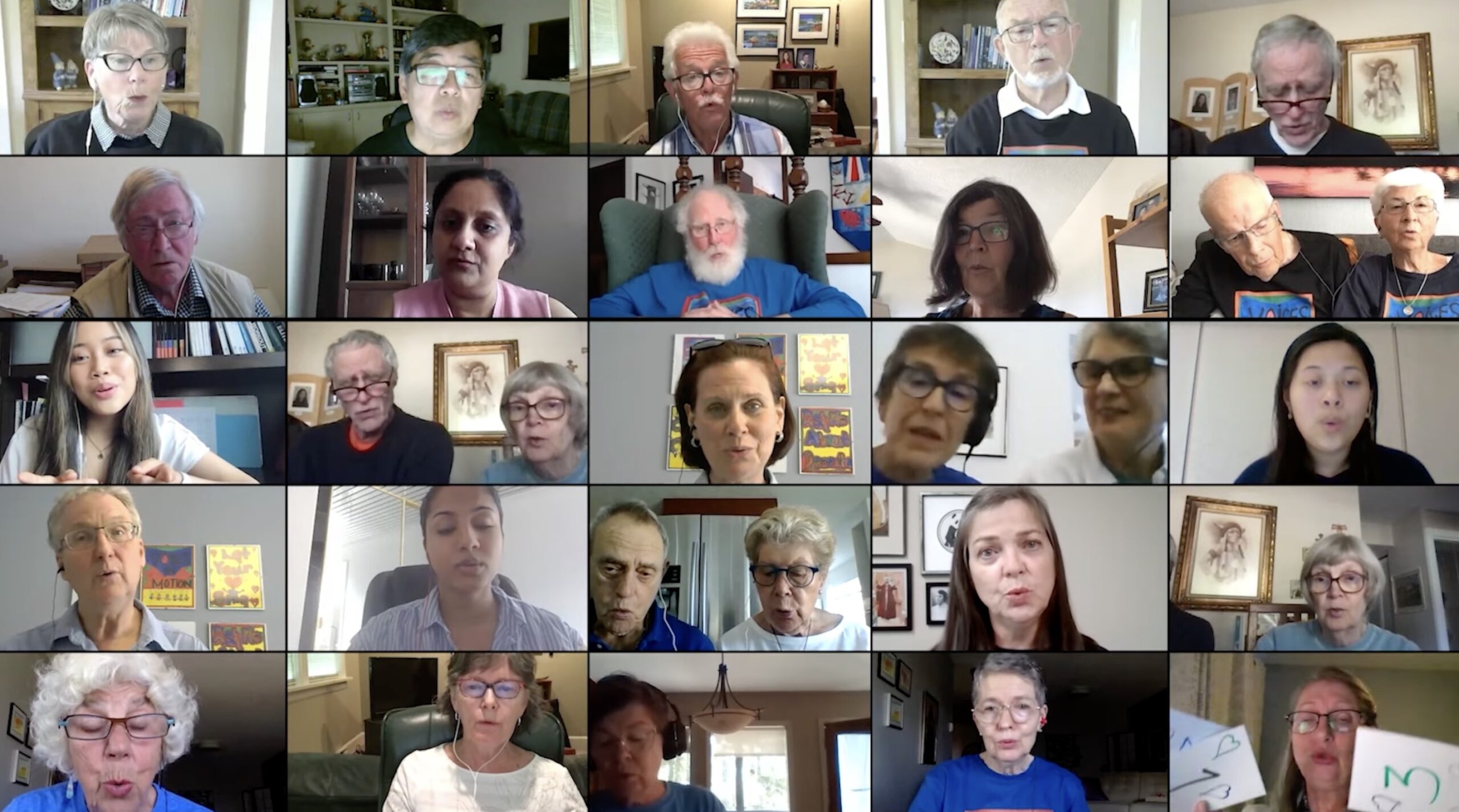 Nearly a decade ago, the documentary film Alive Inside showed how hearing beloved music from the past can bring unexpected joy to people deep in advanced stages of dementia. Now, researchers are learning how singing music with others can be a low-cost, drug-free, socially rich means of helping people with more moderate memory loss and their care partners.

Voices in Motion – based in Victoria, British Columbia – is an intergenerational choral project blending adults with memory loss and their loved ones with students. Choir director Erica Phare-Bergh builds repertoires around upbeat themes like “Living in Technicolor” and “People Who Need People.” She includes many songs from the mid-20th century that are familiar to older choir participants and which, as in the film Alive Inside, often conjure happy memories from the past. The choirs meet weekly to prepare for concerts and participants also have access to a caregiver support group and events that help people stay connected between choral seasons.

An interdisciplinary team of researchers from the University of Victoria has followed the project from its inception starting in 2018. They’ve learned that social singing has myriad benefits, from modest boosts in memory to notable improvements in quality of life, and they presented their findings at the Gerontological Society of America’s Annual Scientific Meeting Online in November 2021.

“Voices in Motion is much more than a choir and it’s much more than a clinical trial,” said Theresa Allison, professor of geriatric medicine at UC San Francisco and a trained ethnomusicologist, who reviewed the team’s work. “This is a living laboratory in which researchers, musicians, educators, volunteer high school students, and most of all care partners and people living with dementia all collaborate to produce knowledge that gives us hope.”

Researchers explained how 33 people with dementia and their care partners were measured up to 10 times during three choir seasons spanning 18 months. Researchers used the Mini Mental State Examination (MMSE, a measure of cognitive function); made assessments of participants’ mood and affect; and even measured how people walk, since gait is an indicator of central nervous system functioning. They found that cognitive functioning remained stable within choral seasons. Best of all, from season to season, participants logged a lower-than-expected rate of decline on MMSE scores: an average of 1.3 units per year, two to three times slower than typical.

“Music is a super-stimulus. It involves multiple different memory systems,” said Stuart MacDonald, a professor of psychology at the University of Victoria. Although some areas of the brain are impaired by dementia, singing uses other brain processes – including emotions and procedural memory, like learning to ride a bike – that can help people meaningfully engage in making music in a way that doesn’t tax damaged regions of the brain. Citing well-known research from Western Michigan University and elsewhere, MacDonald noted how scientists have found “that oxytocin levels – the so-called ‘cuddle chemical’ – actually as much as double while singing together in a group. This isn’t true while singing alone.”

Using a smaller sample within the choir, the University of Victoria team also measured oxygenation of the frontal cortex of the brain during social singing compared to singing alone and found that singing with others put less stress on brain processes that decline with dementia and may help preserve the neurological strengths that people with memory loss still have, according to graduate student Nicholas Tamburri. In other words, noted Dr. Allison, the research showed that group singing “provides an ideal environment in which people living with dementia can leverage their abilities rather than be limited by their cognitive disabilities.”

Many participants said music had been an important part of their lives, “that is, until symptoms of memory loss became a concern, at which point they stopped singing” in a choir, said Andre Smith, associate professor of sociology. “Typically, after the first or second choir rehearsal, these worries vanished as they realized how well they still could sing despite, in the words of one chorister, ‘having a flaky memory.’”

One participant said choir was the best experience they’d had since the outset of memory loss. Others reported feeling the music in their bodies and how singing energized them. Smith added how one participant had previously tried to play different kinds of music at home to distract her husband. That didn’t work but singing seemed to help him.

Another described the experience in spiritual terms, saying it brought her closer to God, and others appreciated the opportunity to be creative. “Given the overall benefits of choral singing in fostering a sense of community and social inclusion,” healthcare practitioners ought to suggest it to patients and their care partners, Smith said, adding that widespread implementation of dementia-friendly choirs could lead to increased well-being “and potentially delay entry into long-term care.”

Smith also cited findings that high school students, at first concerned that the people with dementia would be confused and erratic, became more comfortable around them. “One important component of our choir that is unique is the intergenerational aspect. We partnered with local high schools and that has led to wonderful friendships,” noted Debra Sheets, associate professor of nursing. Adds MacDonald, the students who took part were “introduced to the promise of a world where dementia is not stigmatized.”

Although the researchers conducted their studies in 2018-2019 before the onset of the COVID-19 pandemic, an online choir began in 2020 so people could continue singing together at a time when social isolation was growing. The online format also means that far-away family and friends can sing with their loved ones, if only over Zoom. In recent months, the online choir has continued while in-person choirs have resumed, as have performances. Concerts give a chance for the wider community to see what’s possible and serve as an equalizing experience. One participant said, “You can’t tell who has dementia and who the care partners are. We’re all the same.”

Seattle-based writer Julie Fanselow is a frequent contributor to 3rd Act. This article was written with the support of a journalism fellowship from The Gerontological Society of America, The Journalists Network on Generations, and the Silver Century Foundation.