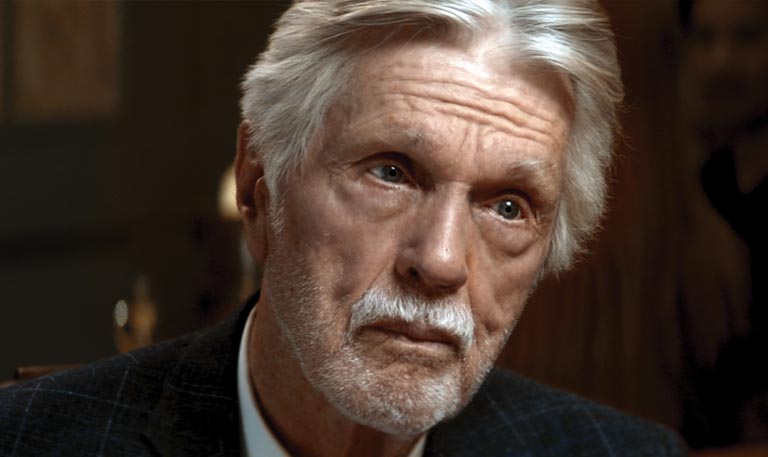 Tom Skerritt draws on a ‘library of imaginative experiences’ for his work onscreen and off.

Tom Skerritt is a leading man for the first time in his long film career, but you won’t hear him boast about that. He’d rather talk about how luck, connections, and timing led to a good living in the entertainment business, and how imagination and curiosity continue to be his touchstones for a happy life.

Instantly recognizable, yet ever relatable, Skerritt has had major supporting roles in dozens of top films and won an Emmy for the television series Picket Fences. Now, at 88, the longtime Pacific Northwest resident has done some of the best work of his career in East of the Mountains, playing retired heart surgeon Ben Givens. Widowed and diagnosed with cancer, Ben leaves Seattle for the open spaces of central Washington. That’s when things get interesting.

East of the Mountains was adapted for the screen by David Guterson, who met Skerritt when the actor invited him to lead writing workshops for veterans at Joint Base Lewis-McChord. Guterson told Skerritt that if a movie were ever made of his bestselling novel, he envisioned the actor in the lead role. The author’s casting was spot on, “one of the best performances of Skerritt’s career,” Soren Andersen wrote in the Seattle Times. Skerritt is a fan of Guterson’s work, too. “The words that he writes are often like the wind through a forest, blowing the fragrance of cedar and the rustle of leaves,” he says. “I feel that when I read his stuff.”

Interestingly, East of the Mountains is Skerritt’s second recent role playing an older man whose time may be winding down. He also commands nearly every scene in Day of Days, a little-seen 2017 movie in which he depicts a 91-year-old man who is convinced he will die by sundown. Did Skerritt consciously choose these roles? “I don’t think of them much that way,” he says.

In fact, to hear Skerritt tell it, he’s never really had a grand plan for his career. Instead, he builds and draws from what he calls “a library of imaginative experiences” and a lifetime of creative pursuits. (“I love writing, I love painting, I love carving wood—hard wood—and I love to toil in the garden,” he says.) After serving in the Air Force, he married and moved to Los Angeles, where, mostly interested in writing and directing, became an English major at UCLA. He remembers how a professor, reading his work, replied, “You’re a writer.”

“That made me feel I made the right decision,” he recalls. “But I thought if I was going to write for the screen, I had to know what it was to act. So I started doing some theater because you have to feel this stuff. You cannot explain it or fake it.” He began acting in movies because he had a family to support, and he made many good friends along the way, including Robert Redford (who decades later would direct him in A River Runs Through It) and Sydney Pollack.

He also met a TV director who gave Skerritt some work, “and one day a few years later, he calls and said, ‘I have a film to direct and I’d like you to be in it.’” The director was Robert Altman, and the film was MASH. Around the same time, Skerritt met Hal Ashby, who would soon be directing Harold & Maude. (“Talk about a film for the ages,” he says.) An actor with a bit part as a motorcycle cop broke his leg and Ashby had Skerritt fill in.

“We had all that goofy stuff going on,” Skerritt recalls. “I’m learning stuff that others are not learning and I’m with people that others are not spending time with.” Toward the end of the 70s, reluctant to commit to a small-budget film, he agreed to attend a screening of the then-unknown director’s first feature film. That’s how he met Ridley Scott and eagerly signed on for his next project, Alien. He later starred in Top Gun, directed by Scott’s brother Tony.

“All of it is a matter of survival,” says Skerritt. “All of it is to find the best of what it is that you’re given, and I was given some of the best” – including the opportunity to work with acclaimed television creator David E. Kelley, who followed up his first hit, L.A. Law, with Picket Fences. “I’ve been a very lucky man is the way I look at it,” he adds.

Through it all, Skerritt steered clear of Hollywood excess, again, because he had kids to look after amid a troubled marriage. “Acting was an avenue of release. Writing, which I’ve always been doing, is a release,” says Skerritt, who is now happily remarried and has five children, five grandchildren, and one great-grandchild born late last year.

Reviewing East of the Mountains, Lisa Kennedy of The New York Times praised Skerritt’s “unfaltering portrayal of a cardiologist who is ailing and grieving—and fed up with both.” What older person can’t identify with that at times? “Occasionally I wake up in the morning and feel that way,” Skerritt says. “Eighty-eight will do that to you.” Most days, though, he wakes up ready to live, work, and contribute.

For just as East of the Mountains ultimately shows how acts of kindness can alter life’s trajectory, Skerritt believes in mentoring others as he was mentored. He co-founded the Red Badge Project, a program that helps veterans process their traumatic experiences through writing, and he’s a big cheerleader for the region’s filmmaking community.

To that end, Skerritt and his wife Julie recently launched The EVRGRN Channel, a streaming showcase for Northwestern talent of all kinds. “It’s all uplifting. None of this ‘poor me’ stuff,” he says. Think fly fishing and classic girl bands and “great cooks that you find in the woods doing things nobody else is doing,” he says. If it’s creative, and especially if it’s positive, Tom Skerritt wants to celebrate it. “You look at this and you have a good time,” he says.

You can find The EVRGRN Channel via STIRR TV, a free streaming app. Search for Channel 343.

Julie Fanselow, a frequent contributor to 3rd Act, lives in Seattle and writes frequently about the arts. Read more from her at SurelyJoy.com.