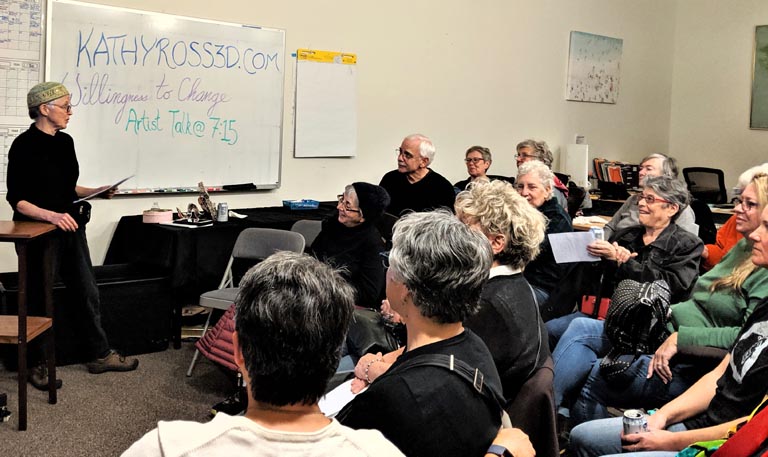 Andy Post sits on the couch, one leg tucked under the other, shoes checked at the door to the apartment on Seattle’s Capitol Hill. He’s already put out a tray of appetizers, has checked on a vegetable curry stewing in the kitchen, and is settling a bit before dinner.

Across the room sits Tom Bigelow, comfortable in a lounge chair, below a portrait of himself painted when he was a young man.

Certainly you’d earn a “good guess” if you suspected grandson and grandfather.

Friends. Simply that, and as important as that. GenFriends.

The pair are part of a pilot program launched by a group called GenPRIDE, a Seattle-based LGBTQ organization aimed with laser focus at older members of that community. Founded, officially, in 2017, GenPRIDE offers an array of programs, connections, and events for elders, recognized by many as the one group—growing rapidly—ignored in some cases and certainly isolated in many respects from what might be considered mainstream and much younger LGBTQ people, to say nothing of the older, general population.

And GenFriends? One of GenPRIDE’s efforts. It’s a concerted move to match young LGBTQ members with their elders. Tom, known as Father Tom, preaches at St. Clement’s Episcopal Church in Seattle’s Mount Baker neighborhood. Andy works in resource development for Solid Ground, a Seattle nonprofit. They’ve been friends since they first met in 2018; Andy is at Tom’s every week, fixing dinner. Sometimes friends eat with them. They will head to events together. Exactly what GenPRIDE had in mind. Friendship.

GenFriends, however, is but one of a myriad programs, events, and help that GenPRIDE offers and plans to expand in the future, according to genprideseattle.org.

The organization is on a mission—in a nutshell of its own words, to empower older LGBTQ adults to live with pride and dignity through programs and services that enhance belonging and support, eliminate discrimination, and honor the lives of older members.

A 2015 study by Aging with Pride at the University of Washington found that older LGBTQ adults “are at heightened risk of disability, poor health, mental distress, and living alone, compared to heterosexuals of similar age. LGBTQ older adults have been historically invisible and largely overlooked in aging and health and human services, policy, and research.” At that time of the study, the LGBTQ population represented about 2.4% of the older adult population in Seattle/King County. Their numbers are expected to double by 2030.

Successes? Absolutely. For years, GenPRIDE worked with eight other LGBTQ organizations and Capitol Hill Housing to finally win a City-of-Seattle OK to build an eight-story housing facility on Broadway aimed at older, low-income LGBTQ adults. The facility is expected to open in 2023.

Steven Knipp, executive director of GenPRIDE since 2018, says they have trained hundreds of people at local organizations on issues specific to LGBTQ adults. “We teach them why LGBTQ seniors come to their doors a little bit skittish and what you can do to make your facility more welcoming,” Knipp says

Thanks to a $1.4 million grant from King County, GenPRIDE is assessing area senior centers, what they’re doing (or not) for LGBTQ elders and what GenPRIDE can do to help. And that has led to another pilot program, facilitated gatherings at Ballard and Shoreline senior centers.

“Our goal is to create a core program at all of the centers, community conversations,” Knipp says. “Once we get done with this, we’ll have senior centers equipped to handle older LGBTQ adults who come into the door.”

Glenda West is a facilitator at Ballard. She’d already been involved with senior centers before she began volunteering with GenPRIDE about a year ago.

The Ballard group has a core of regulars who show up for GenPRIDE’s community conversation. (Both West and Knipp acknowledge that Ballard had a head start, which probably helped attendance. The senior center already hosts a group called Aging Ballard Lesbian Exchange, a club organized to support older lesbians in that area.) The GenPRIDE group meets monthly, with hors d’oeuvres and wine, and topics, ranging from chosen families and community to fear-of-aging and good reads.

It’s a strong start, and a reconnection of sorts for many LGBTQ adults who forged their early relationships in a common struggle for their rights. Now they have found less need for the fight, in part because of a growing acceptance of the LGBTQ community by many segments of the general population. As a result, many have lost contacts and connections.

West sees it this way: “If you looked at anything that was at one point segregated, you’re going to have the ‘yes, this is great that it’s mainstreamed.’ But what people don’t talk about is grieving the loss of the special separate parties, whatever that you had that were all your own. When you mainstream anything, that falls away. That sense of community, that unity goes away and you lose those bonds that once existed.”

And that, she says, is what re-creating community is all about.

It’s been tougher at Shoreline, says Jessi Harris, a facilitator there.

The word about LGBTQ community conversations went out last year. A gathering was scheduled. And nobody showed up. No one showed up at the next one either. Or the one after that.

So far, that’s it, and even that in fits and starts. One enthusiastic attendee came once and has not returned. Another is excited to attend but she wants the group to grow. So does Harris, “but we can’t make it bigger until people show up.”

Isolation is one problem, Harris says, there simply may not be a great number of older LGBTQ living in the area. “Shoreline has been described to me as an older community of conservative people, and a lot of LGBTQ people raised there went elsewhere to live. And they haven’t gone back.”

Still, Harris says, there’s no giving up. “We can’t let this [the Gen.PRIDE community conversations at Shoreline]die. I won’t let it die. I’m stubborn that way.”

There is a similar thread that, subtly or not, runs through practically every conversation about GenPRIDE. It will not go away. It will not die. Because it’s needed, and it’s thriving.

You need only to sit and listen to Father Tom and Andy to understand what’s at work here. What’s at stake.

Father Tom: “You don’t experience another human being for any length of time that they don’t become part of you. I will be saying things the way Andy is saying things. Part of him has rubbed off on me. His wisdom. I am better off because of it.”

Andy: “The perseverance in relationships, difficult conversations. It’s a different lens here [at Father Tom’s]. A very comfortable place to be. We’ve shared a lot of our own stories. One of the things that will be nice about this friendship is that so much of it I’ll carry with me. Most of the learning will happen after the fact.”

Steven Knipp most likely would tell you this is true in everything GenPRIDE does.

Terry Tazioli works part time at University Book Store in Seattle. He left The Seattle Times in 2008, and since then has been serving in various volunteer positions, hosted a national PBS book show called WellREAD, and writes occasional freelance articles for various publications.