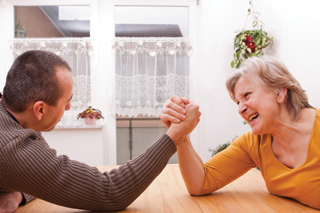 Working at a senior community, I occasionally run into situations and family dynamics that I dont quite understand.

For the most part, the families I meet are supportive of their parents decision to move to a senior community. Most are willing to help with the downsizing, organizing, and moving. Other families go a little overboard and are so determined to help, that they take control of the move until the senior feels that they dont have any control over their own situation. Frustration sets in on both sides and I find myself a mediator, trying to walk the fine line of supporting a new resident and coordinating with the family.

Then there are the families who have decided that, for whatever reason, they want no part of the move. They leave everything up to the senior, either because of time restraints, distance, or indifference. In those cases, I become somewhat of a surrogate daughter. I reaffirm their decision to move, advise as to what community life is like, assist with coordination of the move, and offer resources for downsizing, organizing, and moving.

However, the most frustrating family dynamic I have seen are the family members who bully their relative into NOT moving into a community. Their reasons are varied and puzzling, and sometimes downright disturbing. Either they dont want the work or hassle of helping with a move, or it feels they don’t want mom or dad to spend their inheritance. It is the most frustrating and aggravating situation I have experienced while working at a community. It breaks my heart to see a family member tell their mom that she can’t move to a community, when clearly she wants to make the move and desires to make life better for herself at a community.

Just recently, I made a follow-up call to a very nice lady I’ll call June, who contacted us for some information. She was very enthusiastic about the community, having heard great things about it from friends. However, she wanted to wait until her daughter returned from vacation to schedule her tour. She was excited about moving, and even wanted to leave a waitlist deposit over the phone. I thought it would be a better idea to wait until her daughter came to see the community, before she took the plunge. When I hadnt heard from her after I knew her daughter had come home, I called her. I could immediately tell by the sound of her voice, that something had changed. All she would say was, I was told I can’t move. When I asked her why, she heaved a heavy sigh and said that her daughter didn’t think it was a good idea, and that moving to a community would use up all of her money. June had mentioned in our original conversation that she wanted to move to a community, because she didn’t want to be by herself anymore, worry about cooking, cleaning, or the yard. However, in my opinion, it sounded to me like June’s daughter didnt want mom to spend the inheritance she would probably receive if mom stayed in her home.

On the other hand, I have also seen children drag their parents in to tour when they obviously don’t want to be here. They are clearly not ready, mentally or emotionally to tour, let alone move. Its very clear that the family had not discussed the move with the parents before the trip to the community. The adult children thought they would just take their parent to a community and, like magic, they would think its a wonderful idea and start packing. The children are most likely feeling guilty and put-upon, so they think moving their relative to a community where they can be looked after will solve everything. That way they can continue living as usual, knowing that if anything were to happen, their relative would be in a community looked after. They can rest assure that if something were to happen, someone else will be the first responder, not them. Sort of reminds me of boarding a dog. They don’t have a choice and they are out of the way while the family goes on vacation, or just lives their day-to-day lives.

So, in my opinion, bullying doesn’t only happen in schools these days. It can happen anywhere; the gas station, the supermarket, and yes, even in a retirement community where an adult child feels they know what is best for their parents. They don’t respect their wishes, or even take the time to discuss the situation with them. They either force them to move in, or bully them to stay out. I know there are cases where it is obvious that the senior needs to be in a retirement community, and they just wont accept it. However, those are the exceptions and hopefully they will eventually come around.

Please remember, when a senior relative decides to move to a community, there is a reason. It might be out of loneliness or fear, or they could simply just be tired of cooking and cleaning. Whatever the reason, a family needs to support that decision, help with the logistics, and respect the choice. To me, that is an important part of what family is all about.