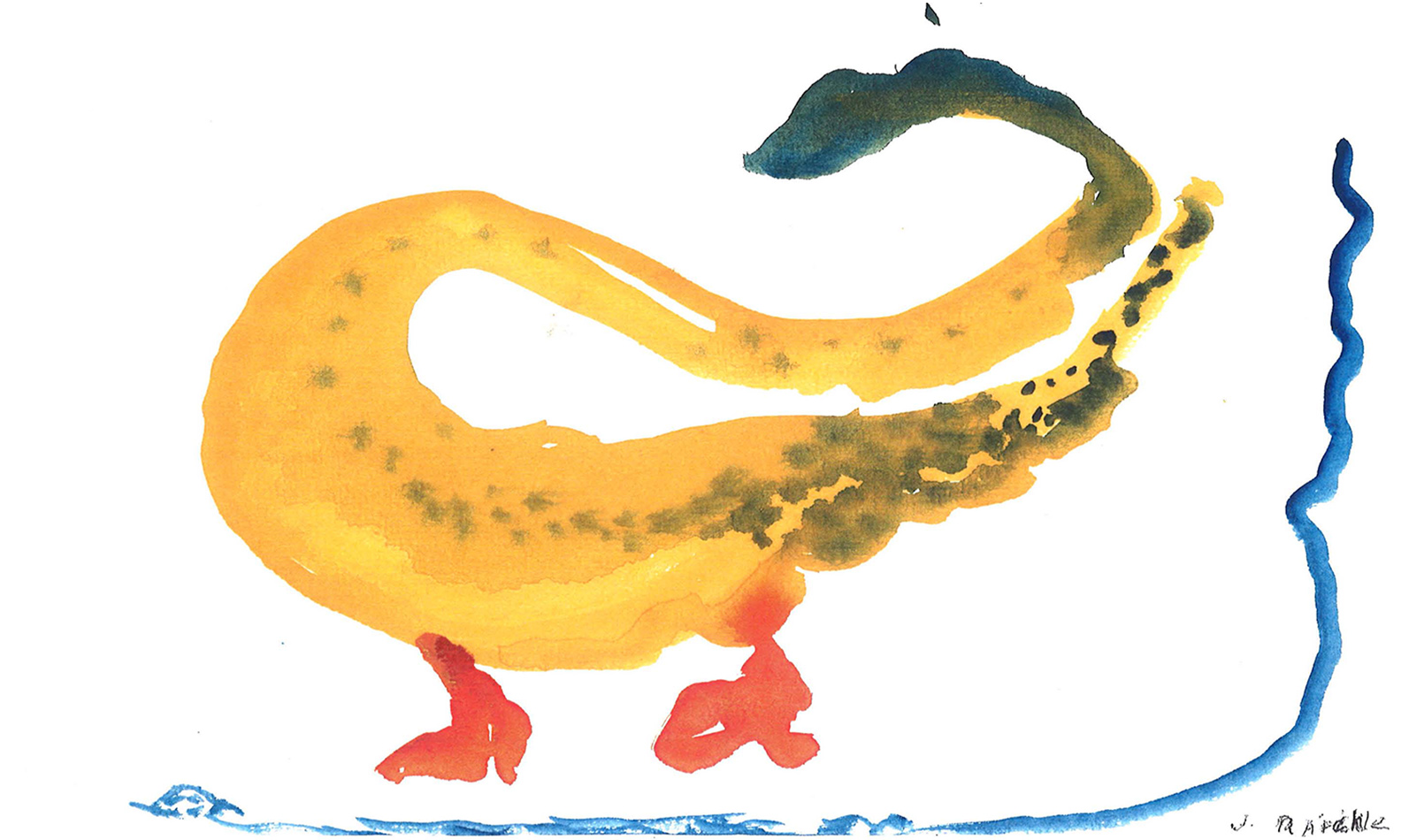 As my parents reached their mid-80’s, memory loss, Alzheimer’s and dementia emerged and began to take their toll. I found myself in the all too common position of becoming a caregiver.

Admittedly I was a reluctant caregiver. I begrudged them my time (my father could still push my buttons) and I resented the person who had “taken” my mother Jean’s place. My visits were perfunctory and I was relieved to leave. How that must have hurt.

When my father, Mom’s devoted companion of 66 years, died, we began taking her to a painting class offered by Elderwise at Horizon House. Surprisingly, her paintings were good, always interesting, and sometimes remarkable. She had never painted a day in her life but dementia seemed to silence her inner censor. The art invited me in—past pain, past denial. Each week I was eager to see what she had created and each week I marveled at their invention and wit—a window into thoughts and emotions she couldn’t express any other way.
As I spent more time with her, I began to let go of the person who used to be and embraced the person who was with me now. Thoughts of loss disappeared. I enjoyed her company and looked forward to my visits. She was still Mom, distilled to her essence.

Even better, I became a part of her new family in supported living. With Mom and her companions, I discovered the peace of the moment, relaxing in an oasis of calm in the midst of a stressful life. No worries, no deadlines, no regrets—just the moment.

I joined Mom on her daily rounds as she greeted members of the staff and residents alike with a smile and a compliment. “My but you look beautiful,” she would say. And they in turn loved her.

I slowed down and adapted to her pace. She played the piano with her own distinct medley of Silent Night morphing into Polly Waddle Doodle All Day. We played Scrabble. When she could no longer form words, we counted the score and when that was no longer possible I put the game away. She asked me the same questions over and over and it became a game for me to think up new answers which she was always eager to hear. We sang. I would start the song and she would finish. Same for nursery rhymes. We marched.

I learned the importance of touch. I began giving gentle neck massages to the ladies of Supported Living. “Heaven,” Jane would say. “Do you tuck your wings in a handkerchief when you aren’t here?” asked Gloria. Smiles all around, with each taking as much pleasure in her neighbor’s enjoyment as her own. Soon people all over the lunch room eagerly awaited their turn. What fun!

Caregiving is not always easy. My father’s experience with Alzheimer’s was far more difficult. But if I knew then what I know now, it would have been so much better. I would have realized that he was bewildered and terrified of being abandoned. I know now that I should have just been there, listening to him, sitting with him, massaging his neck, smiling, letting him know by my presence that he was not alone. That I would not leave him.

Caregiving can be a gift. Be patient, be present, and together you may find a world of mutual discovery and joy.

EXHIBIT
The Art of Alzheimer’s The Artist Within exhibit will be at Harborview Medical Center cafeteria level, March 1 to May 29, with a one-day trip to the Convention Center for an Alzheimer’s Association Conference on April 15. All or a portion of the art will be at the NW Folklife Festival at Seattle Center on Memorial Day Weekend. For full details visit theartofalzheimers.org

Marilyn Raichle has spent the better part of her career journeying between politics and the arts. She founded the Seattle International Children’s Festival, introducing children to world culture through the performing arts. She also founded American Voices, engaging people in good humored thought and action on the critical issues facing our world. Now, inspired by her mother Jean’s fascinating artwork, she has found her third act, opening hearts and minds to a compassionate and positive portrayal of people living with Alzheimer’s and dementia, replacing fear and stigma with hope and understanding and helping us all to become better stewards of our aging population.