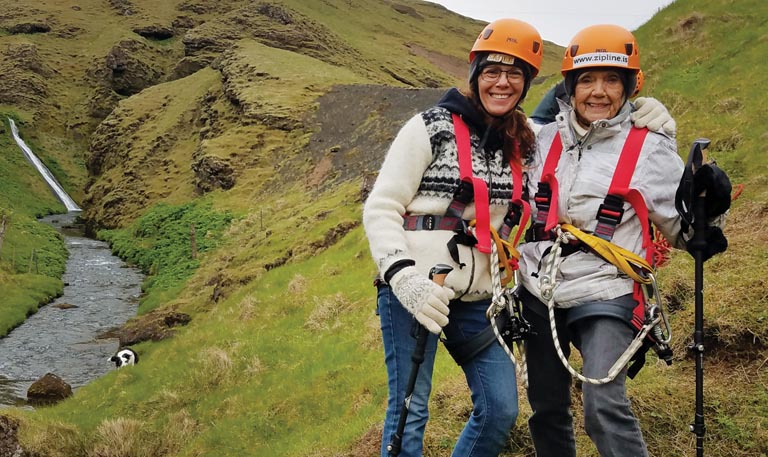 Scandinavians embrace the philosophy of less pressure, less stress, and more time for enjoying life. True to that attitude, in 2018, Heidi Herman’s 93-year-old Icelandic mother, Ieda, undertook a challenge to have 93 new experiences before her 94th birthday to prove you’re never too old for something new. Stories of Ieda’s adventures are inspiring, and spark the desire to live life with a sense of adventure. In her new book “On With the Butter! Spread More Living Onto Everyday Life, Herman taps into that desire and lays out practical strategies and resources that anyone can access to achieve more activity in our own lives. “On With the Butter!” comes from the Icelandic expression Áfram með smjörið, which means to keep moving or forge ahead. That’s the encouragement it offers through inspirational stories and useful how-to lifestyle challenges for readers in each chapter.

The chapter “Being Playful” challenges us to look at life with a fresh perspective. Here’s an excerpt:

“What does the phrase young at heart mean to you?

“For some people it means staying current with fashion trends, for others it’s about focusing on physical fitness, and for some it’s a mindset of happiness and joy. When the Chicago Tribune asked a dozen people older than sixty-three what being young at heart meant to them, their responses ranged from “a way of life that is active, hope-filled, giving and unburdened by regrets” to “living on your own terms and trying new things.” There isn’t a universal answer to the question.

“For me, being young at heart means embracing life with exuberance, being optimistic, and never being afraid to play. For children, playing is the most natural thing in the world. It’s what we did, almost unconsciously. As adults, after years of work, routine, and responsibility, we sometimes forget how to play. But even if the pure joy of having fun is a distant memory, you can choose to start playing again, right here and now. Getting older doesn’t mean we should stop having fun. We can decide to cut loose, be silly, and just live in the moment again, like we did when we were kids.

“We all have our own idea of fun, so there’s no right or wrong activity. The important thing to remember is that true play can be anything we do for the sole purpose of relaxing or having fun. Do you remember playing hand clapping games like Miss Mary Mack? Did you ever walk to the water’s edge to skip stones? Or spend hours doing tricks with a hula hoop, or jumping on a pogo stick? When we were children, these activities were part of everyday life. As adults, we often have to remind ourselves that it’s okay to play, laugh, and joke around and that, in fact, it’s healthy.

“Too often we avoid play because we’re self-conscious about looking silly, especially as we get older. But rarely if ever do we look at, say, an older couple on the dance floor and think they look silly. We’re more likely to smile and nod, thinking I want to be just like that. I’m often a vendor at Scandinavian festivals, where I have a booth with a backdrop featuring a Viking ship and a head-in-the-hole photo stand. Festival participants have photos taken with their heads on a Viking’s body, standing in front of a classic longboat. I designed it with children in mind, making sure the hole for the head was about four feet off the ground. I never imagined how many adults would jump behind the board to have a photo taken. Even though they have to squat to peer through the hole, they don’t hesitate. They’re often laughing as they finagle the awkward pose, and the pure childlike joy on the faces of people playing make-believe brings a smile to my own face every time. I’ll never forget the time an elderly woman insisted on a photo and her family members helped her from a wheelchair and supported her as I took a photo for them.

“I love knowing that playing doesn’t have an age limit. Even into her nineties, my mom followed her impulses to engage in silliness and playtime. She used to say she couldn’t be expected to act her age because she’d never been that age before and she might as well just have fun. Most people were surprised to learn her age, which could have been because of her agility and how physically active she was, but I think her constant playfulness deserved a lot of the credit.

“When she was eighty-nine, we visited an open-air museum, the Árbær in Reykjavik, and Mom remembered many of the pieces in its toy collection from her childhood. As we left the museum, she gasped and pointed to several pairs of stilts leaning against the outside wall of the building. Before I could even guess what might happen next, she rushed over, pulled a couple of them upright, and hopped up to get her right foot on the peg. Within seconds, two museum employees appeared out of thin air and supported her on both sides. They looked nervous, but she had a huge grin on her face as she took a couple of wobbly steps. The surrounding crowd didn’t concern her, and neither did the fact that she was wearing her “church clothes” and two-inch heels. Of course, people stopped to watch, but based on the big smiles on their faces, I don’t think anyone thought she was silly. I think her playfulness was heartwarming.

“We can all make time for play, with the only goal being to laugh and have fun. Don’t be afraid of letting that inner child out. If you’re out of practice, don’t worry about it—the more you play, the easier it becomes. Before long, playing will be as spontaneous as it was when you were young. Opportunities to have fun are all around us. Practice spotting the stilts in life and you’ll never be bored.”

On With the Butter! by Heidi Herman Copyright 2020. Reprinted with permission from Hekla Publishing, Cheyenne, Wyoming. Buy your copy of On with the Butter! on Amazon today to keep reading. To learn more, go to www.heidihermanauthor.com.