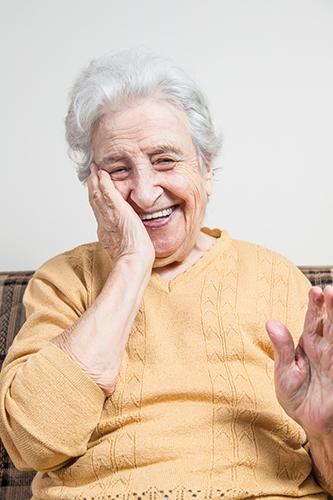 “I need to find myself again” said Meg, as we made our first connection in the retirement community where I worked. Meg, with fortitude, grace, and a smile walked in with her family: Janet, Peter and Karla, and asked to see what we had to offer. It was just weeks after her beloved husband of 57 years passed away.

Meg graciously took the offer of a wheelchair ride through the community. She needed a walker or cane due to the side effects of chemotherapy, and a ride sounded good. Right away, Meg saw the familiar face of an old friend. If this community was okay for Marge, Meg knew she could make this work. This encounter was really important to her decision to make this tremendous move in her life.

As we started to tour the community, we established an easy rapport. Meg had an openness, and eagerness that allowed her to see all of the positive aspects of the retirement community she was exploring. She was interested in everything on the calendar of activities I showed her. The highlights that helped make her decision to move into this particular community included: a swimming pool where she could do water exercises-she was an avid swimmer, a piano she could play, a small kitchen for the occasional need to be domestic, since a meal plan was provided, and people who smiled at her and made her feel welcome.

Oftentimes, people visit many retirement communities and take a few months or even years to make a decision. Not Meg! She weighed the pros and cons, and had the family support that made the transition doable. Her husband died on September 29th and she was moving into her new apartment, complete with treasures from her home, on November 10th.

Meg and her husband owned and operated a printing and stationery store in Oak Harbor on Whidbey Island, after Everett left a 22-year career in public health as Director of Environmental Health for Island County. It was here, for 12 years, that Meg learned to love learning about the lives of her Navy community customers who became friends. She did not realize it would make all the difference in being able to communicate, and relate to the many residents in her new home. Unfortunately, it was the chemicals used in the shop that created health problems for them both.

Meg had spent the 5 years before this move as caregiver, and medical advocate for her husband in their home. She had support from family and community services, but the bulk of the care and all it entailed fell upon her. As she said, You do what works for your spouse and make it happen.

In her new home she quickly learned that along with the smiles, laughter, and incredible life stories, there was compassion and empathy from women who had been through the same trauma in their lives. Meg’s positive attitude accepted their words of wisdom and coping skills, and she was then able to pass it on to new residents.

After Meg moved into her new apartment, she turned her days into an exploration of activities. She made a commitment to try something new every day. She tried Bingo, which helped her focus on numbers and chair volleyball, giving her upper body exercise and laughter. She typed song sheets in large type size for Sing-Along sessions, and an art class brought out a latent interest in sketching. She became Secretary of the Resident Council, played Scrabble with Marge, her friend from Whidbey Island, and prepared meals, which always included a different soup, salad, or menu entre! She tried everything, and stayed with what brought her joy and laughter. However, there was always time to read, plan, and remember. She thanked me often for encouraging her, and assuring her that it was okay to have alone time.

Meg e-mailed her children weekly with anecdotes about her adventures. In the meantime, they were busy downsizing her belongings, and selling the house and car. She was that committed to her new lifestyle that she was able to let go of so many things from her past life.

I enjoyed seeing Meg flourish in her new home as she reconnected with her old friend, and made new ones along the way. She always had a smile and a kind word for staff and residents alike. In the Dining Room she would approach others and join them for a meal, and when she chose a seat by herself she remained open and approachable, so that others would want to sit with her and share touching, funny, and interesting stories.

Losing control of the things you take for granted is a big issue for seniors, and when the car is no longer an option, it really feels like youre left high and dry. Meg quickly learned the community bus schedule for shopping, errands, and doctor appointments. What a relief! She also appreciated the safety features including morning check-in buttons, and secure surroundings.

Last Spring, Meg saw an ad in a local newspaper with photos of familiar faces opening a new retirement community. She continued to read articles about the new community, and then with changes and other circumstances happening where she lived, she decided to call me and check out her options. We reconnected and that relationship, once again, struck a chord in both of us and we felt that kinship. We made the tour together; she marveled at the washer and dryer in the unit, as well as the other new amenities and said, Yes! Where do I sign? This time she called her family and asked them to help her move. While it meant downsizing a little more, her daughter reminded her: Mom, its just stuff! Meg was ready to bring that positive attitude and sense of humor into a sparkling new community.

Meg says we all have some physical limitations, but they must not hold you back. She allows herself only a minute for a mini-meltdown once in a while, and then she smiles, finds someone to laugh with and appreciates being home.