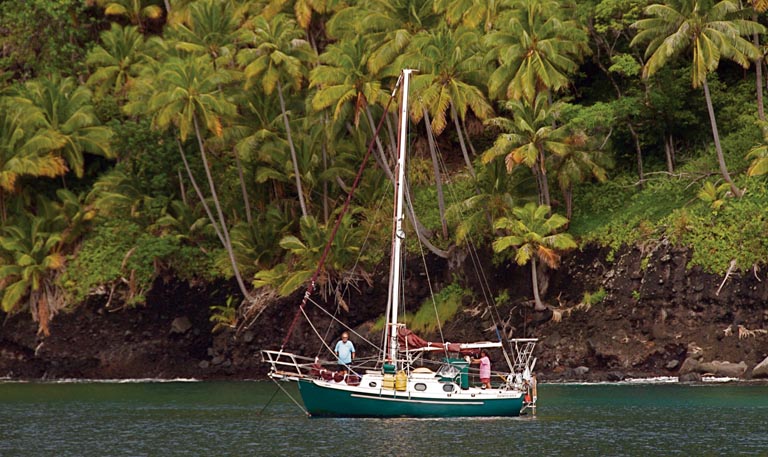 By my mid-50s I had reached a point where I was working so hard under huge stress that I was afraid of leisure, afraid it would remind me of what I didn’t want to know—that my marriage was failing. The government agency I worked for had been so eviscerated that I was secretly whistleblowing to the New York Times about the corruption. Bleakness felt more normal than joy. One day I locked eyes with a lynx perched on deep snow just outside my window and watched its furry paws splayed like snowshoes. I felt nothing. That’s when I realized it was either time to make a change in my life, or time to kill time until time killed me. Sailing dreams overtook me in the long meditative languor of 2005’s Alaskan winter.

It wasn’t always so hard, though hardship has been no stranger to me. My whole family died early; my sister in an accident, my mother two years later by suicide in her grief, and my father (later) by cancer. My first husband left me three weeks after my mother’s death and I learned what numbness piled on numbness means. So, in 1978, at age 27 I left my career as a high school science teacher and went to sea as crew on a 72-foot ketch across the Caribbean, where I found something between relief and happiness. I went on to spend the 1980s as a professional captain, but needed to make a better financial plan for my future, so I got a job with a federal agency. Then, at 55, stressed and unhappy, I retired and went to sea again, on a 24-foot sloop across the Gulf of Alaska and down the Inside Passage. It was scary and joyful and the best thing I ever did, because it prepared me for my Third Act.

I have found that going to sea opens an elegiac doorway into an unexplored chamber of the mind. It’s as if the amygdala, the brain’s center of primitive emotion, becomes mesmerized and no longer represses thought snippets, memories, and occasionally, endless annoying song fragments. There’s a tidal free flow in and out between the conscious and unconscious, until things I hadn’t remembered in years would spill out on night watches as I braced tiredly against ceaseless rolling. Oh look, what’s that thought flopping down there? Talk about unguarded moments. The sea bent me to its will through heave and toss, pitch and yaw, a form of sensory overload that when combined with an empty horizon or dark brooding mountains rising up from it, induced an altered state. I felt a nameless gate opening and would shout at the clouds and sing to the birds. For a writer, this isn’t a bad thing.

I met my now-husband in Port Townsend, Wash. We had identical boats and lots in common; we kept one boat and one house. In 2011, we sailed to Mexico, then to French Polynesia, the Cook Islands, Tonga, and New Zealand. Returning in 2013, we have since traveled up to Glacier Bay in Alaska.

There’s something about doing what you love, with a purpose. It’s balm for overwhelming times. While politicians have been arguing for centuries, and scandal and intrigue aren’t going away, bombardment by ads, sensationalized news, shouted opinion, and rude behavior assault us in ways unimaginable decades ago. I found that words well-used have the power to do some good. To me, writing equals thinking equals surviving—and helping others.

Another thing—the concept that “the world has shrunk” may be true, and the planet is far more crowded now, but it’s a costly phrase in terms of sustaining a sense of wonder. I dislike it because it implies that my horizons have shrunk.

By choosing to go sailing, I’ve reclaimed the pleasure of following a dream, the excitement of exploration, the joy of making new friends in different cultures, and the twin thrills of self-reliance and accomplishment—plus learning more viscerally how big the world really is, by crossing it slowly, at five knots. By choosing to write about this and other things, I have found an unquenchable thirst for big, full-sized days.

At sea one can empty the mind, while barely hanging onto the stomach, and watch the birds fly. “Look at that delicate petrel doing cartwheels! How is it not broken by the wind?” The albatross moves its long wings inches above wavetops and stares with soulful eyes. Off-watch in bed, ear six inches from the Pacific gurgling at the hull, one can imagine passing over billions of unseen shelled, finned, and toothed lives of which we know next to nothing. Some crawl in freezing darkness 12,000 feet down; others are near the surface. Some are large, intelligent; others invisible, microscopic, but no less alive. Some lives span whole oceans as they migrate with the seasons; other lives are confined to a drop of water.

It all feeds the sense of wonder that, at 70, will keep me going for a long time.

Karen Sullivan is a retired wildlife biologist, former ship captain, science teacher, and spokesperson for a federal agency. Aboard a 120 foot research vessel she helped do seabird research in the Aleutians and Bering Sea. From 2011-2013, she and her husband crossed the Pacific from Port Townsend, Wash., to New Zealand aboard their 24 foot sailboat. She writes for Rainshadow Journal, various magazines, and is at work on a memoir and a novel. Read more of her work at https://karenlsullivan.com.