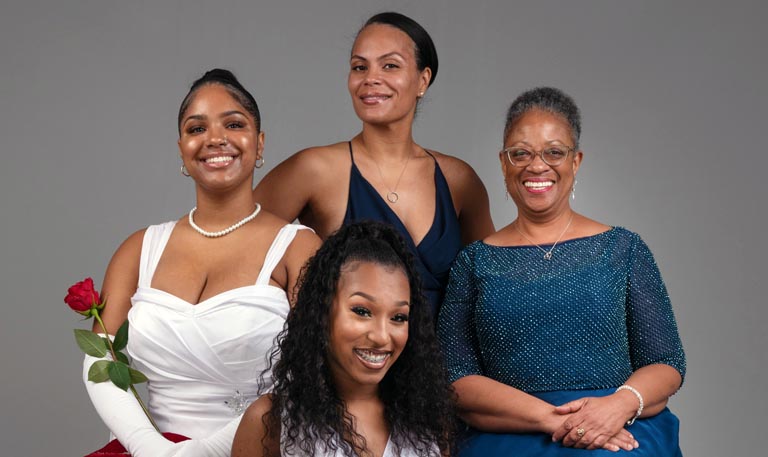 For the first time in 66 years, Washington Rhinestone Club debutantes will miss this rite of passage.

The year was 2004. I had just lost my mother the year before and it was time to launch my daughter into college. I remember how her last year of high school was chock-full of activities. Balancing work and being a mom was hard enough, but there was also her school and community service activities, church events, scholarship applications, the prom, and then graduation, followed by packing for the big move to college. It all seemed to happen so fast, but Kayla, my daughter, successfully graduated from Lakeside High School and was off to Vanderbilt University in Tennessee. All my struggles and hard work as a single parent had paid off.

The final highlight of that year happened during the Christmas holiday. It was the ceremony marking Kayla’s rite of passage to adulthood—the annual Washington Rhinestone Club (WRC) Debutante Ball where young black women currently enrolled in their first year of college are presented and applauded for their success and achievements. My heart burst with joy as her proud grandfather guided her into the ballroom. Dressed in a beautiful white gown gliding through the room as the list of her scholastic achievements and goals were announced to the audience was the high point of the year!

The Washington Rhinestone Club, Inc. was formed in 1952 to encourage and celebrate young, college-bound African-American women. The WRC achieves its mission by providing educational workshops, fundraising events (e.g., the Annual Scholarship Luncheon), college scholarship awards, and hosting an annual Debutante Ball. The first ball was in 1953 and recognized five young women for their scholastic, extracurricular activities, and community service achievements. To date, the club has debuted almost 1,000 girls at 66 annual balls. It is a tradition for many African-American families—my sister was a debutante (1969), I followed her (1976), my daughter and several of my cousins were debutantes, too.

The members of the club represent a uniquely diverse group of women from varied backgrounds and a wide age range that are passionate about the education of young Black women. At age 91, Dolores Booker is the oldest Rhinestone Club member. Originally from Atchison, Kansas, Booker moved to Seattle in 1954, armed with a degree in mathematics. She first worked at the Boeing Company as a computer engineering aide, but after four years and several blocked attempts at promotion, she decided to renew her teaching certificate and worked part-time as one of the first math teachers at the Seattle Opportunities Industrialization Center, while also teaching at Seattle Public Schools. Upon her retirement in 1997, she was the head counselor at Franklin High School.

“Being an educator all of my life, I feel it is important to promote all young people, but Blacks particularly need the support, because they may not get it from anyplace else. If you promote Blacks, who are at the bottom of the ladder, then that means everyone ahead of them will be taken care of, too,” says Booker, who joined the WRC in 1962, and remains an active member. Her daughters, stepdaughter, niece, and grand-daughter were all debutantes.

Carol Bell is the club’s current president. Born and raised in Seattle, Bell and her twin sister were raised by their grandparents. “My grandmother always told us that we would be debutantes, but I was more excited about it than my sister,” she recalls. “I looked forward to wearing the fancy white gown and being in the spotlight, and when the day finally came, we all felt beautiful, inside and out. I instilled the same message to my daughter.”

Twenty years later, Bell’s daughter, LeChaé, was queen of the ball in 2016 and is a recent graduate of St John’s University in New York.

For Bell, manager for the Seattle Municipal Court Programs and Services Division, it is important for all debutantes to feel special. “There are many things in society designed to keep you [Black girls] from dreaming big, so it is important to reinforce the message—no matter what you look like on the outside, you are dynamic on the inside and bring forth beauty,” says Bell, who tells all debs to be proud of who they are and what they bring to the table.

“The WRC strives to encourage higher education and growth while focusing on strengths and building on weaknesses so that no one feels lesser than anyone else. We strive to empower the girls through a collective experience so that they will return and want to help move the organization forward.”

Challenges Created by the Pandemic

Like many organizations, COVID-19 has thrown a wrench into annual plans and traditions. For the first time in 66 years, the club was not able to host its annual scholarship luncheon fundraiser and will be unable to afford a ball, and scholarships, for this year’s 12 enrolled debs.

“The WRC events (luncheon and balls) have been a big part of my life for years,” recalls Booker. “Although I feel very badly, we cannot have our events this year, I understand why.”

Although the WRC struggles with balancing and modifying plans, Bell remains optimistic and hopes to combine the 2020 and 2021 balls. “These girls are our future leaders,” she says. “They are the ones with opportunities to correct the injustices we deal with today.”

When asked about her vision for the club’s future, Bell says that she would like the WRC to expand and build sustainable relationships throughout the community so that people feel they are investing in the future of young, professional Black women.

Karen Winston is a planner at the Seattle Human Services Department, Aging and Disability Services Division.

Help the Legacy Live On

Will the pandemic be under control by June 2021? That is when the Washington Rhinestone Club hopes to host its next scholarship luncheon. This event is critical for raising the scholarship awards presented at the ball. Traditionally, only the queen and runner-up receive awards based on the highest GPAs, but in recent years the club has strived to support all debutantes in their college endeavors. Not being able to hold the luncheon has had a tremendous financial impact on the organization. Like many nonprofits, the club is hoping for more support and donations from the greater community so that the legacy will live on. Donations to the nonprofit club (federal tax ID #27-0038726) can be mailed to WRC, PO Box 18037, Seattle, WA, 98118. For more information, email kkwins2@comcast.net