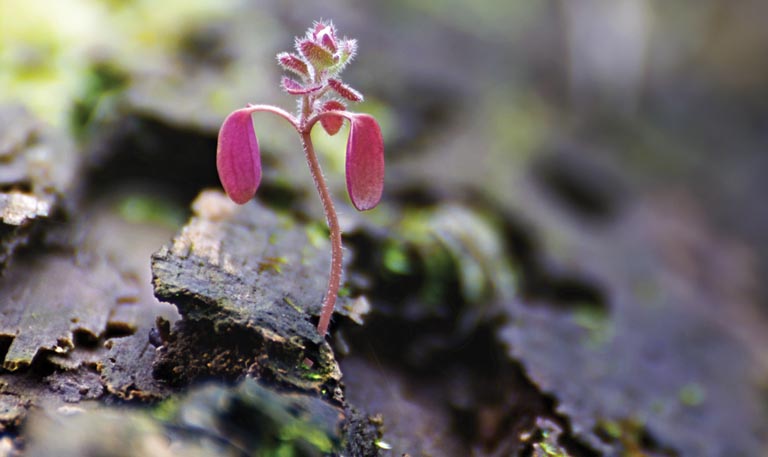 Several years ago, I almost lost my vision, and after a surgery suggestive of medieval torture, my recovery unfolded in the garden. As my eyes healed and I saw the world through double, sometimes triple, vision, to stay grounded and unafraid I immersed myself in color—the vibrancy of pending leaves (it was spring), splashes of yellow, the bursts of reds and purples. Now hard times are the norm again and it remains a privilege to have a garden to retreat to.

There are some hopeful changes in my garden of 20 years. Four peonies added to the collection, an eryngium, lovely but as yet lacking self-esteem, a smattering of vegetables, our slight nod toward self-reliance. But two changes of greater significance stand out at this time.

The first is the transformation of the Western Hemlock. Five years into the pleasures and ordeals of making the garden ours, I began to notice wedges of fungi advancing up the trunk. Initially thinking them pretty, I came to learn that such a happening indicated our tree to be infected with a rot-inducing pathogen. An arborist’s diagnosis confirmed a 75% infestation and it was declared a hazard. We opted not to cut it down, but rather limb and top it, chiseling what remained with a chain saw so that it would mimic a natural demise. For many years, it would house squirrels and flickers and more life than the eye could see.

Last September, it fell over silently and politely, positioning itself between a large container and a lamp post. Its evolution—from graceful, mature tree to rough, dynamic snag to fallen, rotting log—suggested a bit of the life of a forest in our small back yard.

Standing, the snag invited observation, as mysteries in the garden are wont to do. What would it support as a ruin? Two flickers explored the potential and progressed comfortably from courtship to nesting to brooding. Finally, we heard babies, a sustained murmuring, which rose over a brief time, to the Chorus of Adamant Demand.

And one day, they were gone. No lead-up. No witnessing of the chicks’ first flights. Simply gone. And then, another morning, I gazed blankly at anomalous, scattered piles and cried out as they snapped into focus. Flicker feathers. Carefully, they were gathered up, brought into the house, sequestered somewhere. But we had loved the flicker family and that our snag had been so well used.

And the second? Noticing an intoxicating fragrance on my early morning rounds, I allowed my nose to lead me back to Miss Kim, the Korean lilac. I was especially pleased to see her in full bloom, because last year, at the height of summer, she had succumbed to a bacterial blight. I gave what care I could—raked up the infected leaves, withheld water, monitored. And now here was Miss Kim with fragrant blooms and healthy leaves; grateful. But something else caught my eye. It could not have failed to, as it loomed above Miss Kim. That pile of leaves, gathering itself, last spring, into a pulsing mound, had exploded into eight towering spikes—foxglove—the tallest at 6 feet. The spikes were a mass of white, tube-like flowers, freckled inside. I was impressed as this uninvited guest had planted itself beside Miss Kim and they looked convivial together.

Foxglove and Kim look a little less fresh today. Her blooms have faded to a dirty cream and there is no more fragrance. The foxglove has broken two spikes and the leaves are tawdry and spotted here and there. I wish it could all stay perfect forever.

Does any gardener not inflict on their plants names and personalities, imagined friendships, and behaviors? I accept the invitation to look deeply and extrapolate. “Go ahead,” I say to myself. “Make it personal.”

A practicing Buddhist for more than 30 years, Hollis Giammatteo has sought experiences that challenge her practice, from teaching writing to working with the elderly. She co-founded The Wilma Theater in Philadelphia and was a resident playwright for The Rhode Island Feminist Theatre. Hollis has published in a variety of magazines and her memoir, The Shelf Life of Ashes, was released in 2016 by She Writes Press.