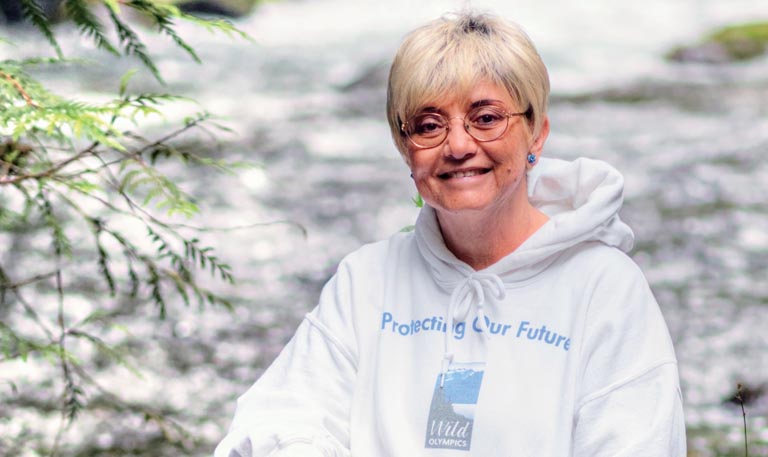 Connie Gallant likes to say she learned how to speak English by watching Bonanza. She was born in Cuba, grew up in Boston, and lived in San Diego as a young adult. But she had never seen the wild places of the West up close until the day she and her husband, JD, decided to drive up to an old lodge in the Sierra Nevada, where they had heard there were a few job openings. Gallant remembers getting out of the made-over Air Force bus that was their home-on-wheels and feeling stunned by the beauty of the snowy mountain wilderness. It was “an epiphany of sorts,” she says now.

Since that moment, more than four decades ago, her life has never been the same.

The Gallants wound up managing the lodge (now known as the Lakeshore Resort) for a year and a half before moving to Quilcene, Wash., in the northeast corner of the Olympic Peninsula. They poured their love of the DIY RV lifestyle into a nonprofit called the RV Consumer Group, whose mission is to rate RV safety and give advice to people who are shopping for RVs. This instinct for seeing problems and wanting to solve them began to spill over into their personal lives. They became volunteer monitors of the oxygen levels of Quilcene Bay and Dabob Bay, where the oyster spat industry has grown by leaps and bounds. And Connie Gallant got involved in local politics: for 20 years, she has been the democratic precinct officer for Quilcene.

But it was in 2000, when the U.S. Forest Service announced plans to log Quilcene’s beloved Mt. Walker, that Gallant became a wilderness activist. She launched a website. She got a call from the Olympic Forest Coalition, who asked her to revamp their site and, in short order, to be on their board. She made phone calls, wrote letters, arranged meetings. Turns out Gallant had a talent for getting local residents, loggers, environmentalists, and politicians to sit down and talk to each other. She persuaded then-Congressman Norm Dicks to take up the cause.

Mt. Walker was saved and the Olympic Forest Coalition—OFCO, for short—moved on to many more projects, including the most ambitious and far-reaching of them all: The Wild Olympics Wilderness and Wild & Scenic Rivers Act.

The Wild Olympics campaign was conceived in 2006, when Gallant and OFCO’s then-executive director, Bonnie Phillips, brought together some of the older, larger wilderness organizations, including the Sierra Club, the Wilderness Society, American Rivers, and the Pew Charitable Trusts to brainstorm about the need to protect the vulnerable wildlands that surround the Olympic National Park. They knew that buy-in from the timber, fishing, and tourism industries would be essential. Gallant was asked to chair the campaign and, 14 years later, she still does.

“We met year after year with folks all over the Peninsula,” says Gallant, adding that for the most part, reception to the idea was incredibly positive. “People wanted to protect this little gem in our part of the planet.” Though opponents peppered roads in the area with signs such as “Stop the Wild Olympics Land Grab,” most Olympic Peninsula residents have been supportive. Campaign coalition members now number more than 800 local businesses, conservation, sportsmen and outdoor recreation groups, local elected officials, and community leaders.

While she knew it would be a long haul she couldn’t have guessed how long.

By the time the Wild Olympics Wilderness and Wild & Scenic Rivers Act was finally introduced in Congress in late 2019, Norm Dicks had been retired for six years. As of 2013, the peninsula had a new U.S. congressman: Derek Kilmer, who grew up in Port Angeles. Kilmer had many friends in the logging industry, but he was willing to listen to what Gallant and other coalition members had to say. He was moved by her talent for bringing all parties to the table and hammering out details that made sense. No roads were closed and existing recreational uses would be allowed. The forested acres that would be protected were already off-limits to logging. The originally proposed 200,000-plus acres had been strategically trimmed to just over 126,000 acres, with portions of 19 rivers accorded wild and scenic designation. Kilmer agreed to introduce the bill in the House.

On February 12, 2020, the Act was passed by the House on a 231 to 183 vote as part of a package of bills collectively named the Protecting America’s Wilderness Act, covering 1.37 million acres in Washington, California, and Colorado.

Gallant recently quipped that if anyone had told her it would take 14 years, she “would’ve said ‘bye!”.

The next step for the Act is to be taken up by the Senate, where a companion bill was introduced last year by Senator Patty Murray. However, with all the challenges of 2020, most especially the Covid-19 pandemic, further action will probably be postponed until next year. Making the long haul that much longer.

But Senator Murray knows Gallant has no plans to give up. “Connie has been a stalwart champion for protecting Washington state’s wild spaces for current and future generations, and she is an incredible testament to the importance of women’s leadership in the conservation movement,” Murray says. “I have been proud to work with her to advance the Wild Olympics legislation, and I look forward to continuing our work together to get it over the finish line.”

Gallant finds inspiration in the stories of three women who came before her: Bonnie Phillips, her mentor at OFCO; Polly Dyer, who had a hand in dozens of wilderness victories, including the National Wilderness Act (1964) and the North Cascades National Park (1968), and was active right up to her death at 94 in 2016; and Rosalie Edge, who campaigned tirelessly in the 1930s for the creation of the Olympic National Park. According to Gallant, one of Edge’s genius ideas was to organize 3,000 local children to line the streets of Port Angeles, waving signs in support of the creation of the national park, when President Franklin Delano Roosevelt drove through in 1937.

Environmental activism is not for the faint of heart. Over the years, Gallant has been on the receiving end of many nasty letters, emails, and phone calls. Her advice to those who might wish to follow in her footsteps?

“Make sure that it’s exactly what you want to get into. That it’s a cause you feel passionate about. And make sure that you have the time allocated to it. Make sure that your spouse or mate or children, family, are OK with you spending so much time away from family activities,” she says. “Unless of course, it’s the type of activity that they’re going to be involved in. And that’s pretty cool.”

What’s next for Connie Gallant? In her final years, Polly Dyer frequently implored Gallant “not to forget” about what Dyer felt was a vitally important issue: reintroducing wolves into some of Washington’s wilderness ecosystems. Gallant, who is 72, says she promised Dyer she would try. But she would get help. Because wolf reintroduction is a cause that is definitely going to be “another long game.”

Ann Hedreen is a writer, filmmaker, and the author of Her Beautiful Brain, winner of a Next Generation Indie book award. Ann and her husband, Rustin Thompson, own White Noise Productions and have made more than 150 short films and five feature documentaries together, including Quick Brown Fox: an Alzheimer’s Story. Their latest film, set in Peru and inspired by Ann’s great-uncle, is Zona Intangible.