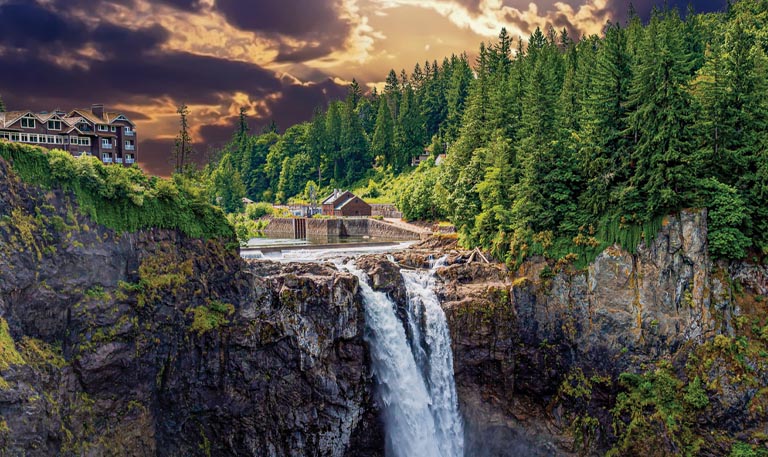 Appropriately my Cascade Valley Scenic Byway excursion launched with cherry pie and coffee at Twede’s Café (aka the Double R Diner). As fans of the 1990-91 TV show Twin Peaks can tell you, the Double R was a favorite haunt of Special Agent Dale Cooper (played by actor Kyle MacLachlan) who arrived in Twin Peaks, which was actually North Bend, Wash., to investigate the murder of the town’s homecoming queen. When the series and its (limited un) revival in 2017 made Snoqualmie Valley and its environs famous, the grateful town of North Bend declared the day of Agent Cooper’s February 24 arrival, “Twin Peaks Day.”

Bookended by Exit 31 on I-90, which skirts the North Bend Premium Outlets and Woodinville’s Highway 522—and reached after running a gauntlet of tempting wineries—the 28-mile Cascade Valley Scenic Byway meanders through bucolic rural flatlands and suburban enclaves. Offering up history, picturesque walks, winter shopping possibilities, and Christmas tree farms, your toughest decision will be which direction to drive it.

After the pie repast, I used the downloadable, self-guided North Bend Historic Walking Tour to explore. In the early 1900s the town was a stop on Sunset Highway, the cross-Cascade route predating today’s Interstate 90. Many of its historic buildings served as gas stations, hotels, and restaurants for early motorists navigating Snoqualmie Pass.

Just outside North Bend is Meadowbrook Farm, a 460-acre preserve and interpretive center with epic views of Mt. Si. Once the largest hop farm in the world, it’s also a significant site for the local Snoqualmie Tribe. A flat three-mile walk through meadows and wetlands ends at the Marie Louie Project, an art installation honoring the Snoqualmie medicine woman. Painted cedar posts mark the seasonal direction of sunrise demonstrating how the Salish calendar was oriented to natural events like the ripening of berries. If you arrive at the preserve in the early morning or twilight, you might see the elk herd that calls Meadowbrook home.

Charming Snoqualmie is rightfully famous for its railroad history. I marvelled at the outdoor museum of railway cars located next to the oldest building in town, the stately Queen Anne-style Snoqualmie Depot housing the Northwest Railway Museum. You can “Ride the Rails” on weekends taking a 5.5-mile train excursion between Snoqualmie and North Bend, or if road tripping with grandchildren, take the Santa Train in November and December. The two-hour journey begins in North Bend and ends at Snoqualmie Depot for cookies and hot chocolate with Santa and his elves.

Using the self-guided Snoqualmie Historic Walking Tour, I discovered the town’s former theater is today’s Sigillo Cellars and strolled past the building where the fraternal Modern Woodsmen of America once convened. Railroad Avenue is lined with small stores for holiday shopping, while Snoqualmie Falls Brewery makes a warm place to tuck in for a bite to eat and glass of Meadowbrook Farmhouse Ale brewed with hops grown down the road.

Snoqualmie Falls provides a jaw-dropping geology lesson about the combined effect of ice, glacial debris, a river, and a 268-foot drop over a granite cliff. The waterfall is a place of cultural importance to the Snoqualmie Tribe, and when threatened with development around the falls in 2019, they purchased the iconic Salish Lodge & Spa to preserve the site.

Enroute to Fall City, detour to Fall City Wallaby Ranch to visit their marsupials. A visit requires reservations. Park near the historic Roadhouse Restaurant & Inn to begin Fall City’s self-guided walking tour. While strolling, I learned about the valley’s first phone company operating out of the restored Prescott-Harshman House, and the town’s importance as a river transportation center. The first Saturday in December Fall City gets into the holiday spirit with a market and treelighting ceremony.

Before leaving the byway’s rural miles for the suburbs of Redmond and Woodinville, I travelled a stretch of exposed red-brick highway built in 1913, dubbed the James Mattson Road. To find this designated King County Landmark, turn right off the byway on 196th Avenue NE.

Ignoring the siren call of Redmond Town Center mall, I navigated to Woodinville where a plethora of wineries, distilleries, and brewpubs awaited. My first stop, however, was Molbak’s Garden + Home, a 60-year-old Woodinville institution. Back in the day its Danish immigrant owners, Egon and Laina Molbak, served Danish Kringle and coffee, a holiday tradition in my family. Today it brims with sights, smells, and plenty of gift and decoration inspiration.

I chose Maryhill Tasting Room & Bistro and a glass of its award-winning Cabernet Sauvignon for my final stop. Located in the Hollywood Schoolhouse, the 1912 red brick landmark, built on traditional land of the Duwamish Tribe, served first as a school, then a dance hall, and finally a roller-skating rink before its current iteration. Like the valley corridor I’d just travelled, it had a heritage best savored by making the journey there.