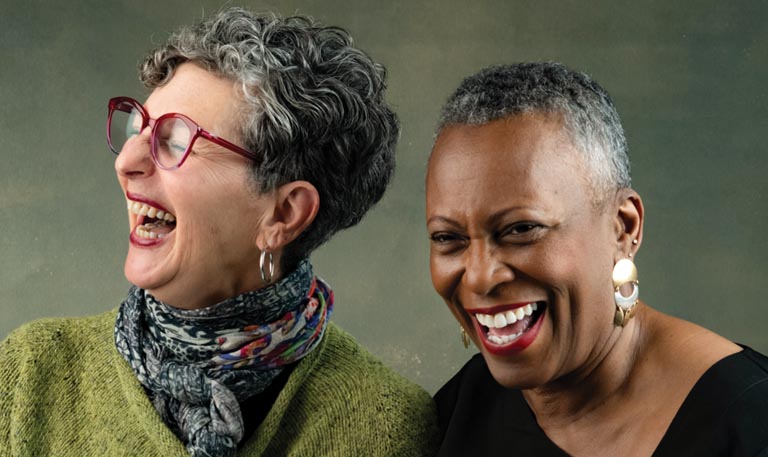 Marcie Sillman thought she had a great plan for the next phase of her life. After 35 years as a widely popular, on-air arts reporter and host for Seattle public radio station KUOW, she would head to New York City and fulfill her dream to pursue a Performance Studies graduate degree at New York University. Sillman had been accepted by the program and planned to begin a year-long academic sojourn in the Big Apple starting in fall 2020.

But months before she was due to head East, the pandemic hit. And her well-laid plan flew out the window.

Meanwhile, high-profile Seattle consultant, arts advocate, and communications specialist Vivian Phillips was ready to try something different after decades working for the Seattle Theatre Group and other local arts institutions.

In figuring out their next moves, these two dynamic women found that two minds proved to be better than one. And that was how doubleXposure, their unique podcast about the importance and meaning of the arts, came into being.

Sillman, who is 66, and Phillips, 68, had known each other professionally for decades. But they grew closer while meeting periodically as advisors to Seattle University’s three-year Arts Ecosystem Research Project.

“Our relationship developed,” recalls Phillips, “and when Marcie retired and I was free, we started talking about how much fun it would be to do something together.”

The “something” turned out to be their podcast, which launched its first season last June after months of development and design. The podcast features nationally lauded Seattle artists such as choreographer Donald Byrd, author Charles Johnson, and visual artist Barbara Earl Thomas in deep conversation with the co-hosts about many aspects of the artistic experience.

According to Phillips, “Every single person we have invited on the podcast has said yes. They are happy to talk to the two of us in their own language. There’s no filter they must go through, no second guessing of how they’ll look and be painted.”

But no matter how high-quality or interesting a podcast is, attracting an audience for one can seem daunting. According to the Podcast Insights website, currently there are roughly two million podcasts out there jostling for your attention. That is, two million series of spoken word, audio episodes, each focused on a particular topic or theme, and available through streaming apps like Apple and Spotify.

Says Phillips, “When this came up I said, ‘Oh, Marcie, doesn’t everybody have a podcast? What’s going to make us special?’ And she said, ‘We don’t have to be special, we just have to be passionate.’ And we are both passionate!”

This is a passion project because both of its producers believe fervently in the value and purpose of cultural expression. And they are eager to bring listeners closer to how the arts can reflect and enrich our society, and the inner workings of the art world.

“It’s a chance to be an advocate,” Sillman says. “It’s a passion for this cultural community and its evolution, its existence, its essentialness. That’s the crux of what we’re doing. I’ve realized more and more over the pandemic that this is what I need in my life.”

doubleXposure also provides a platform for the array of skills the women have acquired, professionally and personally. Both are assured public speakers on and off the air, for instance. “Oddly enough my career started in radio,” says Phillips. “I went to work in local Black radio at the age of 19 as traffic coordinator and continuity director, and went on the air myself in 1977.”

And Phillips brought other valuable tools, including many helpful contacts from her years fundraising and doing public relations for the Paramount Theatre, the Hansberry Project, and other organizations, and from her work as a longtime member of the Seattle Arts Commission. She also wasn’t shy about reaching out to one of her consulting clients, Pyramid Communications, for volunteer assistance.

“They put together a whole team for us, five people, who helped us with audience targeting. They created our website, our logo. That’s why you hear ‘supported by Pyramid Communications’ on our episodes.”

Though anyone can record people talking and call it a podcast, Sillman’s high standards and radio know-how also have been a boon. “When I left KUOW I knew I needed to get a digital editing system, which I bought,” she explains. “Then I signed up with a podcast host site. We record the podcast pretty much wherever we are sitting while on Zoom. And I learned a new audio system that people from the British Broadcasting Company (BBC) developed for working remotely and getting high-quality sound called Clean Feed.”

Though the podcast is not currently a money-making venture, it is surely a labor of love—reaching listeners as far as Europe and Africa. The first season of doubleXposure has featured episodes about art and science, COVID and equity, the future of live theater, and the promising research of using dance as a “healing art” with those afflicted by Parkinson’s disease.

These two dynamic women found that two minds proved to be better than one. And that was how doubleXposure, their unique podcast about the importance and meaning of the arts, came into being.

But friendship is also at the core of the project. The duo is aware that their differences in background and perspective—Silliman is white and from the Midwest, Phillips is Black and was raised in Seattle—have enhanced their bond, and their podcast.

“It’s been a really wonderful experience to have the ability to move our relationship from social/collegial, to one that is trusting and growing deeper daily,” says Phillips. “We both just summed that up as an important thing for us as we age gracefully, and reinvent ourselves, together.”

You can listen to the first season of doubleXposure podcasts by going to the series website at https://www.doublexposurepod.com.

Misha Berson writes about the arts for crosscut.com and many other media outlets, teaches for the UW Osher program, and is the author of four books, including Something’s Coming, Something Good: West Side Story and the American Imagination (Applause/Hal Leonard).