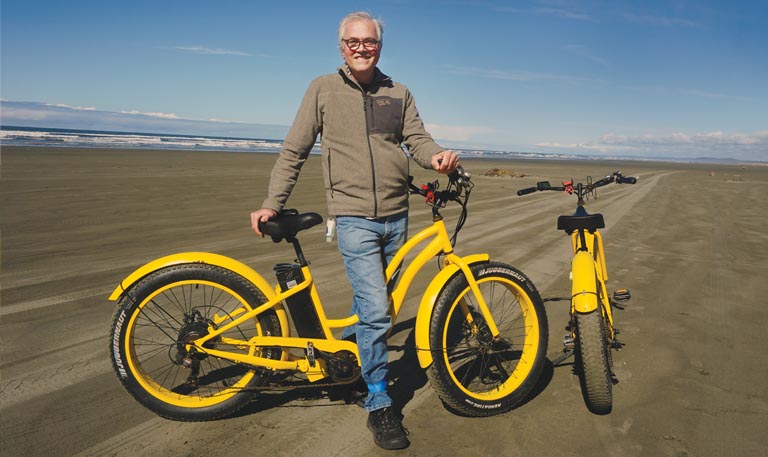 Washington Beach Towns are Ready to Welcome and Delight You.

Washington’s Scenic and Recreational Highway Act was signed into law in 1967. Today, 29 state routes have earned the designation ranging in length from 12 to 572 miles showcasing some of the most exquisite scenery and memorable cultural and historic sites the state has to offer. Over the next few issues of 3rd Act Magazine, this column will travel some of the lesser-known state scenic byways, exploring their nooks and crannies while transforming their miles into multiday road trips or Sunday drives.

Our inaugural excursion travels the land of the Quinault, Copalis, Chehalis, and Chinook people; land also serving as a flyway stop for thousands of migrating birds traveling between continents. Its communities have played host to three disparate celebrities: Pat Boone, Kurt Cobain, and John Wayne in a car-chase scene. And it contains two state parks and a pair of wildlife refuges. The 41-mile Hidden Coast Scenic Byway may be short in length, but it is surprisingly long on variety.

The route’s south terminus is the intersection of Emerson Street and U.S. Route 101 in Hoquiam. From there it heads west, then north up the coastline. First stop is the two-mile roundtrip Sandpiper Trail adjacent to Hoquiam’s westside airport. A combination of easy pavement and boardwalk leads visitors into the Grays Harbor National Wildlife Refuge, one of six major Pacific coast estuaries. While its worth a leg-stretching stroll any time, in April and from July to September, two dozen species of shorebirds visit on their annual route between Alaska and South America.

In the 1960s, speculators promoted Ocean Shores as a California style development where lots could be purchased for $595. Pat Boone was a resident, sponsoring celebrity golf tournaments on the town’s course. Kurt Cobain worked maintenance at the Polynesian Inn Resort in the mid-80s. Today the town is a pricey retirement haven and remote workplace for urban escapees with plenty to do for visitors.

As a 60’s heyday attraction, the city dredged two lakes and a linked 23-mile freshwater canal system. Those canals, now lined with homes, private docks, and criss-crossed by bridges reminiscent of Amsterdam, provide leisurely opportunities to ply the waterways in kayaks, canoes, and electric boats rented from Ocean Shores Boat House. For land exploration Electric Beach Bike Rentals offers easily rideable electric fat tire bikes and tricycles, peddle bikes, and surreys. Walkers can stroll the town’s 1.5-mile trail in Weatherwax Preserve and the beach at Damon Point State Park. Golfers can test their mettle against ocean trade winds on the 9-hole front and back course. And anyone interested in the area’s history and science can learn about it at the Coastal Interpretive Center. When hunger or thirst strikes at the end of an active day, Ocean Shores is home to Galway Bay, the Pacific Northwest’s biggest Irish pub, and Elk Head Brewery.

Driving north, resorts and campgrounds ranging from homey operations to large resorts with dining and spas front the byway. Occasionally, evergreens part for views of the Pacific and beach access turnout roads.

The walkable ocean front planned community of Seabrook has a town square of retail businesses ranging from a high-end wine store to outdoor clothing and eateries cooking up Latin cuisine and craft pizza.

Pacific Beach lays claim to the westernmost main street in the continental U.S. and a community institution, Wacky Warehouse. Wandering among the store’s boxes of used books, cassette tapes, clothes, and containers of screws and nails, you’ll discover take-home treasures and, tucked into a corner, the local radio station.

The Museum of North Beach in Moclips exhibits props from the John Wayne movie McQ, whose car chase scenes were filmed on the nearby beaches. A few miles north is Taholah’s Quinault Cultural Center and Museum, which features historical artifacts and art of the Quinault Nation. Hidden Coast Scenic Byway ends here at Cuitan Street on the banks of the Quinault River, its northern terminus on the land of the byways original inhabitants.

Ann Randall is a regular contributor to 3rd Act.  See more of her stories HERE.