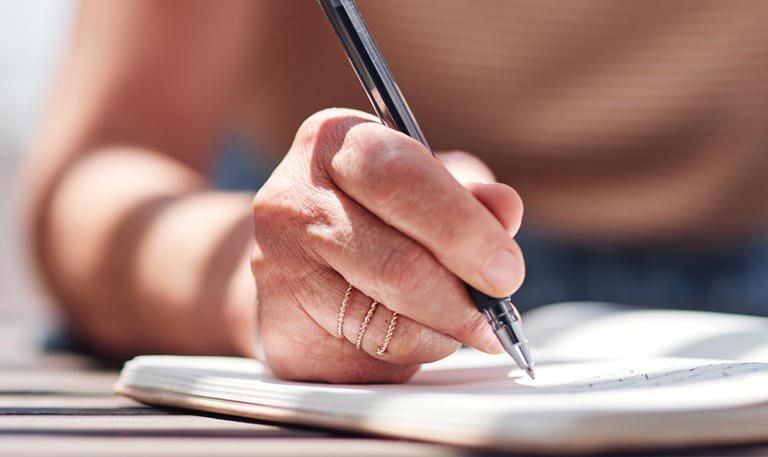 When we write, we process more than when we type.

In the present moment, it’s no less important to track those same details. There are added benefits to doing so, but it’s important to focus on the effort and method in which we observe and describe, to better understand the advantages. The activity of writing by hand can be healing, soothing, and productive, yet we must exercise our various writing muscles, like a golfer does his swing, for the practice to be effective.

In a 2014 study, “The Pen is Mightier Than the Keyboard: Advantages of Longhand over Laptop Notetaking,” by Pam A. Mueller and Daniel M. Oppenheimer, the authors state, “We show that whereas taking more notes can be beneficial, laptop note takers’ tendency to transcribe lectures verbatim rather than processing information and re-framing it in their own words is detrimental to learning.”

Today, while typing on a computer, our thoughts are interrupted by alerts to misspellings or notifications of incoming emails. We watch as our story takes shape, or we seek out poor grammar, instead of processing the information.

On paper, we have no such distractions. Our thoughts flow as fluid as a gel-tipped pen across the page, while our brains make sense of the information at hand for retrieval later.

Writing by hand also adds purpose to our days. It is an activity that isn’t related to work that takes place on a computer. I once developed a writing workshop at a nearby senior center for those who experienced cognitive impairment. Participants were invited into the world of the beach through sand, shells, and sunglasses they could touch, or we discussed baseball and ate peanuts and popcorn. They completed the sentence, “When I think of baseball, or the beach, I …” They wrote. Slowly. Or formed the occasional word. Or drew chicken scratch on paper. It didn’t matter. The exercise unearthed some memories and provided a sense of accomplishment.

Through the handwritten page, we also attach deeper meaning to a subject. Pen in hand, I pause between letters and words, reminded of my mother who did the same, despite our handwriting differing immensely. Her letters were tight and controlled. Mine exhibited occasional loops. Sometimes, I printed letters in the middle of cursive sentences, a leftover from writing computer code. The curl in my “A” was a result of copying calligraphy from the encyclopedia for a 9th-grade history project. The “J” was reminiscent of my mother’s—after we learned to forge her name on school notes.

Writing by hand is the rake that removes the leaves from behind the bushes of our experiences. It helps us evaluate our actions, process emotions, and offers a fulfilling look back on the day. While it might not always save time, the act will save our brain cells for later.

Annette Januzzi Wick is a writer, teacher, and community connector. Her Italian roots, and the combination of small-town upbringing and urban living in Ohio, inform her perspective on writing—and life. Here award-winning writings span across the arts, women’s studies, aging and memory, and politics. Visit annettejwick.com to learn more.