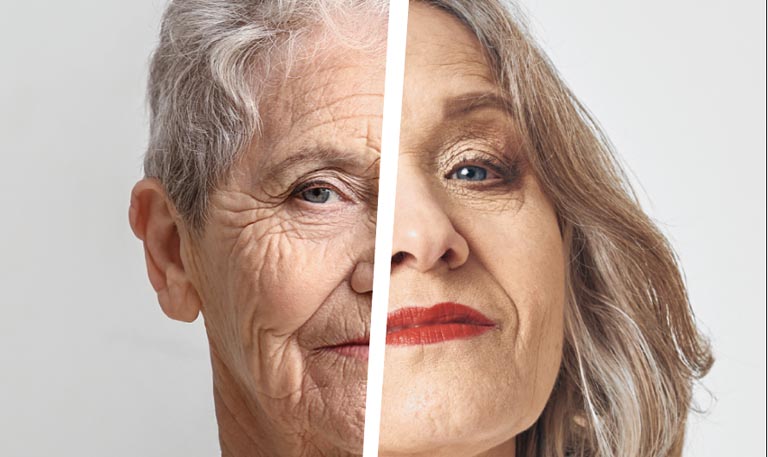 About a decade ago, at age 60, I had a rude awakening: A frail older woman sat next to me in a restaurant, and I noticed her tattered clothes and dirty hands. She ordered free samples and I felt uncomfortable. My inner dialogue went like this: “She shouldn’t be here at my favorite vegan restaurant. It’s so sad, those wrinkles, that frailty, poverty, and neediness. I’ll never be like that.”

I was meeting a hidden, unknown part of myself that was attributing to her what I was denying and rejecting in myself—my own loss of youthful vitality and potential dependency, loneliness, and poverty. In fact, I was projecting onto her a dark image of my future self and deeply disliking what I felt.

I was shocked by this new awareness, especially because I had worked and rallied against the other “isms” and stereotypes of racism, sexism, classism, and homophobia. Yet, deep in the hidden recesses of my unconscious, ageism—invisible and insidious—persisted in me.

In that moment I became aware of “the inner ageist” in myself and dubbed her “the bag lady.” She personifies the fear of losing everything, being unable to take care of oneself, and ending up abandoned on the streets. And she led me on an unanticipated journey.

With ageism, we project our negative fantasies of “old”—ugly, frail, needy, senile—that leads to condescension and stereotyping: “greedy geezer,” “old bat,” “over the hill,” “out to pasture.” And when millions of young people project what they fear about aging onto elders, the latter try to appear and to act as if they are younger. Hence, the epidemic of anti-aging marketing, advertising, surgery, and hormone replacement therapy.

I didn’t know it at the time, but “the bag lady” is an epidemic image within women in our culture. In 2016, Allianz Life Insurance Company did a survey that found that almost half of women respondents said they sometimes fear losing their money and becoming homeless, regardless of income level. So, I was not alone in carrying this hidden figure.

This new awareness led me into unknown territory and a radically new purpose. I knew that if I held dark fears beneath conscious awareness, and negative inner images of late life, others did, too. I decided to take a training to become an elder with Sage-ing International, a year-long program that proved to be a perfect fit for me in my late 60s. During this program, I found myself reorienting to the purpose of late life, as well as finding the tools to explore my own meaning for this time.

Trained as a depth psychologist to orient to the unconscious mind, I was thrilled to discover the research of Becca Levy, a psychologist at Yale School of Public Health, who has spent her career pioneering research about the unconscious operation of age stereotypes and prejudice. She has revealed how positive and negative beliefs about older people, which she calls age stereotypes, can be embodied inside of us, having profound effects on our mental and physical health.

Age stereotypes are internalized during childhood and young adulthood, and embodied when they lead to self-images. They are later reinforced throughout life by repeated exposure to ageist messaging, according to Levy. Eventually, over the years, they become “self-stereotypes,” which I call “the inner ageist.” As a therapist working with elders, I have seen how this process of internalization leads to self-hate and a merciless inner critic (“I’ve become weak, useless, worthless.”) If we assign meaning and value only to our appearance, accomplishments, physical strength, or productive roles, and they become diminished, then the inner ageist can be relentless.

Levy’s findings are startling and confirm that ageism, operating beneath conscious awareness, has ripple effects throughout our bodies and minds. She reviewed her findings in The Journals of Gerontology series (July 2003):

In 1994, in a study to see whether internalized ageist stereotypes influenced memory in older people, she developed a technique to subliminally prime participants by flashing a word on a screen so that they could see the word but not identify it consciously. Those exposed to negative stereotypes (“senile”) performed worse on memory tasks than those exposed to positive ones (“wise”). She concluded that, even outside of conscious awareness, these stereotypes can influence cognitive ability.

Levy and her colleagues tested this idea for the transition to retirement. In a study of more than 1,000 older adults, during a 23-year period, they looked at how positive and negative associations with retirement were linked to health. Those who held and embodied positive images about physical health during retirement lived 4.5 years longer than others. Those who held and embodied negative images of mental health during retirement lived 2.5 years less.

When I decided to write a book about the inner world of age, the psychological and spiritual promises of aging consciously, as well as the inner obstacles to aging with awareness, my new purpose became official.

Now is the time, as thousands of us turn 65 every day, to fight for age equality, to counter negative media portrayals, and to create positive social policies. But Levy’s research shows that activism is not enough: We need to uncover the inner ageist in each of us and root it out so that we can discover the treasures of late life—its freedom, creativity, and opportunities to grow and serve something larger than ourselves.

Dr. Connie Zweig recently retired after 30 years as a therapist in Los Angeles. She extends this work into late life with The Inner Work of Age: Shifting from Role to Soul, which explores aging as a spiritual journey. She is a Certified Sage-ing Leader with Sage-ing International and can be reached at conniezweig@gmail.com.