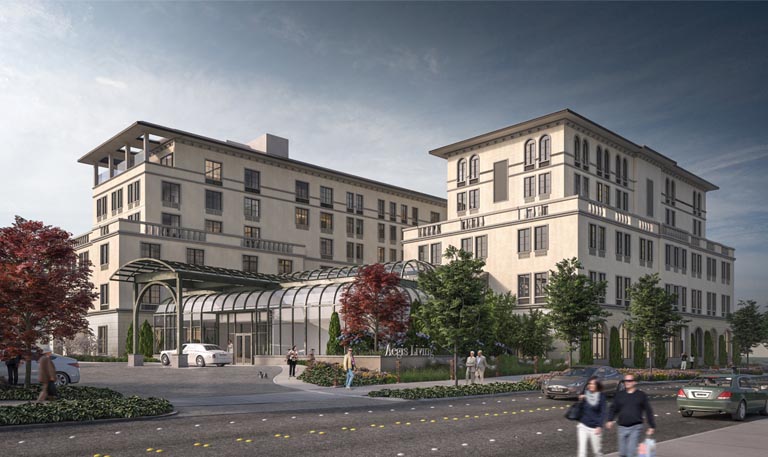 Cutting-Edge Communities for Older Adults Are Surging in our Region

The Puget Sound skyline sports a now familiar ridge of construction cranes that reflects the region’s youthful tech boom and population growth. Look a little closer, though, and you’ll see a different kind of expansion underway—robust development of vibrant communities for mature adults.

A handful of examples illustrate the point.

Bellevue-based Aegis Living, which offers premium assisted-living and memory-care options, plans to double its number of communities by 2030, and currently has six Seattle projects either in the pipeline or under construction. This year, the company also breaks ground on a community in San Rafael, adding to an established California presence.

SHAG (Sustainable Housing for Ageless Generations) depends on the federal tax credit program to operate 26 local independent-living communities, with plans to move beyond the Puget Sound area in the future, taking its focus on affordable retirement living to a national audience.

With properties in eight states, family-owned Koelsch Communities is building a $93 million assisted-living and memory-care project in Belle Harbor, Bellevue, as well as other memory-care communities in both Kirkland and Puyallup.

A major development is going up north of Seattle where Quail Park of Lynnwood has 96 assisted-living apartments under construction along with 26 luxury, independent-living cottages.

No surprise, the need for additional and varied communities is, in part, driven by the Baby Boom. Born between 1946 and 1964, this generation is now retiring in droves with population intensity building for many years to come. Factor in that people are living longer, an increased demand for services is clear.

“There are tectonic shifts happening in senior housing with lots of players in the game, both for-profit and nonprofit,” says Kris Engskov, president of Aegis Living. “We’ll have more people over the age of 75 by 2025 than people under the age of 18. That’s never happened before.”

In addition to the need for more living spaces for more people, companies are building now because they can, says Aaron Koelsch, president, and chief executive officer of Koelsch Communities. “During the recession, building construction came to a near standstill. They couldn’t find bank partners, and yet our country did not stop aging. Now we’re catching up to that pent-up demand. Financing is far more available, and it’s not expensive.”

Yet another driver of retirement construction is the money to be made, at least for the higher-end properties. “Yes, absolutely, if done right, or we wouldn’t be able to get financing,” Koelsch says. “There are rewards for the risk taken.”

According to the article “Winners and Losers as Oregon’s Population Ages” on the website OregonBusiness.com, investment profit on adult communities can beat out apartment or commercial buildings. “The companies investing in elder-care projects reap big profit margins.  It continues, “With big profits, many private-equity firms and institutional investors are moving into senior housing. The sector is also attracting interest from abroad.”

That’s a reversal from the past, notes Beth Burnham Mace, chief economist at the Annapolis-based National Investment Center for Senior Housing and Care, also known as NIC. The nonprofit conducts research, offering valuable data and analytics for investors as well as to providers of housing and care.

“Twenty-five years ago, there wasn’t the comfort-level from investors that there is now,” she says. “Today, we have more transparency, more data, and investors are more knowledgeable about both the opportunities and the challenges of investing in this property type. They also see senior housing as more recession-proof, especially assisted living, due to its need-based services. If you’re an investor, you like that because it takes away some of the risk in economic cycles.”

The money tends to flow toward premium properties, and Mace would like to see affordable, middle-income communities share in the bounty. “Investors want good returns, of course, but I’m asking, can’t there be a social responsibility aspect we can talk about?”

As the quantity of mature communities changes, so does the quality. We’ve come a long way from the old model of nursing homes, with the Boomer wave ushering in an age of innovation.

“They [Boomers] never accepted the status quo. They’re always looking for what’s new,” says Keri Pollock with Aging Wisdom, a consulting and care management practice for older adults and their families. “There are all kinds of alternatives now, from virtual villages to continuing care,” she says.

As an example of progressive change, Pollock points to an innovative eight-story LGBTQ retirement apartment building under construction on Seattle’s Capitol Hill, The Eldridge.

“The sad reality is, older LGBTQ folks may be stigmatized in some settings,” says Pollock. “This will be a welcoming and affirming place, the first of its kind in Washington State.”

Care for the environment is a birthright of this generation. Earth Day began in 1970. It’s no wonder that adult communities also embrace those values. Last year, Aegis Living broke ground on a property along the Kirkland waterfront that’s billed as the “greenest senior living building in the world.”

Kris Engskov with Aegis explains that the company continually gauges the desires of its customers and adapts to meet them. “Their expectations are very different from the last generation. People want experiences. It’s integrated into how they live.”

He adds that these communities must also appeal to the grown children of older adults. “In urban markets we’re seeing adult children bringing their parents closer to them, where they work, especially in Seattle and San Francisco, the tech hubs.”

And the kids favor amenities, engagement and innovation. Responding to that demand, more and more communities are adopting a hotel model of service, complete with concierge.

“We call it living in place rather than aging in place,” says David Haack, executive vice president and chief marketing officer with Living Care Lifestyles, which operates Quail Park properties in Washington, California, Arizona, and Texas.

Always looking for new ways to engage, the company launches an educational experiment this spring called Quail Park U in which a small cohort follows a six-month curriculum that includes exercise and nutrition classes. Haack says, “If it’s popular, and I expect it will be, we’ll be introducing Quail Park U this year to our entire Lynnwood campus.”

Early on, his company embraced technology, including virtual reality (VR) sessions at the memory-care community of Quail Park, West Seattle. Research shows that VR can enrich the lives of people dealing with dementia. “People want to be recognized not marginalized,” says Haack.

Cutting-edge technologies are an increasing feature of adult communities. Consider the new Koelsch assisted-living and memory-care project under construction in Belle Harbor, Bellevue. “The memory-care community is three stories rather than ground level,” Aaron Koelsch says. “To address safety and access, we’ve taken tech to another level. On a scale of 1-10, this is a 10. There are cameras, advanced calling and alarm systems, as well as other safety and security technologies.”

“We’re trying to help people who don’t have access to higher-end options, which is most people. We develop and produce housing in an efficient way, relying on federal tax credits,” Woolford says. “Our model also encourages diversity. We mirror the local population, with multiple cultures from different backgrounds. Our objective is to be part of the broader neighborhood, not an isolated island of seniors in a service desert.”

Regional sales manager Susan Dale explains that they utilize resources in the community to expand what they can offer. “To enrich lives, we partner with senior centers, the YMCA, local schools and others. Ours is a unique model in the industry, aiming at the middle class who have worked hard all their lives.”

While these families typically have savings, a pension and a home, Care Partners works to make sure people don’t outlive their means. Dale says, “We’re dedicated to easing the stress on families. Our residents can spend down to Medicaid. We offer excellent care, comfort and community.”

Going forward, every bit of ingenuity from all stakeholders will be needed to successfully navigate this brave new world of living options for mature adults. “We’re taking care of that first wave now,” says Aegis’s Kris Engskov. “The next wave lands in 20 years. We are just getting started.”

Connie McDougall is a former news reporter and current freelance writer of nonfiction and personal essays. A lifelong student and proud English major, she has pursued lessons in flying, scuba diving, tai chi, Spanish, meditation, hiking and, most recently, Zumba.