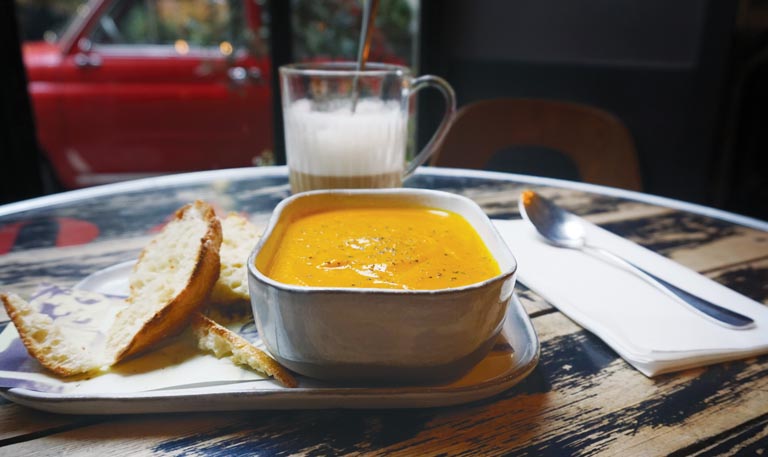 How to Travel Abroad with a Sustainable Future in Mind

Paris. Global epicenter of culture, fashion, and art. Site of the 2015 Paris Agreement committing 195 countries to combat climate change. Paris—which adopted its own 2020 goals to reduce its energy consumption by 25 percent and nitrogen oxide levels by nearly half. And more suprisingly, to increase its urban agricultural output, since food production generates 40 percent of the city’s carbon footprint.

In Paris for a week last October, I wondered how I could be an eco-tourist embracing the city’s laudable eco-goals. Were there responsible tourist practices that would still let me enjoy the culinary, historical, and shopping delights of the City of Lights? I discovered there were, and I found a delightful slice of Paris I would have otherwise missed. I also learned useful eco-tips for future travels, and I was able to mitigate my trip’s environmental impact even before I left home with plenty of focused research and some helpful smartphone apps.

My flight from Seattle spewed 1.5 tons of carbon dioxide into the ozone according to the website co2.myclimate.org, so offsetting my Paris transportation footprint was my first commitment. Jet-lagged on arrival, taking a taxi from the airport to my accommodation would have been the much easier choice. But pre-trip research provided precise instructions for catching a train from the airport into the city, including where and how to buy tickets. I intentionally booked an Airbnb accommodation close to Metro stops and within walking distance from the Gare du Nord train station.

Many websites and tourist maps explain how to navigate the Paris Metro system and buses, but given the upbeat weather during my stay, I was able to traverse the city by walking and on two wheels. Velib’ Metropole, the city’s best-known public bike-sharing system, operates a fleet of over 14,000 distinctive bikes available for pickup and drop-off anywhere at 1,200 docking stations throughout the city. Several additional startup companies have expanded the city’s public bike fleet, and Lime’s electric standing scooters offer another alternative. I’m not a confident urban biker and the last time I rode a scooter was in elementary school, but if I stuck to neighborhood streets and urban walkways, both proved to be useful modes of transportation when I got tired of walking.

France already makes some environmentally healthy food consumption choices for its visitors. The country prohibits the cultivation of crops with genetically modified organisms. Organic food (called bio in France) can be found in specialized bio grocery stores located throughout the city. Vegetarian and organic restaurants and teashops are ubiquitous. And there’s that 2020 goal of increasing urban agriculture. Was it possible to navigate the gastronomical delights of Paris largely patronizing food outlets with green practices?

My starting point was the City of Paris website’s link called Sustainable Tourism. It promotes Merci, a store within walking distance of my apartment; Café Pinson in the Marais, a 100 percent organic restaurant; and Violetta et Alfredo, a bio tea and pastry salon with a playlist of opera music near the Follies Bergere theatre. Merci happened to already be a favorite Paris haunt of mine with its moody coffee shop lined with used books. This time I discovered that its basement restaurant, La Cantine, has a farm-to-table seasonal menu and donates its profits to local charities protecting women and children. My lunchtime meal there was both environmentally responsible and philanthropic.

Before leaving home, I’d downloaded the free smartphone app FairTrip, a crowdsourced guide to global sustainable tourism. The app promotes restaurants, accommodations, and activities that meet its guidelines which include respect for local heritage; benefit to the local community; environmental water, waste, and energy management; fair wages for employees; and a short food supply chain. Paris is a FairTrip hotbed of recommendations including several I frequented in my Airbnb’s neighborhood.

To support the city’s urban farming initiative, I walked to the Bastille Sunday Market—a colorful outdoor tradition in the shadow of the Bastille Monument with over 100 stalls of fruits and vegtables, cheese, meats, breads, pastries, fish, and non-food items. While grazing through a box of strawberries picked hours earlier and deciding what to cook for dinner, I enjoyed an entire morning among street musicians and Parisians going about their Sunday tradition of buying baguettes, haggling over cuts of meat, and taste-testing cheeses.

Paris is a city that encourages eco- and budget-friendly hours doing nothing but people watching and admiring the artistic windows of small shops. I limited my shopping to organic or fair-trade stores, which is how I found Bleu de Cocagne Boutique, a tiny shop selling only organic, indigo blue clothing dyed with woad leaves grown in France—the oldest dying technique in the world. Storie, a shop I found on the FairTrip app, sells handmade fair-trade items and emphasizes living wages and recycling. I was happy to spend euros there on a handwoven scarf. Even the high-end Galleries Lafayette Paris Haussmann (worth a stop to admire the interior architecture) now sells a line of clothing called “Go for the Good”—organic, vintage, and up-cycled clothing that meets environmental specifications.

Strolls on the Green Side

On the first Sunday of each month, Paris shuts down the Champs Elysees to cars and encourages Parisians to walk or cycle its length. Promenading the most famous avenue in the world was not only a pleasant Sunday afternoon, but I supported the city’s goal to reduce emission levels.

A used book from Merci, tins of organic tea, that handmade scarf, and a bottle of French organic wine (from the Bordeaux region where 60 percent of the vineyards are organic) took up more luggage space than expected. I could buy another bag, or I could jettison articles. Fortunately, France has a history of recycling dating back to the 16th century and now recycles 65 percent of its waste. A book from home was re-homed at a used bookstore. I discovered Oxfam France stores, an organization taking donated goods which are sold to support Oxfam’s health and climate change initiatives. La Relais places charity clothing bins throughout Paris for donations. The one in my neighborhood was an easy drop-off for items I’d packed with intent to donate at trip’s end.

My Paris eco-experiment was revealing, even for me—a seasoned traveler. I’ll be checking to see if my next destinations are among the 195 signatories to the Paris Agreement (the U.S. withdrew in 2017) and I’ll do pre-trip research to learn more about their efforts. When you travel, make a commitment to search out and support local, environmentally sustainable businesses. While there’s an entire genre of tourism advertising responsible travel to unspoiled environments, authentic eco-tourism should be more than a travel destination. It should be a mindset no matter where one travels.

Ann Randall is an independent traveler and writer who loves venturing to out-of-the-way locales from Azerbaijan to Zimbabwe. A former educator, she now observes international elections and does volunteer work in India. Her articles have appeared in online and print publications and she blogs at PeregrineWoman.com.